The first delisted stock in the Year of the Tiger: the chairman of financial fraud has been banned from the market for life 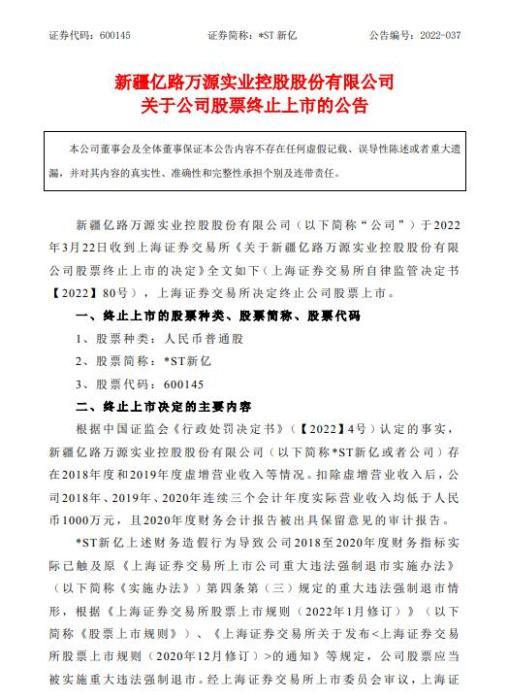 This also means that *ST Xinyi became the first delisted stock in the Year of the Tiger.

The decision to terminate listing shows that, according to the facts identified in the China Securities Regulatory Commission's Decision on Administrative Punishment ([2022] No. 4), *ST Xinyi has inflated operating income in 2018 and 2019.

After deducting the inflated operating income, the actual operating income of the company for three consecutive fiscal years in 2018, 2019 and 2020 was less than RMB 10 million, and the 2020 financial accounting report was issued with an audit report with a qualified opinion.

*ST Xinyi's above-mentioned financial fraud has resulted in the fact that the company's financial indicators from 2018 to 2020 have actually reached the situation of major illegal forced delisting stipulated in the original "Shanghai Stock Exchange Implementation Measures for Major Illegal Forced Delisting of Listed Companies". According to relevant regulations, *ST Xinyi shares should be delisted for major violations of law.

The announcement shows that *ST Xinyi has false records and major omissions of illegal facts. Huang Wei, as the chairman, chief financial officer, secretary of the board of directors and the actual controller of the listed company, occupies a central position in *ST Xinyi’s information disclosure violations, organizes, Planning and implementation of information disclosure violations, Huang Wei's violations were particularly serious, and the China Securities Regulatory Commission decided to ban Huang Wei from entering the securities market for life.

The legal representative Li Yong was given a warning and a fine of 3 million yuan.

The Measures for the Administration of Stock Transactions on the Risk Warning Board of Shanghai Securities Trading clarifies that individual investors who buy delisted stocks should have more than 2 years of stock trading experience, and the securities accounts and capital accounts opened in their own names should be in The daily average of the 20 trading days before the opening of the application authority (excluding securities and funds acquired through margin financing and securities lending transactions) should be more than RMB 500,000.

Individual investors who do not meet the above requirements can only sell the delisted stocks they already hold.

Although *ST Xinyi is facing delisting, the relevant responsible persons cannot be exempted from orders.

According to China Business News, legal sources said that in the process of delisting a listed company, investors can rationally claim shareholder rights through legal channels. On the other hand, after the company is terminated from listing, although its shares are not traded on the Shanghai Stock Exchange, its assets, liabilities, operations, profit and loss, etc. have not changed because of this, and it can still operate normally.

Moreover, after the termination of listing, the company's shareholders can still transfer shares according to regulations.

These stocks are also at risk of delisting

After *ST new billion, *ST, which has the risk of delisting, has become the focus of the market.

The announcement shows that *ST Jitang has 21 risk warning announcements about being terminated from listing. The company is suspected of illegal information disclosure, and its net profit has been negative for four consecutive years.

A risk alert on October 26 last year showed that the company's shares were at risk of being terminated from listing because the daily closing price for 20 consecutive trading days was lower than 1 yuan.

In addition, on March 23, Yihua Health disclosed the "First Indicative Announcement on the Possible Delisting Risk Warning and Other Risk Warnings for Stock Trading". Due to the "2021 Annual Performance Forecast", the company is expected to be listed in 2021. The net profit of the company's shareholders and the net profit attributable to shareholders of the listed company after deducting non-recurring gains and losses are losses, and the owner's equity attributable to the parent company is negative.

From March 14 to March 18, 2022, the Shanghai Stock Exchange will focus on monitoring the delisting risk warning stocks such as *ST Chengxing and *ST Shida.