The collapse of the exterior wall of HDC Hyundai Industrial Development Hwajeong I-Park in Gwangju last January was confirmed to be a human resource caused by poor management including construction and supervision. 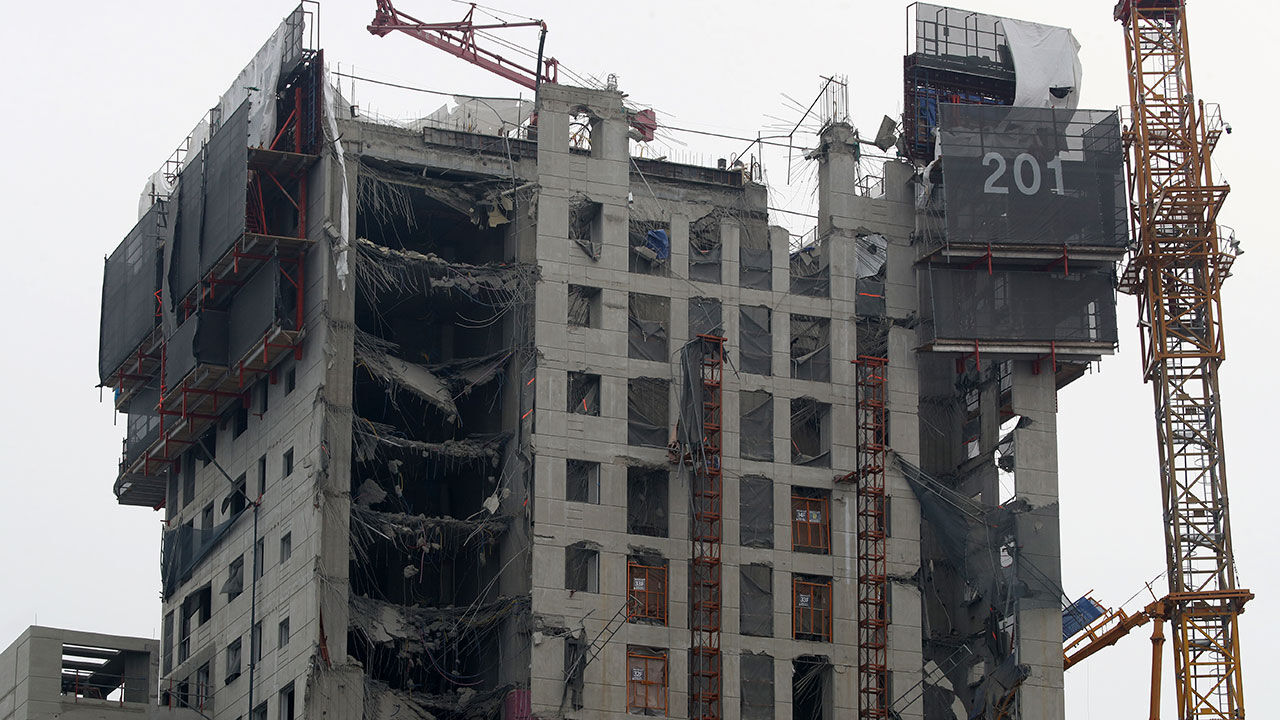 The collapse of the exterior wall of HDC Hyundai Industrial Development Hwajeong I-Park in Gwangju last January was confirmed to be a human resource caused by poor management including construction and supervision.

It turned out that the construction method of the floor on the 39th floor, where the collapse began, was changed without permission, unlike the design, and the temporary support (dongbari), which should span three floors, was removed early, causing continuous collapse.

The strength of the concrete fell far short of the standard due to poor raw materials and poor construction, and it was found that the original contractor, Hyundai Industrial Development, had poorly managed the overall construction.

The 'Hyundai Industrial Development Apartment Construction Collapse Accident Investigation Committee' (Sajo Committee) of the Ministry of Land, Infrastructure and Transport announced today (14th) the results of an investigation into the collapse of the Hwajeong I-Park construction site in Gwangju.

The PIT floor is a separate space for installing pipes between the 38th and 39th floors.

The building collapse, which started at the lower part of the 39th floor, progressed to the 23rd floor, leading to a major accident in which slabs, exterior walls, and columns of 16 or more floors continuously collapsed.

Six workers were killed and one was injured in the accident.

The Sajo Committee identified three major causes of accidents in terms of structural and construction safety.

First, as a result of the investigation, it was revealed that the construction method and support method of the 39th floor were arbitrarily changed at the site from the original design.

While pouring concrete to make the floor on the 39th floor, it was investigated that a concrete temporary wall was installed instead of installing a copper bar on the PIT floor.

As a result, the load applied to the bottom of the PIT layer increased to 24.49kN/m2, 2.26 times higher than the 0.84kN/m2 expected in the design, and the load was also concentrated in the center, causing collapse.

Sajowi explained that if the copper barrier had been installed on the PIT floor as designed, the collapse would not have started during the concrete pouring process on the 39th floor.

In particular, it was found that although there was a discussion about installing a concrete temporary wall on the PIT layer at the site, the accident could not be prevented because the structural design safety inspection was not conducted accordingly.

In addition, it was investigated that the dongbari, which should be on three floors of the 36th to 39th floors, was demolished early, causing the continuous collapse of the building.

According to the standard specification for building construction, in the case of a high-rise building under construction, at least three floors below must be installed to receive the load coming down from the top.

The exact cause of the early demolition of Dongbari is being investigated by the police.

The fact that the strength of concrete was significantly below the standard was also cited as the cause of the accident.

According to the Sajo Committee, as a result of testing the strength of a concrete specimen taken from a collapsed building, the strength of 15 out of 17 floors did not meet 85% of the standard strength, which is the allowable range, and was evaluated as rejected.

If the concrete strength is insufficient, it will not adhere well to the reinforcing bars, leading to reduced safety.

The Sajo Committee said, "The main cause of the deterioration of concrete quality is judged to be caused by defective raw materials and additional factors in the manufacturing and pouring stages. said.

It was also found that the construction management of the contractor and supervisor was poor.

When changing the apartment structural design, Hyundai Development Company missed the review cooperation with the architectural structural engineer, and the supervisory team did not properly inspect the detailed processes such as formwork installation, reinforcing reinforcement, and concrete pouring.

In particular, the failure to detect the removal of copper bars from the 36th to 39th floors and approval of the follow-up process was cited as the cause of this accident leading to a major accident.

According to the results of the analysis of the cause of the accident, the investigation committee will ▲ improve the procedure to confirm compliance with relevant laws and regulations and construction standards ▲ strengthen the independent status and work function of construction supervision ▲ strengthen construction material supply and construction quality management ▲ prevent recurrence of cooperation management system improvement with partner companies suggested a plan.

Kim Gyu-yong (Chungnam National University professor) said, "The final report will be submitted to the Ministry of Land, Infrastructure and Transport in about three weeks by summarizing the results of the investigation analyzed so far and supplementing the details."

(Photo = provided by the Ministry of Land, Infrastructure and Transport, Yonhap News)