US and European stock markets fell sharply, the Nasdaq fell into a bear market! Sanctioning Russia against itself? 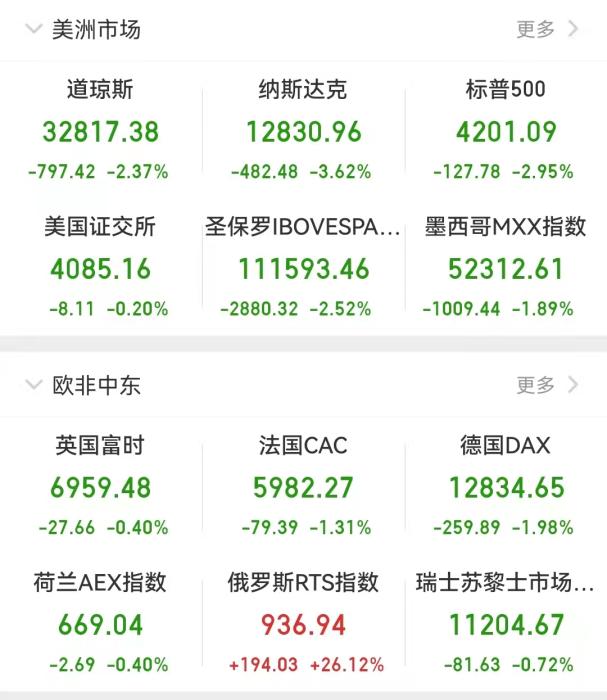 On the 7th, with the progress of the third round of negotiations between Russia and Ukraine, the European and American stock markets experienced a "horrifying day".

After the Asia-Pacific stock markets closed down one after another, on the 7th local time, the U.S. stock market fluctuated downwards.

and fell 20% from its all-time high in November 2021, falling into a bear market

On the 7th local time, Russia and Ukraine held the third round of Russia-Ukraine negotiations in the Belovezh Forest in Belarus.

According to RIA Novosti, the negotiations that day lasted nearly 3 hours.

During the negotiation, the two sides continued to discuss the political and military aspects, but the progress was not smooth, and the expected effect of Russia's negotiation with Ukraine did not materialize.

At the same time, international oil prices are still soaring.

Brent May crude futures rose 4.3 percent to $123.21 a barrel on Monday, their highest settlement since April 2012.

April WTI crude oil futures closed up 3.21% at $119.40 a barrel, hitting a new closing high since September 2008 for the second consecutive trading day.

Chen Li, chief economist of Chuancai Securities, believes that in the short term, the dilemma of tight energy supply is difficult to solve, and it is expected that international oil prices will continue to maintain a volatile upward trend.

With food and commodity prices higher, the global inflation situation has further deteriorated, which will increase the pressure on the Fed to raise interest rates, and the Fed may adopt a more aggressive monetary policy to deal with rising inflation pressures.

"On the whole, it is difficult to predict the duration of this geopolitical game. It will disturb the market in the short term, and the downward pressure on European and American stock markets is still relatively large."

"Historical experience shows that whenever oil prices soar to high levels with an alarming momentum, U.S. economic recessions always follow, and this time may be an exception." Hong Hao, chief strategist at Bank of Communications International, pointed out that the soaring oil prices have exacerbated inflationary pressures , increasing macro uncertainty and keeping the Fed constrained in its policy choices — especially at this juncture.

Therefore, the global market will continue to be shaken in the short term, and the deteriorating US market may spread to the Quartet.

"The stock market is grappling with a commodity supply shock, especially oil prices, and concerns that this could turn into a stagflation shock, not just an inflation shock," said Kathy Bostjancic, chief U.S. economist at Oxford Economics. "The stock market will determine oil prices." changes and the prospect of a Russian oil embargo.”

In response to the United States' desire to join European allies to further sanction Russia and study the possibility of banning the import of Russian oil, Russian Deputy Prime Minister Novak warned on the 7th that

the abandonment of Russian oil by the West would have catastrophic consequences for the world market.

The ban on Russian oil will lead to a surge in the prices of fuel, electricity and heating in Europe and the United States. It is impossible for the European market to seek a quick replacement for Russian oil. It will take at least a year. As prices rise, European consumers will be the main victims. .

According to news from the Russian Satellite News Agency on the 7th, German Chancellor Scholz said that Russia’s energy exports were not sanctioned because there was currently no other way for Europe to protect its own energy needs.

Investors are also focusing on the potential economic consequences of disruptions to global energy supplies as the conflict between Russia and Ukraine continues.

According to foreign media reports, top strategists including Citi, UBS, Yardeni Research and Evercore ISI have all lowered their outlook for the U.S. stock market amid geopolitical tensions.