If I buy isolation insurance, will I be able to pay if I am quarantined? Not always

"Recently, I heard that several friends' communities around me were closed and managed, so I bought a quarantine insurance, thinking that at least if I was quarantined, there were still thousands of dollars to take, and the insurance premium should be two cups of coffee less. ." Miss Gu, who just purchased isolation insurance, told the First Financial Reporter.   There are not a few people who 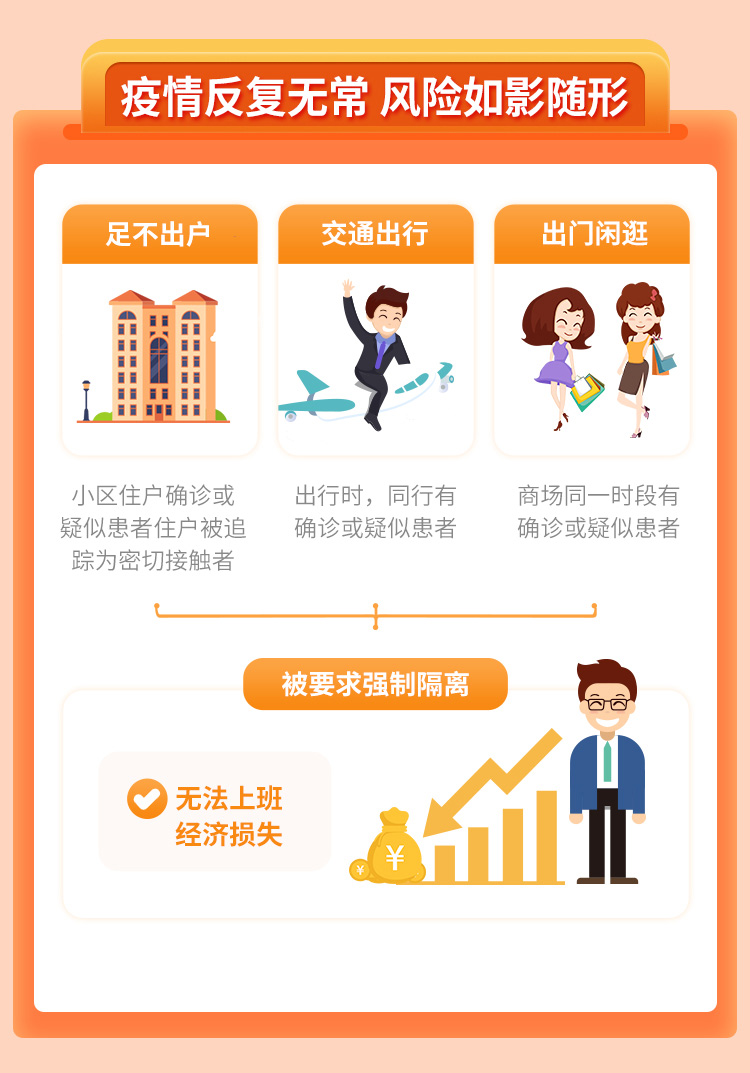 "Recently, I heard that several friends' communities around me were closed and managed, so I bought a quarantine insurance, thinking that at least if I was quarantined, there were still thousands of dollars to take, and the insurance premium should be two cups of coffee less. ." Miss Gu, who just purchased isolation insurance, told the First Financial Reporter.

There are not a few people who think like Miss Gu.

In fact, with the repeated epidemics in many cities and the continuation of prevention and control measures, isolation insurance has become a hot-selling insurance recently.

However, will I be eligible for compensation if I am quarantined?

After checking the terms of various isolation insurances on the market, a reporter from Yicai found that the answer is "not necessarily".

"Don't worry about isolation", "As long as 9.9 yuan, you can get 200 yuan a day", "Let the insurance company pay you wages during the isolation period"... Under the repeated epidemics, the above marketing slogans began to continue in the circle of friends of some insurance salesmen appear.

These slogans are thrown out because they want to recommend a product called "isolation insurance".

Since the fourth quarter of last year, the sales volume of "isolation insurance" has increased significantly, and the monthly average number of insured items on a certain agency sales platform has even exceeded 10,000.

The guarantee period of most products ranges from 1 month to 1 year, the premium is usually less than 100 yuan, and the isolation allowance ranges from a few hundred yuan to thousands of yuan per day.

Li Wenzhong, deputy director of the Insurance Department of Capital University of Economics and Business, wrote that there are two main reasons for the popularity of "isolation insurance": First, under my country's current epidemic prevention and control measures, anyone who is found to be infected with the new coronavirus or a close contact will have a A large number of people are isolated, and work and life will be affected to a certain extent. Therefore, this isolation risk will lead to a large amount of insurance demand. Second, the premiums of "isolation insurance" currently on the market are only a few yuan as low as a few yuan, and generally only a few more expensive. Ten yuan, once the insurance claims conditions are triggered, you can get hundreds of yuan or even thousands of yuan per day. The premium is affordable for most people. The cheap premium and high leverage ratio have inspired many people's willingness to buy.

From the perspective of insurance companies, insurers also believe that the inclusion of quarantine allowances in the scope of insurance liability is another exploration by insurance companies to deal with epidemic prevention and control and meet market demand after the expansion of the new crown protection responsibility. and other economic losses to give certain economic compensation.

Will I get paid for being quarantined?

Although isolation insurance can bring a little risk compensation to isolation life, but the premise is how to meet the insurance company's claims conditions?

In fact, after carefully studying the provisions of various isolation insurances, it can be found that the isolation allowance has very strict requirements for "isolation". As Miss Gu mentioned, it is because they are quarantined at home in the same community as those who are diagnosed or in close contact. This is in most products. are not eligible for compensation.

Taking one of the best-selling products as an example, for the quarantine allowance, the clause stipulates that after the policy takes effect for a 2-day waiting period, the insured will have close contact with the new crown patient during the insurance period, or be notified by the local government or the epidemic prevention department due to being in a medium and high-risk area. If centralized isolation or home isolation is required, the insurance company will pay the specific infectious disease isolation allowance according to the actual isolation days of the insured.

That is to say, the isolation allowance must meet one of two conditions, that is, the confirmed person is in close contact or is isolated in a medium and high-risk area, and the more common situation is that the second-close contact or the same community as the close contact is not eligible for compensation. required.

According to the observation of a reporter from China Business News, many other similar products have more stringent claims conditions. Some only include centralized isolation, and there are also some isolation allowances attached to traffic accident insurance. When it is necessary to take the transportation agreed in the contract, Because the close contact with the confirmed patients requires mandatory centralized isolation at their own expense, the subsidy can be paid.

In addition, global management and control, health monitoring and other situations are not within the scope of isolation allowance claims.

"Easy to buy and difficult to pay" makes isolation insurance the "hardest hit" of recent complaints from the insurance industry.

The Yicai reporter searched on the black cat complaint platform with the keyword "isolation insurance". As of the evening of March 7, there were 1,744 related content, and most of the consumers encountered difficulties in claim settlement.

An executive of a property insurance company told the First Financial Reporter that in order to promote sales, some insurance companies will focus on low prices and high compensation when promoting isolation insurance, while disclaimers and claims restrictions are limited. It is more diluted and prone to misleading.

At the same time, this type of insurance is usually sold through Internet channels, and the policyholders need to understand the terms themselves. Some policyholders have not even read the terms and only purchase insurance based on the product introduction, which is prone to disputes.

Tian Jingting, a judge of Beijing Xicheng Court, wrote and analyzed that according to the "Insurance Law", the insurer bears the burden of proof for the reminder that it fulfilled the exemption clause.

In addition to the difficulty in settlement of claims, the Yicai reporter noticed on the complaint platform that the high-frequency complaints involved in isolation insurance also include disputes caused by the difference between the insured and the insurance company on the start of the isolation period; and isolation insurance and air tickets, trains Bundled sales of tickets, etc.

On the road to norms

The chaos that isolation insurance has created during the heat has also caught the attention of regulators.

At the end of January this year, the China Banking and Insurance Regulatory Commission issued the "Emergency Notice on Regulating the Operation of the "Isolation" Allowance Insurance Business (hereinafter referred to as the "Notice"), which directly pointed to the pain points in the sales process of isolation insurance.

The "Notice" requires insurance companies to correct their business philosophy. In the process of developing and designing insurance products, they should be people-centered, based on the actual needs of insurance consumers, and comprehensively consider insurable interests and risks. Develop products in accordance with regulations, and set reasonable conditions for liability exemption and claims settlement.

At the same time, in the process of publicity and sales, insurance companies are required not to make misleading publicity or explanations on important situations such as insurance product protection responsibilities by means of deception, concealment or inducement, and must not aim to win the attention of consumers. Carry out one-sided publicity and malicious hype; and fully explain insurance liability, liability exemption and claims conditions, etc., and make prompts and explanations on clauses exempting insurers from liability in accordance with laws and regulations that are sufficient to attract the attention of policyholders.

"After the regulatory notice was issued, I feel that the isolation insurance in the market has become more standardized, and some exaggerated slogans such as '0 yuan for the first month' have basically disappeared. In fact, this is a good innovative product, in this special There is a certain insurance demand and risk protection value in the period. It is not a 'gimmick' product. It would be a pity if it was screwed up due to some improper sales behavior. At the same time, I also hope that the insured chooses the product rationally and carefully checks the terms when purchasing. In order to avoid disputes arising from deviations in understanding." said the executive of the above-mentioned property insurance company.

A reporter from China Business News found that there are already isolation insurance products with "special reminders" at the top of the introduction page, and "red letters are bolded" for some major situations that cannot be insured and cannot be compensated.