Lanzhou vegetable farmers and husbands: the plateau summer vegetable business, to be each other's "best partners"

China News Service, Lanzhou, March 5th (Zhang Jing and Li Yalong) When the time comes to be shocked, all things are sprouting. In Lujiaya Village, Jinya Town, Yuzhong County, Lanzhou City, there is a plateau summer vegetable planting base covering an area of ​​50 acres. The wind in the early spring blew the plastic film of the greenhouse and merged with the Loess Plateau. It was bleak and desert 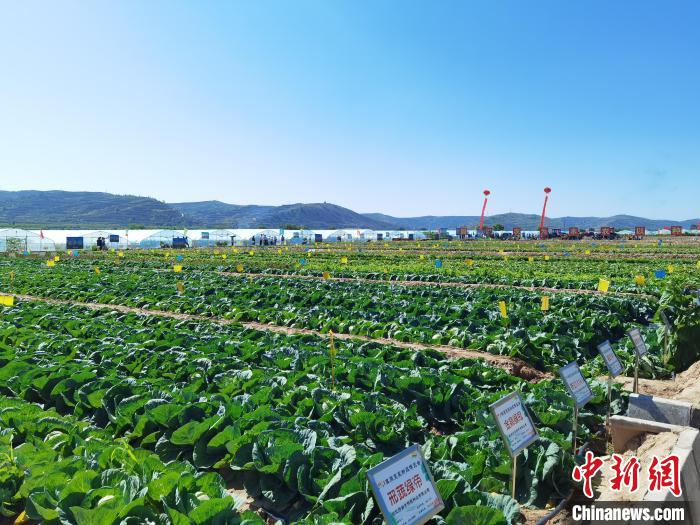 China News Service, Lanzhou, March 5th (Zhang Jing and Li Yalong) When the time comes to be shocked, all things are sprouting.

In Lujiaya Village, Jinya Town, Yuzhong County, Lanzhou City, there is a plateau summer vegetable planting base covering an area of ​​50 acres. The wind in the early spring blew the plastic film of the greenhouse and merged with the Loess Plateau. It was bleak and deserted, but it got into the greenhouse. At that moment, the warmth and humidity hit the face, the body temperature was nearly 30 ℃, and the assembly-line vegetable workers were working in full swing.

Lu Jinhuan and his wife traveled back and forth between several greenhouses, starting from spreading seeds on a flat plate, how to operate, how many spacings, and covering them with plastic to keep them moisturizing, and then transplanting, raising seedlings, and storing them in cold storage in a square grid. In the end, when it comes to exporting, the figure is frequent, and it is necessary to guide the villagers from time to time.

Lu Jinhuan said that he was a vegetable seller 20 years ago, and after marrying his wife, he had more partners on his business journey.

He is taciturn and calm, and is suitable for making big decisions, while his wife Zhang Caixia has a completely different personality and is good at communication. Usually, she deals with her business contacts.

Zhang Caixia said that the two complement each other's personalities, which prompted them to be each other's "best partners" in the business of plateau summer vegetables.

At first, it was purchased from surrounding vegetable farmers, and then it was sold in the market after getting up early and late at night.

Yuzhong County is the birthplace and main producing area of ​​summer vegetables on the Lanzhou Plateau. It is planted at an altitude of 1400 to 2400 meters, including more than 30 vegetable varieties such as cauliflower, broccoli, cabbage, green bamboo shoots, celery, and Chinese cabbage.

The local area has been recognized as a production base by the "Vegetable Basket" Office of the Guangdong-Hong Kong-Macao Greater Bay Area, and also has regional public brands of sweet agricultural products such as "Lanzhou Plateau Summer Vegetables" and "Yuzhong Chinese Cabbage".

Lu Jinhuan, who has been in business for many years, is optimistic about the "money" scene of this development, and discussed with his wife about transferring land to build a greenhouse.

"However, when the greenhouse is built, how to plant and manage it?" Lu Jinhuan was in trouble. At this moment, the director of the village committee brought good news, saying that there was a place in the village who could go to Gansu Agricultural University to study vegetable greenhouse cultivation. .

Lu Jinhuan, who only had a primary school diploma, never thought that he could step into a university campus because of planting plateau summer vegetables.

"It was 2016, and I have a deep memory." He said that after continuous training for half a month, he systematically mastered greenhouse temperature, seed disinfection, vegetable planting, etc. This also became the beginning of his professional learning about greenhouse planting.

Since then, he has also participated in Yuzhong County and township agricultural technology professional training courses many times.

The husband and wife changed their thinking, from simple vegetable porters, to learning about the cultivation and planting of plateau summer vegetables, and trying to be "skilled workers" in the vegetable industry.

When the greenhouse planting was on the right track, they obviously felt that there was a shortage of manpower, so they recruited "idlers" who came to the village to do odd jobs.

Today's Lu Jinhuan and his wife employ an average of 50 to 60 people per day, and they look forward to further expanding the scale of planting, so that more people can profit from plateau summer vegetables.

Lu Kongchang, secretary of the party branch of Lujiaya Village, said that the village has more than 3,000 mu of irrigated land, mainly planting vegetables, thanks to the leading role of Lu Jinhuan and his wife.

Next, the village will also use this to develop the village's collective economy, expand the scale of planting, and at the same time allow local villagers to obtain greater profits.

The reporter learned from the Agriculture and Rural Affairs Bureau of Yuzhong County that Lujiaya Village is only a microcosm of the local planting of plateau summer vegetables. In recent years, the county has reasonably arranged the vegetable sowing dates, listed them in stages, and extended the harvesting and listing period to make up for the shortage of summer vegetable supply in the southern coastal areas. .

Up to now, Yuzhong County has cultivated 88 vegetable distribution enterprises with a total storage capacity of 200,000 tons, cultivated 480 various vegetable production and sales cooperatives, and more than 200 distributors. The annual export of vegetables is 1.3 million tons, which are sold to more than 60 countries across the country. More than 80 specialized wholesale markets for agricultural products in the city.