Yesterday, flydubai launched its first flight to the Saudi city of Al-Ula, becoming the first Emirati airline to provide direct flights from Dubai to this city.The airline operated its inaugural flight with a Boeing 737 Max aircraft, which comes with a design that provides flexibility, reliability and efficiency. high, within the 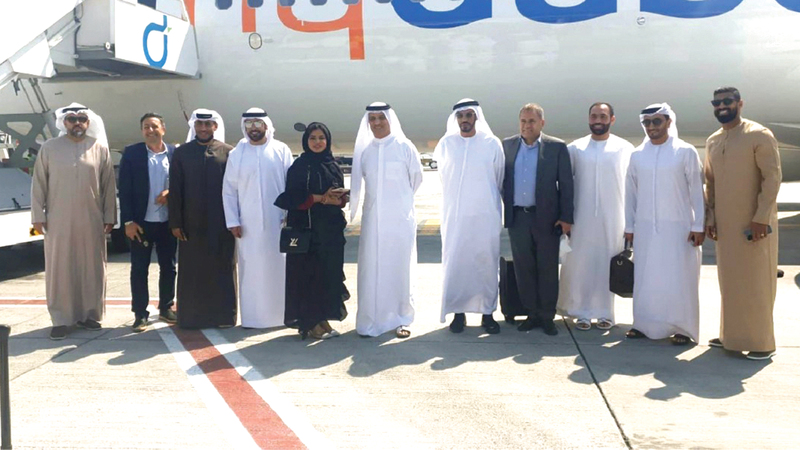 Average of two trips per week

Yesterday, flydubai launched its first flight to the Saudi city of Al-Ula, becoming the first Emirati airline to provide direct flights from Dubai to this city.

The airline operated its inaugural flight with the Boeing 737 Max aircraft, which comes with a design that provides flexibility, reliability and high efficiency, within the single-aisle aircraft, as it provides 10 flat seats in the “business” class, and 156 seats in the economy class, while the carrier’s commercial flights will be operated using The new generation 737 aircraft.

Fly Dubai's flights will start to Prince Abdul Majeed bin Abdulaziz Airport in Al-Ula, with two flights per week, on Wednesdays and Saturdays, starting from Terminal 2 at Dubai International Airport.

The inaugural flight took off from Terminal 2 at Dubai International Airport, carrying the CEO of "flydubai", Ghaith Al Ghaith, and an Emirati media delegation that included a number of chiefs and editorial directors of UAE newspapers, and landed at Prince Abdul Majeed bin Abdulaziz Airport in "Al-Ula". ', northwest of Saudi Arabia.

Al-Ghaith indicated that the launch of the trip comes at a time when the demand for travel is returning amid the lifting of travel restrictions around the world.

Al Ghaith stressed the importance of the Saudi market for the airline, and said: “The expansion of the (Fly Dubai) network in the Kingdom of Saudi Arabia, and the addition of (Al-Ula) as a sixth destination, would enhance the tourism and commercial flow between the UAE and Saudi Arabia.”

Al-Ula is one of the undiscovered wonders of the world, and it is the home of Al-Hajar, which is the first UNESCO World Heritage site in Saudi Arabia.

Al-Ula is located on the northwestern eastern side of the Kingdom of Saudi Arabia, and it is one of the cities belonging to Medina.

Known for its cultural and natural heritage and its trade.

It is a new destination in terms of tourism future in the Gulf region as a whole.

This site was opened to visitors for the first time in 2020, and tourists can now explore and view the rich historical and archaeological sites in this region, through a trip through an open museum of Nabatean tombs preserved in stone, sandstone hills, historical dwellings and antiquities, whether natural or man-made. Humans, which hold more than 200,000 years of largely unexplored history.

AlUla provides passengers with amazing options to search for a variety of cultural and historical experiences, in addition to outdoor adventure activities, especially in the mild winter.

And “flydubai” announced the resumption of its flights to the coastal city of Yanbu, to raise its destinations in the Kingdom to six destinations: Riyadh, Jeddah, Dammam and Madinah, in addition to “Al-Ula” and Yanbu, and flights began to Prince Abdul Mohsen bin Abdulaziz Airport in Yanbu as of February 24, with Three flights a week.

flydubai sees the Kingdom of Saudi Arabia as an important core market, as the two-way travel between Saudi Arabia and the UAE has increased significantly and very quickly.

It is noteworthy that Saudi Arabia inaugurated the "Al-Hijr" home in "Al-Ula" as the first UNESCO World Heritage site in the Kingdom, in front of visitors for the first time in 2020, to provide the opportunity for tourists to explore the unexplored and rich historical and archaeological sites in an open museum of Nabataean tombs preserved in Hegra and sandy hills. Natural monuments, and man-made ones that go back to prehistoric times.

• Expanding the "Fly Dubai" network in Saudi Arabia will enhance the tourism and commercial flow between the Emirates and the Kingdom.