The Director General of Dubai Chambers, Hamad Buamim, stated that Dubai's non-oil trade with Israel amounted to two billion dirhams during the first half of 2021, indicating that the chamber is looking forward to attracting leading Israeli companies and motivating them to list on the Dubai Financial Market. Buamim said, in his speech during Conference «Dubai - 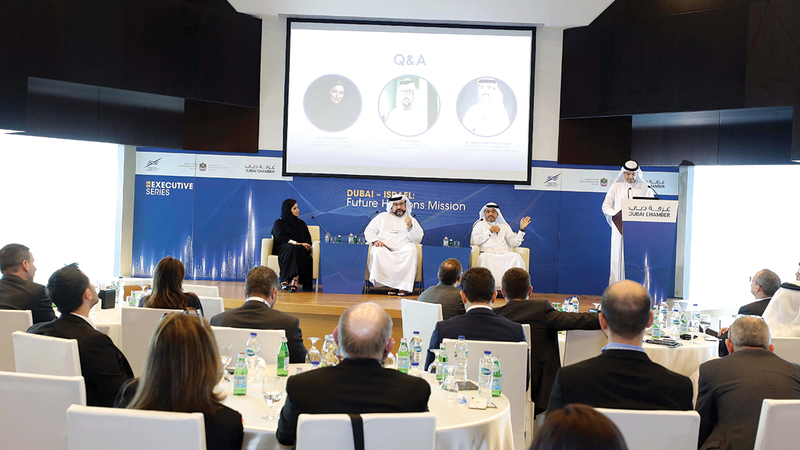 Buamim: 17 Israeli companies are members of the Dubai Chamber

The Director General of Dubai Chambers, Hamad Buamim, stated that Dubai's non-oil trade with Israel amounted to two billion dirhams during the first half of 2021, indicating that the Chamber is looking to attract leading Israeli companies and motivate them to list in the Dubai Financial Market.

In his speech during the conference "Dubai - Israel... Strengthening Economic Links", Buamim said that the number of Israeli companies that are members of the Dubai Chamber is about 17 companies so far, expecting that Israel will become one of Dubai's largest trading partners within five years.

In detail, the activities of the conference "Dubai - Israel... Strengthening Economic Ties" were launched in Dubai yesterday, which included the visit of a delegation of 50 representatives of more than 25 Israeli companies listed on the Tel Aviv Stock Exchange, to attend 200 bilateral meetings between investors from the two countries, which were organized by Dubai International Chamber, one of the three rooms operating under the umbrella of Dubai Chambers.

The visit of the trade mission, during the period from February 28 to March 3, is the result of cooperation between the Dubai International Chamber, the UAE Embassy in Israel, and the Tel Aviv Stock Exchange.

Dubai International Chamber said that it is leading efforts to provide services to global investors from visiting delegations during the current and post-Expo 2020 Dubai phase, as the Chamber focuses on supporting Dubai's foreign trade, attracting multinational companies, and helping companies expand in foreign markets. In addition to supporting and motivating multinational companies to list on the Dubai Financial Market.

The Director General of Dubai Chambers, Hamad Buamim, said during the opening speech of the conference that “Israeli companies have advanced expertise in vital and future fields such as technology, food security, information technology and financial services,” noting that the visit of the Israeli delegation comes at a time when Dubai is strengthening its openness to global markets. It looks forward to building a bright future for the next 50 years.

He stressed that "the Chamber is looking forward to attracting leading Israeli companies to participate in the mission and motivating them to list in the Dubai Financial Market," noting that "Dubai is an ideal destination for Israeli investments, and a global center in the world of business and finance."

Buamim added: "We focus on attracting multinational companies, especially in important future fields such as smart technologies and clean technology, attracting talent, and consolidating the emirate's competitiveness as a global business destination," stressing the Chamber's commitment to cooperating with various partners around the world for a better economic future.

He stated that Dubai's non-oil trade with Israel during the first half of 2021 amounted to two billion dirhams, which reflects the promising prospects for commercial cooperation between the two sides. business, and give them opportunities to hold bilateral meetings to discuss investment opportunities.

Buamim told "Emirates Today", "Israeli companies have a remarkable interest in cooperating and working in Dubai," noting that the delegation, most of which is visiting the UAE for the first time, includes 25 companies listed on the Tel Aviv Financial Market and worth about $70 billion. Pointing out that these companies have the necessary liquidity to start business, and that they have discussed signing agreements with local companies to provide their services in Dubai.

He added that the Tel Aviv Stock Exchange is the largest financial market in the Middle East, and they have an interest in expansion and listing in the Dubai Financial Market, which is one of the goals that the Dubai Chamber seeks within its interest in promoting investment and promoting international opportunities.

Buamim pointed out that the volume of non-oil trade with Israel reached about two billion dirhams within six months, which is a number greater than expectations, and that the number of Israeli companies established in Dubai also exceeds expectations, as the number of Israeli companies members in the Dubai Chamber reached about 17 So far, it is expected that Israel will become one of Dubai's largest trading partners within five years.

The UAE ambassador to Israel, Mohammed Mahmoud Al Khaja, said that "the business meeting will allow us to inform the world about what the Emiratis and Israelis can achieve through their joint efforts in the business sectors," calling for linking our financial institutions, offering facilities for transactions, capital flows, and building investments. and highlight the real potential of both markets cooperating together.