GDP per capita exceeded 80,000 yuan, surpassing the world average! These new breakthroughs in 2021 are worth remembering

Zhongxin Finance, February 28 (Reporter Li Jinlei) On February 28, the National Bureau of Statistics released the "2021 Statistical Bulletin of National Economic and Social Development".   Facing multiple challenges such as the complex international environment, the epidemic and extreme weather, the national economy has continued to recover, and the level of development has reached a new level. 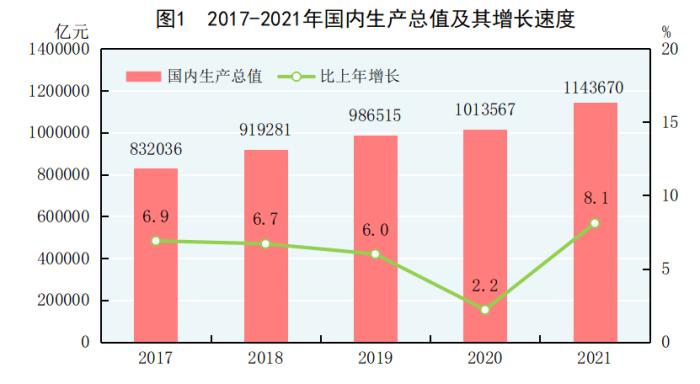 Facing multiple challenges such as the complex international environment, the epidemic and extreme weather, the national economy has continued to recover, and the level of development has reached a new level.

New breakthroughs have been made, witnessing the changes in China's economy and society.

In 2021, my country's gross domestic product (GDP) will increase by 8.1% over the previous year, with an average growth rate of 5.1% in the two years, ranking among the best in the world's major economies; the economic scale will exceed 110 trillion yuan, reaching 114.4 trillion yuan, ranking firmly in the world. Second largest economy.

In 2021, according to the annual average exchange rate, my country's total economic volume will reach 17.7 trillion US dollars, which is expected to account for more than 18% of the world economy and contribute about 25% to world economic growth.

The data shows that in 2021, my country's per capita GDP will reach 80,976 yuan, which is equivalent to 12,551 US dollars at the annual average exchange rate, exceeding the world's per capita GDP level.

The total labor productivity was 146,380 yuan per person, an increase of 8.7% over the previous year.

The negative list for foreign investment access has been continuously reduced, the level of investment facilitation has been improved, the complete industrial chain supply chain, broad market opportunities, and optimized business environment have made China a hot spot for attracting foreign investment.

In 2021, my country's actual use of foreign direct investment amounted to 1.1 trillion yuan, an increase of 14.9% over the previous year, and exceeded 1 trillion yuan for the first time.

Among them, the income of residents in poverty alleviation counties increased rapidly.

The annual birth population was 10.62 million

The number of people separated from households nationwide is 504 million, of which 385 million are floating population.

The national average monthly income of migrant workers is 4,432 yuan

The total number of migrant workers nationwide was 292.51 million, an increase of 2.4% over the previous year.

The average monthly income of migrant workers nationwide was 4,432 yuan, an increase of 8.8% over the previous year.

64.3% of cities meet air quality standards throughout the year

In 2021, the average number of days with good air quality in 339 cities at the prefecture level and above in the country will be 87.5%, an increase of 0.5 percentage points over the previous year; 64.3% of the cities have reached the air quality standard throughout the year; the annual average concentration of fine particulate matter (PM2.5) 30 micrograms per cubic meter, down 9.1% from the previous year.

The National Bureau of Statistics said that although the impact of the global epidemic is still ongoing, the international environment has become more complex, severe and uncertain, and domestic development is facing triple pressures of shrinking demand, supply shocks, and weakening expectations, the fundamentals of my country's long-term economic growth have not changed. The characteristics of economic development with good resilience, sufficient potential, and large space have not changed, the trend of stable economic recovery and transformation and upgrading has not changed, and the favorable conditions for building a new development pattern and promoting high-quality development have not changed.