China-Laos Railway "First Show" of Spring Festival Transport Sends Over 700,000 Passengers and Over 170,000 Tons of Cargo 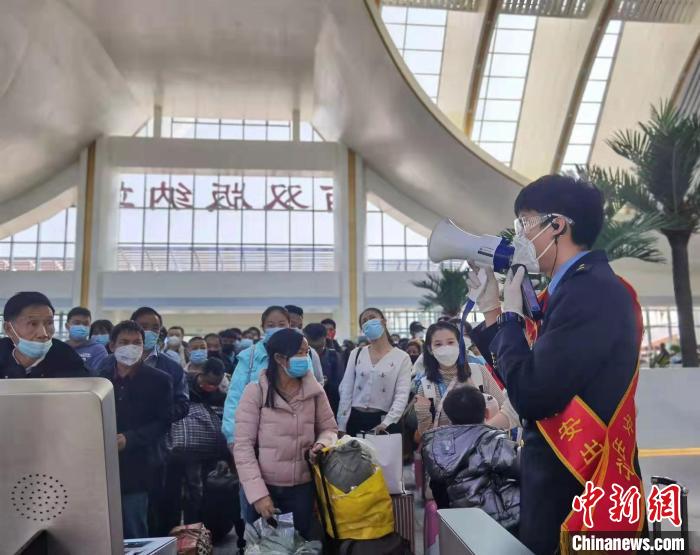 China News Service, Kunming, February 26 (Xie Yike) This year's Spring Festival (January 17 to February 25) has come to an end, and the newly opened China-Laos Railway has handed over the "first show" transcript of the Spring Festival: sending passengers over 700,000 passengers and over 170,000 tons of cargo.

Since the opening of the China-Laos Railway on December 3, 2021, it will take only 2.5 hours for the Chinese section from Kunming to Pu'er and just over 3 hours to reach Jinghong. The safe, green, efficient and convenient operating environment allows the China-Laos Railway to It has become the most popular means of transportation for people along the Spring Festival travel.

In order to meet the strong travel demand of passengers on the China-Laos railway line, during the Spring Festival travel period, China Railway Kunming Bureau Group Co., Ltd. operates an average of 25.5 pairs of passenger trains a day, with an average of 1 train every 30 minutes, realizing public transportation.

Especially after the end of the Spring Festival holiday, the China-Laos Railway has experienced a substantial increase in passenger flow. At its peak, the railway department operated 32.5 pairs of MMU trains every day, and the maximum number of passengers sent in a single day was 33,000.

The picture shows passengers queuing for trains at Xishuangbanna Station of the China-Laos Railway during the Spring Festival travel period.

"Intelligent anti-epidemic gates are used for entering the station, and technology is used to intelligently check the health code and body temperature of people entering the station. Greatly optimize the manual inspection, which leads to chaos and congestion at the entrance." Li Yunhong, head of the Pu'er Station of the China-Laos Railway, introduced.

At each station of the China-Laos Railway, the railway department arranges special personnel to guard the entry and exit gates. Passengers who cannot pass the personnel and cannot provide the health code will be re-examined and issued pass cards as required, so as to achieve safe and fast travel under the normalization of epidemic prevention and control. by car.

"The all-in-one scanning code and temperature measurement machine set up at the station can complete body temperature measurement, health code, and itinerary code verification in just 2 to 3 seconds, and it is very convenient to enter and exit the station." A tea businessman in Jinghong City, Xishuangbanna Dai Autonomous Prefecture, Yunnan Province Yang Fang buys tickets on her mobile phone and travels quickly.

According to reports, the 11 stations of the China section of the China-Laos Railway, except for the Mohan Port Station, all implement the inspection and inspection integration mode, simplifying the entry process and shortening the waiting time for passengers.

The picture shows a batch of goods transported by the China-Laos railway during the Spring Festival.

At the same time, each station also has a waiting area for soldiers, key passengers, a nursing room and other areas, and corresponding waiting services are provided respectively; the elevators and escalators used by the bus are equipped with corresponding signs, and personnel are arranged in key areas to guide the realization of a more comprehensive , Refinement services.

More than 10 provinces and cities including Shandong, Zhejiang, Chongqing, Jiangsu and Guangdong have successively opened international freight trains to cities such as Vientiane, Laos via the China-Laos Railway.

According to the relevant person in charge of the freight department of the China Railway Kunming Bureau Group, the railway department has given 17 preferential freight transportation projects to the stations along the China-Laos Railway, and the amount of preferential concessions has reached more than 2 million yuan, effectively reducing the logistics costs along the line.

From the rubber, fertilizer, and department stores in the early days of opening to electronics, photovoltaics, communications, automobiles, textiles, vegetables, flowers and other products, the categories of goods on the China-Laos railway are increasing.

At the same time, the railway department launched the "Lanmei Express" lineage products with the characteristics of fixed point, fixed line, timing, pricing and one-stop direct connection between Wangjiaying West Station, Yanhe Station and Vientiane South Station. It only takes 26 hours to travel from Kunming to Vientiane. Compared with the normal operating time of international freight trains, the operation time of the "Lancang-Mekong Express" has been greatly reduced.