A turbulent night! European stocks plummeted, US stocks rebounded, how will it be interpreted later? 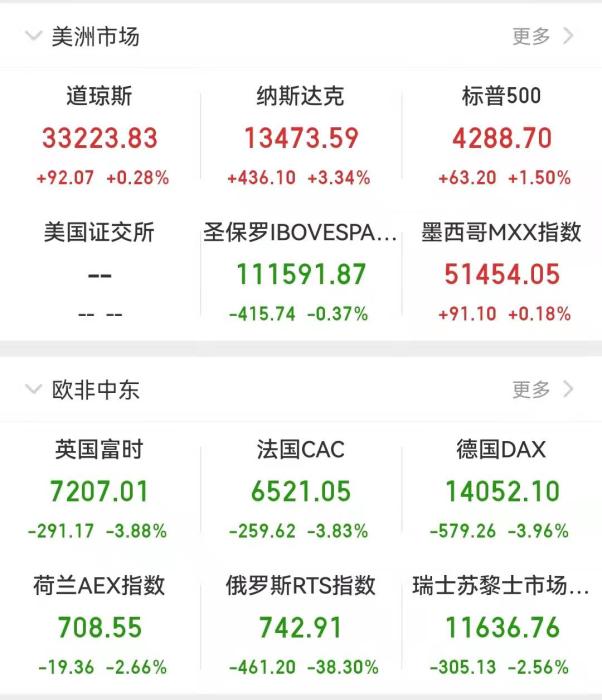 Affected by the Russian-Ukrainian war, on the 24th local time, the European stock market plummeted after the market opened. The Russian RTS index plummeted by nearly 50% during the session, the German DAX index and the French CAC index fell by more than 5% during the intraday, and the stock markets of other European countries also fell. fell.

As of the close, Russia's RTS index fell 38.3%, and the UK's FTSE index, France's CAC index and Germany's DAX index all fell more than 3%.

European and American stock markets closed on the 24th.

Perhaps affected by the speech of US President Biden, the three major stock indexes rose after that.

According to CNN reports, on the 24th local time, US President Biden announced four new sanctions against Russia, saying that all Russian assets in the United States will be frozen.

U.S. President Biden also tweeted that after a meeting with the leaders of the Group of Seven (G7) nations, they agreed to impose "devastating" sanctions on Russia.

Russia, as one of the important oil producers in the world, has seen a surge in crude oil futures prices amid the turmoil.

On the 24th local time, the price of the main US crude oil futures once stood at US$100/barrel; the April contract of Brent crude oil futures was once quoted at over US$105/barrel, hitting a new high since September 2014.

Crude oil futures were lower, however, after Biden said he would release more oil from the Strategic Petroleum Reserve (SPR) as needed.

The reduced risk appetite of international investors also led to an increase in the price of safe-haven assets, and the international gold price rose.

Spot gold has also skyrocketed, with London gold once breaking through $1,970 an ounce.

Russia and Ukraine are also the world's major grain exporters.

In addition, Ukraine's exports of corn and wheat accounted for 13.3% and 7.4% of global exports, respectively.

After the escalation of the conflict, on the 24th, the prices of agricultural products on the Chicago Board of Trade also soared.

Institutions: will suppress risk appetite in the short term

In terms of international oil prices and gold prices, He Ning believes that the sharp rise in gold prices before and after the outbreak of this conflict verifies the strong global risk aversion.

It is expected that if the situation escalates again, the price of gold will still rise in the short term, but it will be difficult to maintain the upward trend in the medium and long term; it is expected that the short-term conflict between Russia and Ukraine will push oil and gas prices to rise again.

However, after the conflict cools, oil prices are expected to return to stability.

On February 24, local time, the situation in Ukraine deteriorated sharply, and people in many places lined up in front of ATMs to withdraw cash.

The picture shows citizens withdrawing money from an ATM in Lviv, Ukraine.

CICC also pointed out that the outbreak of geopolitical conflicts will suppress risk appetite in the short term, leading to the benefit of safe-haven assets and the loss of risky assets.

Judging from the summarised historical experience, when a conflict occurs (usually within a week to a month), the global stock market will suffer some negative shocks and fall for a long or short period; safe-haven assets such as bonds, gold and the Japanese yen benefit relatively.

In CICC's view, Russia plays an important role in the global supply of some resource products (energy, natural gas and some agricultural products), so if this causes a "consequential loss" of the supply gap of some capital products, the impact of the latter may be far greater than that of the latter. Short-term shocks simply due to risk appetite.