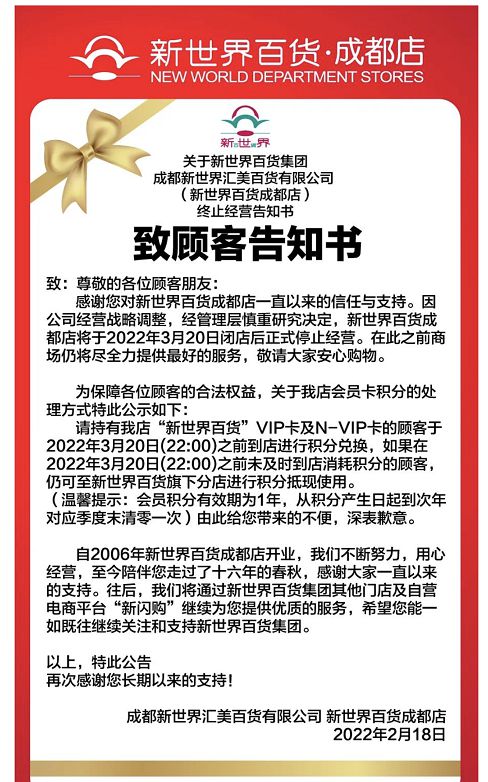 On the evening of February 17, the Chengdu store of New World Department Store (00825.HK) issued a notice of termination of operation on the WeChat public account. The department store will close the store and cease operations on March 20.

Since its opening in December 2006, the store has a 16-year history and is also one of the first Hong Kong-owned department stores to enter Chengdu. It is located in Central Plaza, No. 8, Shuncheng Street, Jinjiang District, Chengdu.

If customers fail to arrive at the store in time to consume the points, they can still use the points to redeem the points at the branches of NWDS.

The notice also stated that in the future, it will continue to provide customers with high-quality services through other stores of the New World Department Store Group and the self-operated e-commerce platform "New Flash Shopping".

From now on, the New World Department Store Chengdu store has also started a store closing and clearance activity.

During the peak period, there were nearly 40 large department stores in 17 cities in the mainland, including the department store named "New World" and the shopping center named "Paris Spring" in Shanghai.

However, in recent years, the performance has been sluggish and many stores have been closed one after another. At present, there are still more than 20 department stores and shopping centers in the mainland.

However, the K11 shopping mall, a high-end lifestyle brand under the New World Group, has continued to expand significantly in recent years. It is currently developing rapidly in Hong Kong, Shanghai, Guangzhou, Wuhan, Tianjin and other cities, and has even become a commercial benchmark in some cities.

New World Department Store’s 2022 financial year interim report performance forecast stated that as of December 31, 2021, it is expected to turn losses and the net profit attributable to shareholders of the listed company will be 40 million Hong Kong dollars.

In fiscal 2021, the operating income was HK$2.246 billion, and the net profit attributable to the parent company was a loss of HK$229 million.

Regarding the reasons for the loss in the last fiscal year, the company said that it was mainly due to changes in consumers' traditional shopping patterns and the impact of the new crown epidemic.

New World Group belongs to the Zheng Yutong family, one of Hong Kong's legendary rich and one of the four major families. Another huge industry of the Zheng family is the gold and jewelry king Chow Tai Fook (01929.HK), which has more than 5,200 jewelry retail stores.