Merchants: Price increases reduce the demand for sales of goldsmiths

Gold prices rose at the end of last week between 5.75 and 7.25 dirhams per gram, of various carats, compared to their prices at the end of the previous week, bringing the total increases of gold gram during the previous two weeks to 10.5 dirhams. 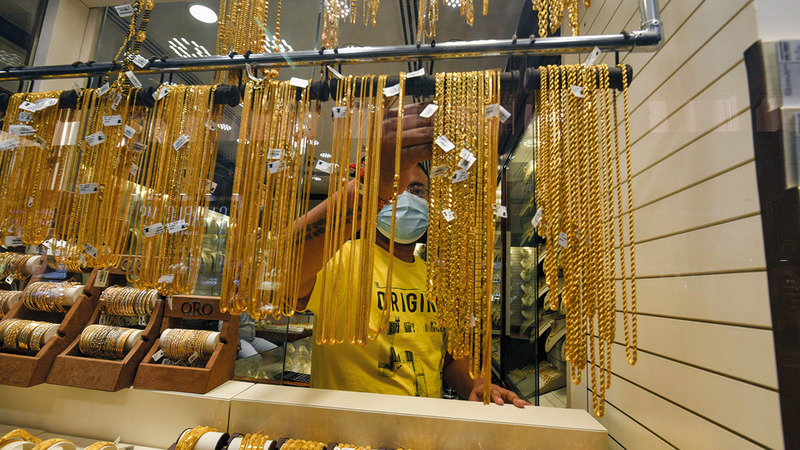 7 dirhams, an increase in the price of a gram within a week

Merchants: Price increases reduce the demand for sales of goldsmiths

Gold prices rose at the end of last week between 5.75 and 7.25 dirhams per gram, of various carats, compared to their prices at the end of the previous week, bringing the total gold gram increases during the previous two weeks to 10.5 dirhams.

Officials of outlets for gold and jewelry trade indicated to «Emirates Today» that the recent large increases in gold prices have limited the demand of dealers to buy gifts of gold jewelry, pointing out that some of the transactions that the markets witnessed, for small products from dealers residents, while Visitor sales fell, and stores saw limited transactions selling small bars.

In detail, the director of the "Baghdad Jewel of Gold and Jewelery Trade" shop said, "The great increases that gold prices recorded recently, contributed to a state of slow demand in the markets, for sales of gold works, as most dealers currently prefer to anticipate prices, and make decisions." Buying, if the yellow metal prices return to decline.”

He pointed out that "the sales outlets, on the other hand, witnessed some purchases of small gold bullion, which come for investment purposes."

In turn, the manager of the "Dahken Jewelery" store, Ashok Poet, said that "the recent price changes were clearly reflected in the decline in demand from visitors and tourists, while the markets were limited to some purchases of resident dealers."

He added that "dealers are in a state of anticipation of prices currently, whether for dealers who are waiting to sell used artifacts to take advantage of the price differences, or who tend to buy new artifacts as gifts."

For his part, the director of Al-Ayyam Jewelery Company, Galish Saqr, explained that “despite the boom in the market for handicraft sales on the occasion of Valentine’s Day or Valentine’s Day, a state of slowness is currently spreading among sales outlets due to the recent global price hikes. yellow metal".

He added, "Purchasing is currently limited to some small pieces of handicrafts, and others to small ingots, with a cautious turnout for dealers in that sector, in the hope that prices will rise at greater rates during the coming period."

• Stores that witnessed limited transactions for the sale of small gold bars.