The conflict in Ukraine is reshaping Europe's dependence on Russian gas

Europe relies on Russian natural gas to help heat millions of homes in winter and generate electricity for factories, as more than a third of Europe's natural gas comes from Russia. 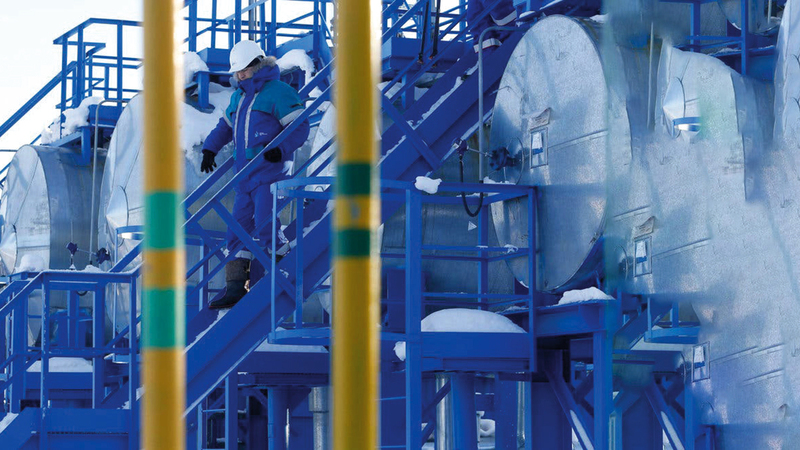 The conflict in Ukraine is reshaping Europe's dependence on Russian gas

The danger of the conflict in Ukraine is weighing on the gas markets.

Europe relies on Russian natural gas to help heat millions of homes in winter and generate electricity for factories. More than a third of Europe's natural gas comes from Russia.

But with Russia massing its forces along the Ukrainian border, the European continent's heavy dependence on Russia limits its diplomatic options and threatens to throw its energy supplies into turmoil.

And any disruption to gas supplies could lead to shocks to the continent, indicating that the conflict in Ukraine is reshaping Europe's dependence on Russian gas.

If the flow of gas stops, either as collateral damage from the war or as a negotiating tactic by Russian President Vladimir Putin, experts worry that already high prices in an ever-changing global market could rise dramatically.

Some companies may have to close temporarily.

And if the gas supply cuts continue, European families who are already facing higher utility bills this winter could be affected.

Some analysts and energy industry executives are skeptical about whether President Putin will cut off gas from Europe, in part because of how important gas exports are to Russia's economy, but the tensions come at a pivotal time for many European countries that have turned to natural gas, to help them meet their needs. Its conversion from fossil fuels to wind, solar, and other clean sources.

In addition, diplomatic proposals to confront the Russian military build-up, focusing on sanctions that could limit energy trade, could in turn jeopardize billions of investments and oil and gas contracts, especially for countries such as Germany and Italy, which depend on Russian gas more than others.

According to European data, 38% of the natural gas used by the EU in 2021 came from Russia.

Some countries, such as Poland and Lithuania, have gradually reduced their dependence on Russian gas, but for others, the dependence is increasing significantly.

The situation in Germany

Germany, which is at the center of the diplomatic standoff, is the most important importer of Russian gas. The bulk of the gas flows into Germany directly from Russia through a large pipeline in the Baltic Sea, known as the Nord Stream.

A second pipeline, called Nord Stream 2 at a cost of $11 billion, was finally completed.

Although Russian gas has not yet flowed through Nord Stream 2, members of the US Congress have called in recent months to prevent its opening, warning that the new pipeline could allow Moscow to exert greater influence on the continent and starve Ukraine through the loss of transit fees. It is obtained through the existing network of pipelines, which are very important to the economy of Kiev.

Earlier, US President Joe Biden said that Nord Stream 2 would not go ahead if Russia invaded Ukraine.

Although many large pipelines bring Russian gas to Europe, where it flows through a vast interconnected network, the amount of gas transiting Ukraine remains an important route for it, and has declined sharply over the past decade. Other channels are the Yamal pipeline through Poland, The TurkStream pipeline, which feeds Turkey, also brings gas to southern Europe.

If the gas stops flowing, importing countries will need to find other sources, as this is likely to be offset by bringing in more LNG from sources around the world.

LNG is produced by cooling the gas to about minus 260 degrees Fahrenheit, so that it can be converted into a liquid form and more easily loaded on ships, and here the big advantage is that it can be transported steadily from long distances, including from Australia or the United States. United States, providing viable alternatives to local or regional sources.

In recent months, Europe has seen a kind of simulation of a Russian gas cut, with Moscow reducing shipments to Europe in what some analysts and politicians say is an attempt to keep prices high.

According to the International Energy Agency, Russia reduced its gas pipeline exports to Europe by 23 percent during the last quarter of 2021, compared to the same period the previous year.

At the same time, imports of liquefied gas rose.