China-Singapore Jingwei, February 16 (Xiong Jiali) This morning (16th), the National Bureau of Statistics will announce the consumer price index (CPI) for January 2022. The average forecast of many institutions shows that the CPI in January rose by 1.1% year-on-year.   In December 2021, the CPI increased by 1.5% year-on-year, down 0.8 percentage points from the previous month, and down 0.3% fro 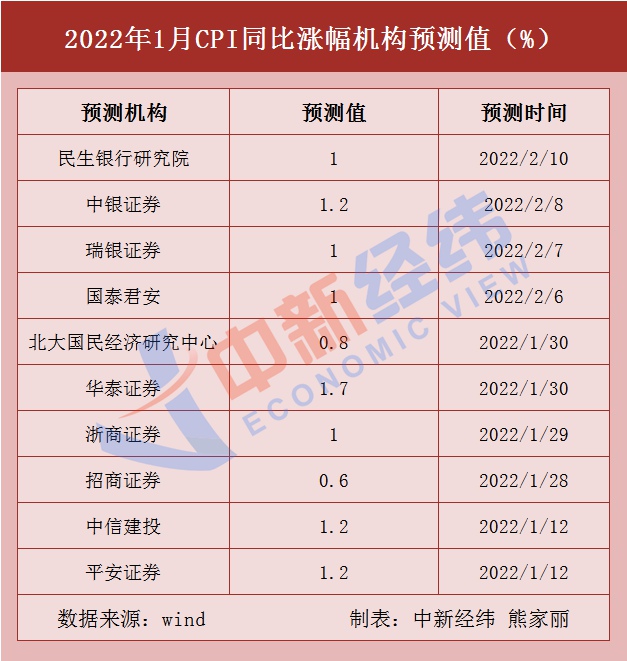 The average forecast of many institutions shows that the CPI in January rose by 1.1% year-on-year.

Essence Securities said that taking into account the major changes in food and oil prices, the CPI in January may fall further to around 0.9% year-on-year.

On the whole, the month-on-month CPI in January is expected to rise to around 0.4%, but it is significantly lower than the previous month's month-on-month. In January, the year-on-year CPI may further decline from 1.5% to 0.9%.

The research report of the National Economic Research Center of Peking University pointed out that due to the measures to protect people's livelihood in various places, the accelerated release of live pigs before the Spring Festival, the relative decline in consumer demand and the rebound in supply, and the upgrading of prevention and control measures in some areas, the impact of insufficient demand recovery in the service industry has led to the impact of food prices. And non-food prices showed an upward trend month-on-month.

According to the monitoring of the Ministry of Commerce, from January 3 to January 23, 2022, the wholesale price of pork fell for three consecutive weeks.

Huatai Securities predicts that the CPI will hover at a low level in the short term and the PPI will continue to decline.

Huatai Securities analyzed that the CPI may hover at a low level of less than 2% in the short term. On the one hand, pig prices have entered a short-term correction period, suppressing food inflation; inflation.

It is also necessary to pay attention to the year-on-year disturbance of the CPI from January to February due to the wrong period of the Spring Festival.

Looking forward to 2022, China Chengxin International believes that the overall CPI may rise moderately in 2022, but the upside is limited.

China Chengxin International said that in 2022, with the marginal recovery of investment and consumption, the price of related service industries will rebound, and the drag of pork prices on the upward CPI will gradually ease. The CPI may show a slight upward trend throughout the year. Mid-year or year-round highs.

As upstream raw material prices gradually return to normal levels, and the local spread of the epidemic drags down the pace of demand-side repair, CPI lacks a substantial upward basis, and it is difficult to see a sharp rise, and it is unlikely that it will break "3" throughout the year.