China's economy begins to "tiger" |   Zhongxin Finance, February 16 (Reporter Li Jinlei) The year of the tiger is beginning, and excavators are very busy.   At the beginning of the Chinese New Year, a large number of major projects in many places across the country have been started. The machines on the construction site are roaring, and the excavators are flying up and down. Data map: Aerial p 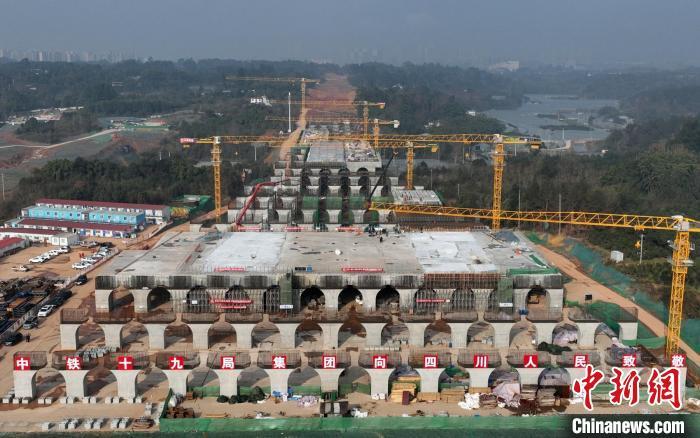 Zhongxin Finance, February 16 (Reporter Li Jinlei) The year of the tiger is beginning, and excavators are very busy.

At the beginning of the Chinese New Year, a large number of major projects in many places across the country have been started. The machines on the construction site are roaring, and the excavators are flying up and down.

Data map: Aerial photography of the construction site of Tianfu Station under construction.

Facing the triple pressure of demand contraction, supply shock, and weakening expectations, China's economy in 2022 will emphasize stability and progress while maintaining stability.

To withstand the downward pressure, expanding effective investment is crucial.

At present, all localities and departments are working hard, and pressing the "accelerator button" to start construction in the Year of the Tiger.

Zhongxin Finance noticed that just after the Spring Festival, Shaanxi, Fujian, Hubei and other places held a centralized start-up ceremony for key projects, and many projects started to speed up construction.

Among them, on February 7, the first working day after the Spring Festival holiday, Shaanxi held the province's high-quality project promotion meeting and the concentrated start of key projects in the first quarter of 2022. 963 provincial and municipal key projects with a total investment of 447 billion yuan were concentrated. start.

On the same day, Fujian Province held a video linking ceremony for major projects in the first quarter, involving a total of 230 projects with a total investment of 239.8 billion yuan.

On the 8th, Hubei held a centralized start-up activity for major projects in the province in the first quarter of 2022. In the first quarter, the province started to focus on 1,913 projects with a total investment of 1.4 trillion yuan, involving industrial development, infrastructure, people's livelihood improvement and other fields.

In addition, Hebei Xiong'an New Area started 43 projects in the first quarter, with a total investment of 60.1 billion yuan.

469 projects in Shijiazhuang have been started, with a total investment of 100.17 billion yuan.

Shenyang signed the first batch of projects in 2022, with a total investment of 379.5 billion in 432 projects.

The start of the year will start, and all localities have also worked hard to achieve a good start in the first quarter.

At present, the 2022 government work reports of 31 provinces have been released, and "small goals" have been set for investment.

In the government work report, Sichuan clarified the goal of "an increase of 8% in fixed asset investment in the whole society" in 2022, and also proposed to pay close attention to 700 provincial key projects, especially 100 provincial key promotion projects, and increase the "two new and one heavy" projects. Construction efforts will be made to speed up the construction of new infrastructure such as gigabit optical networks, integrated big data centers, and charging and swapping stations.

Accelerate the construction of new infrastructure and add 40,000 5G base stations.

Wen Bin, chief researcher of Minsheng Bank, told the China-News Financial Reporter that investment plays a key role in stabilizing growth, especially expanding effective investment, which will help achieve the goal of stabilizing growth in the short term, and help optimize the economic structure in the medium and long term. Provide the premise and foundation for future economic development.

Wen Bin pointed out that all localities are now speeding up the resumption of work and production, increasing the "two new and one heavy" construction, and manufacturing investment is also recovering, which will play a key role in preventing the risk of stalling the economy in the first quarter of this year and ensuring that it operates within a reasonable range.

Since the beginning of the year, the monetary policy has been pushed forward, and more new loans have flowed to the real economy.

According to data from the central bank, the increase in social financing in January 2022 will be 6.17 trillion yuan, 984.2 billion yuan more than the same period last year.

Among them, RMB loans issued to the real economy increased by 4.2 trillion yuan, the highest in a single month, with a year-on-year increase of 380.6 billion yuan.

The efficiency of fiscal policy has been improved, and the issuance of new special bonds has accelerated significantly, helping local infrastructure capital needs.

"Monetary policy and fiscal policy are ahead to support stable growth." Wen Bin believes that from the perspective of financial data, corporate financing conditions have improved and demand has rebounded.

In the next stage, to stabilize growth, we must continue to expand domestic demand and stabilize external demand.

Strengthen the coordination and cooperation of fiscal policy and monetary policy, reverse market expectations as soon as possible, boost confidence, and ensure that the economy operates within a reasonable range.