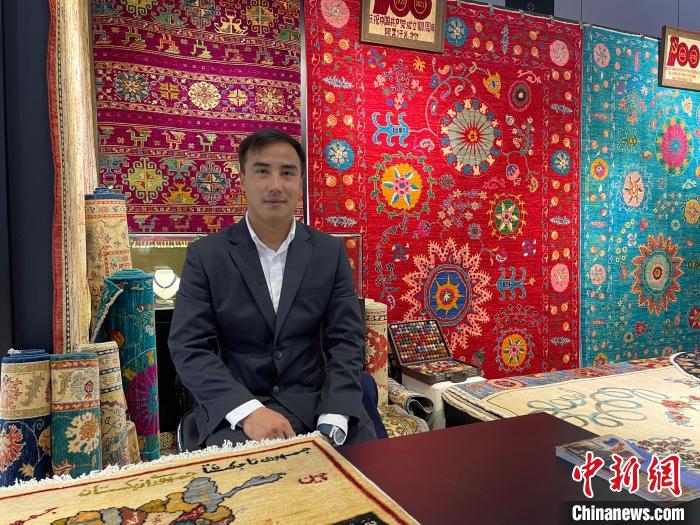 (Walking to the grassroots level in the Spring Festival) Afghan businessman Ali: Feeling a different kind of reunion in the prosperous Chinese New Year

During the Spring Festival, the Shanghai Nanjing Road Greenland International Import Expo Market is full of flavors of last year, and merchants from all over the world have launched new "Chinese New Year limited" products.

Among the many imported good items, handmade wool rugs from Afghanistan are particularly eye-catching.

Ali, an Afghan businessman, told Chinanews.com that these carpets are handmade from natural wool, real wool and other materials. They are called "artwork on the floor" by the locals, and they have also become popular among Chinese consumers in recent years.

In response to the Spring Festival, Ali has launched a special Afghan New Year gift box, which contains Afghan pine nuts, Afghan gem bracelets, Afghan jade cups and other products full of Afghan characteristics. "In fact, I would like to take this opportunity to tell you that Afghanistan is not only a carpet and pine nuts, but also a Pistachios, almonds, lapis lazuli, and many other high-quality products.”

Because the company's employees have all gone home for the Chinese New Year, during the Spring Festival, Ali alone handled the business at the CIIE.

Contrary to Ali's expectations, business at the China International Import Expo was extremely hot during the festival, which also made Ali determined to launch more Afghan products that combine Chinese New Year elements in next year's Spring Festival.

During the Spring Festival, Ali's customers have also changed from tourists and couples in the past to family-based customers. "You can often see lively children and their grandparents choosing New Year gifts in the store, which is very warm." At the same time, there are also many red elements on the street that symbolize festivity.

From these small changes, Ali also felt a different atmosphere of the Spring Festival reunion.

"I think the Spring Festival is a particularly good festival. It allows everyone to put down their work and reunite with their relatives and friends." Ali told reporters that he and his Chinese friends celebrated a traditional Chinese New Year in Shanghai this year. Dumplings at the New Year's Eve dinner left a deep impression on him.

Ali said he especially enjoys spending time with his friends.

It is worth mentioning that this year is also the first time for Ali to celebrate the New Year in Shanghai. He has been living in Beijing for the first 7 years of coming to China.

The connection between Alibaba and Shanghai originated from the China International Import Expo.

After participating in the third CIIE, Ali was surprised to find that orders from Shanghai, Beijing, Liaoning and other provinces and cities came one after another.

In the six months after the CIIE was held, Ali received a large number of orders for handmade carpets. These orders were distributed to more than 1,500 local Afghan families, which also solved the urgent needs of these more than 1,500 families.

With the idea of ​​bringing more Afghan brands and products into China, Ali decided to put his business in Shanghai.

In August 2021, Ali opened China's first Afghanistan collection hall at the Greenland Global Commodity Trading Port across the street from the exhibition site.

At the 4th China International Import Expo, he also won a 20-square-meter booth in the Greenland Quality Consumer Pavilion to promote Afghanistan handmade carpets, handmade leather bags and other products.

Ali said that during the years of war, the domestic economy of Afghanistan has been hit hard. Many hand-woven carpets made by handicraftsmen are often difficult because of sanctions or damaged sales channels. A large number of local farmers also encounter difficulties in their livelihoods. Therefore, Afghans attach great importance to the Chinese market. .

In the new year, Ali expects that more Afghan goods can enter China, so that more Chinese people can understand Afghanistan's rich and diverse products and culture, "I want more people to know that Afghanistan is not on TV news. What it looks like, it has its many facets and a splendid cultural treasure." (End)