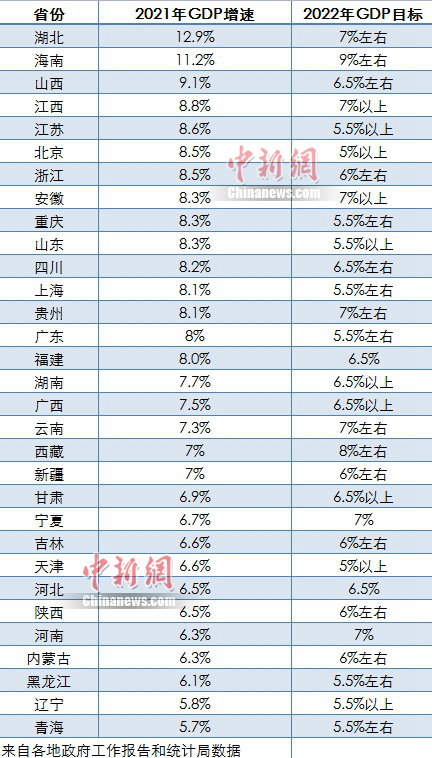 China's economy begins to "tiger" | 31 provinces' GDP targets for 2022 have been announced, and 9 provinces have growth targets of ≥7%

Among them, 9 provinces have economic growth targets of 7% and above.

Wen Bin, chief researcher of Minsheng Bank, told China-News Financial reporter that each province has set targets for economic growth in 2022, although the targets in many places have been lowered compared to last year.

But basically it is generally above 5.5%, with an average of around 6%.

A reporter from China-News Finance and Economics noted that nine provinces have GDP growth targets of 7% and above in 2022.

Among them, Hainan has set a target of about 9%, Tibet is about 8%, Jiangxi and Anhui are more than 7%, Hubei, Guizhou and Yunnan are about 7%, and Ningxia and Henan are 7%.

The high-spirited Hainan has set the highest GDP growth target.

Sitting on the dividends of the construction of the free trade port, Hainan's main economic indicators in 2021 will historically be at the forefront of the country, with a growth rate of 11.2% ranking second in the country and the average growth rate for two years ranking first.

At present, the Chinese economy is facing the triple pressure of demand contraction, supply shock, and weakening expectations. Therefore, in 2022, the emphasis is on stability.

The high target of 7% is set because Henan intends to overcome the impact of the floods and achieve an economic rebound.

Henan also pointed out in the government work report that this goal is "helpful to guide expectations, boost confidence, and gather strength. It is positive and promising, and it also requires hard work to complete."

Affected by the epidemic, the two sessions in Tianjin have been postponed until after the Spring Festival. Therefore, Tianjin has also become the last province to announce its economic growth target for 2022.

In the government work report, Tianjin proposed that the economic growth target for 2022 should be above 5%.

Among the 31 provinces, autonomous regions and municipalities, Tianjin and Beijing both set their GDP growth targets at more than 5%, the most low-key.

The relevant person in charge of the Beijing Municipal Development and Reform Commission explained that setting the economic growth target at more than 5% takes into account the needs and possibilities, and connects with the potential growth rate, and also leaves room for epidemic prevention and control, structural adjustment and dealing with uncertainties in economic operation. , which is conducive to guiding expectations, boosting confidence, and guiding all parties to focus on improving the quality and efficiency of development.

Many provinces say they are striving for better results

From the perspective of the top three economic provinces of Guangdong, Jiangsu and Shandong, the growth rates in 2021 are 8%, 8.6% and 8.3%, but these three provinces have all anchored the growth target of 5.5%.

Among them, Guangdong is set at about 5.5%, and Jiangsu and Shandong are both set at more than 5.5%.

Luo Zhiheng, chief economist of Yuekai Securities and dean of the research institute, believes that the average growth rates of these three provinces in 2020-2021 are 5.1%, 6.1%, and 5.9%, respectively, which shows that the target setting is relatively cautious and leaves some room for it. .

Although specific targets have been set, Hubei, Shanxi, Fujian and other provinces have stated that they will strive for better results.

Hubei has set a growth target of about 7% in 2022, and said that it will strive for better results in actual work.

Under the circumstance of soaring coal demand and prices, Shanxi, which is "flying with coal", will see a GDP growth rate of 9.1% in 2021, ranking third in the country.

In 2022, Shanxi's GDP target is about 6.5%. Shanxi said that it will strive for better results in actual work.

The goal has been set, hundreds of players are competing for success, and all regions are striving to move forward. China's economy will strive to make a good start in 2022.