The tension in Ukraine sinks the European stock markets and gives the Ibex 35 a fall of 3.18%

When it seemed that nothing could unsettle the markets more than the increase in omicron infections and the withdrawal of stimuli, rate hikes and central banks... 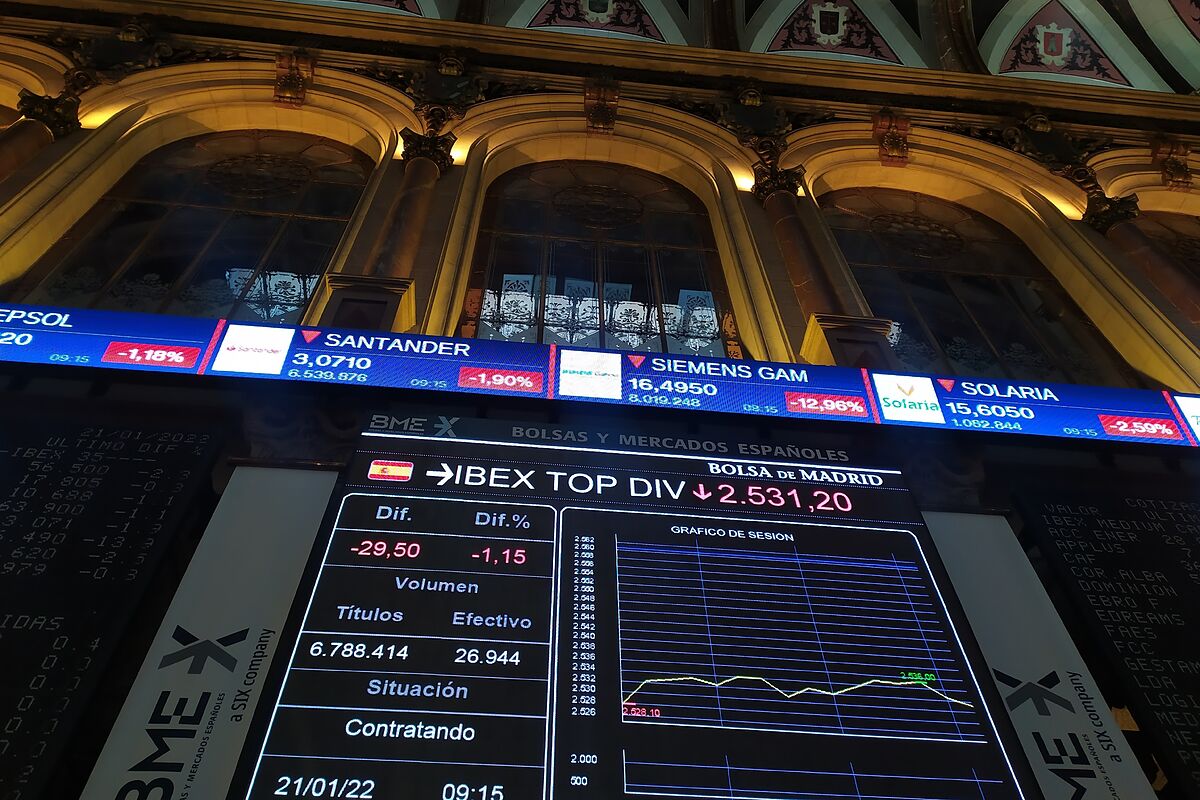 , the rate hikes and the central banks -with the US Federal Reserve in the lead-, the escalation of tension in Ukraine has surprised investors again and taken over their fears, causing severe falls in the main European stock markets and a wave of massive sales that have also reached cryptocurrencies

, with the exception of

The shock in Eastern Europe is also behind the general collapse in the main European stock markets, with the

, but the falls worsened with the opening of Wall Street, where its main indices are going through their seventh consecutive day in negative with attention focused on Ukraine and on the meeting that the Fed will hold this Tuesday and Wednesday. With this panorama, the

The confrontation between Russia and Ukraine in Eastern Europe has introduced a new risk factor for markets that were already facing major challenges in 2022. Analysts agree, however, that the clash between the NATO countries and Moscow has prevailed over any uncertainty that has existed up to now and has

positioned itself as the main concern

, also from an economic point of view. Much more considering that no one dares to predict what will happen in the coming days.

"I don't think the markets can assess what can happen in these kinds of events. The result is just binary at a very simplistic level (Russia invades or not), but even that raises the question of what the markets should respond to." says

of the investment fund manager AXA IM. "Of course, safe assets would do very well, equities would sink due to risks to economic growth, and the dollar would soar against the euro because a war in Ukraine would be a very immediate practical problem for Europe (refugees, higher natural gas prices, the need for a united response from EU nations.) But things would get complicated very quickly in terms of the response from the West, how brutal the conflict would become, if Belarus entered in the contest and what financial and economic sanctions or actions would be taken by both sides," he adds.

they contemplate three possible scenarios, as things stand at this point. A

which would imply "pacification through diplomacy. Rebound in the stock markets, although its strength would be conditioned by what the Fed says on Wednesday";

a "bad" scenario , which would involve a "

, from the east and south, but without isolating the three Baltic republics from Poland through an invasion from Belarus to connect Kaliningrad with the rest of Russia. Depending on the extent of the damage and the timing that it takes time for the situation to stabilize (i.e., end of military action), so brief or prolonged will be the stock market crashes"; and

, which would imply all of the above and, in addition, the isolation of the 3 Baltic republics.

"This is the least likely scenario and the only one that would force us to make a resounding change in our investment strategy," they point out.

In the event that the "bad scenario" takes place, the entity's Analysis department considers that the stock markets, "and especially technology", would suffer until the situation stabilizes.

“The Fed would probably postpone any tightening (

slower, rate hikes later, and no allusion to its balance sheet), as would the BoE (no longer raising rates on Feb 3, as now discounted).”

But stock markets are not the only ones suffering from investor doubts. Also the cryptocurrencies, with bitcoin in the lead, try to fit in the last sessions the doubts and fears of the investors.

The clearest sign is found in bitcoin itself, which has plummeted more than 6% on the day, although at the close of the European markets it had lowered the decline to 2.5%, which places it at around $34,400. "From a technical point of view, lost $40,000, prices point to go looking for $30,000. That area is key in the future development of prices.

trigger the closing of leveraged trades in mass and would lead us to find the 24,000", explains

, spokesman in Spain for the multi-asset investment platform

The falls also coincide with a time when Russia, the third largest cryptocurrency mining country globally, has proposed to ban the use and creation of cryptocurrencies.

The collapse is even greater in the case of