China News Service, Shanghai, January 21 (Li Huiyun and Xu Jing) Our daily work and life are surrounded by various screens: mobile phones, computers, tablets, TVs, watches... How to realize real 3D stereoscopic display? On the 21st, Shanghai University of Science and Technology announced that the team of Academician Gu Min of the Institute of Photonic Chips of the school, the team of Professor Q 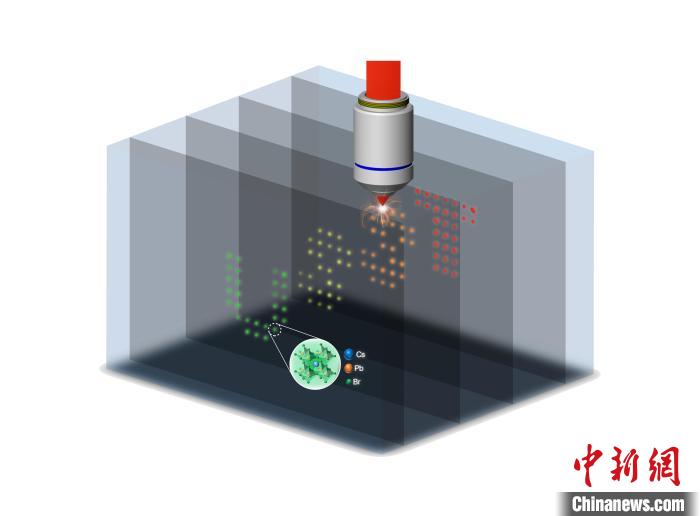 On the 21st, Shanghai University of Science and Technology announced that the team of Academician Gu Min of the Institute of Photonic Chips of the school, the team of Professor Qiu Jianrong of Zhejiang University and the team of Dr. Tan Dezhi of Zhijiang Laboratory have made a major breakthrough in the holographic display of nanomaterials. The internal realization of a three-dimensional (3D) semiconductor quantum structure with a controllable band gap has opened the "door" of a new type of stereoscopic color display.

On January 21, Beijing time, the relevant research results were published in the top international journal "Science". This is also the first time that a teacher from the University of Shanghai for Science and Technology has published a paper in the main issue of "Science" as the (co) first author.

Mobile phones, computers, tablets, TVs, watches, etc. belong to two-dimensional screens. Even the naked-eye 3D, which has quietly emerged in recent years, only uses people's binocular parallax to "deceive" the optic nerve, so that the brain thinks that it is seeing a 3D image.

Moreover, naked-eye 3D has stricter requirements on the distance, orientation and angle of the audience, and problems are prone to occur when the number of audiences is large.

From the images floating in the air in "Star Wars" to Teresa Teng's "chorus" "Big Fish" with singer Zhou Shen across time and space at the 2022 New Year's Eve concert, the concept of stereoscopic display is well known to more and more people.

Holographic technology provides an implementation method for complete three-dimensional information reproduction, and is considered by the industry to be the most promising technical means to achieve stereoscopic display.

However, holographic technology must pass through a certain medium and project the image onto it in order to appear.

"At present, most of the display photosensitive arrays are distributed in a plane. The three-dimensional images in sci-fi films depend more on the visual effects of human beings, which belong to 'imitation three-dimensional'. The real three-dimensional display is still a major challenge." Shanghai Polytechnic Photonics Associate Professor Fang Xinyuan of the Institute of Chip Research said.

To be the first person to "eat crabs" with nano-3D stereoscopic screens, the first thing to solve is to make the screen transparent, so that vivid and three-dimensional images can be presented from all angles.

The team from the Institute of Photonic Chips of the University of Shanghai for Science and Technology cooperated with the team from Zhejiang University to apply holographic display in a colorless and transparent composite material with a three-dimensional controllable distribution of perovskite nanocrystals induced by femtosecond lasers to light up three-dimensionally distributed quantum dots , for the first time to achieve dynamic stereoscopic color holographic display.

Compared with the current flat-panel display, the new stereoscopic color display has higher resolution and information capacity, and also expands a larger imagination space for the future "screen revolution".

"It is nano-scale pixel control with very high precision and a resolution much higher than the current two-dimensional screen. Although there is still a long way to go for industrialization, it has at least opened a new door, I think This is also the significance of our scientific research." Fang Xinyuan said.

The research results were published in the main issue of "Science" under the title "Three-dimensional direct lithography of stable perovskite nanocrystals in glass". The co-first author of the paper is a Ph.D. Born Sun Ke, Zhijiang Laboratory PI Tan Dezhi, and Associate Professor Fang Xinyuan of Shanghai University of Science and Technology.

"Many top scientific research achievements are actually inseparable from this kind of interdisciplinary, cross-school and even cross-border cooperation and exchanges," said Academician Gu Min, "Our Shanghai Science and Technology team is deeply involved in the field of holography, while the Zhejiang University team is engaged in optical materials, femtosecond laser and There is a deep accumulation in the interaction of materials, and the cooperation results once again prove the importance of this scientific research method in realizing the '0 to 1' breakthrough."

In fact, since the invention of holographic technology by Dennis Gable, in addition to being used in the field of display technology, holography has had an important impact in the fields of storage, encryption, imaging, and optical computing.

Academician Gu Min said: "This achievement can be said to use 3D holography technology to light up the future of stereoscopic color display. In the future, we hope to focus on the cross application of holography technology and artificial intelligence to meet the major national strategic needs and achieve more significant impact. The achievements of scientific research.” (End)