How to light up the world under the oriental lantern epidemic? ——Sichuan Zigong Lanterns Going to the Sea 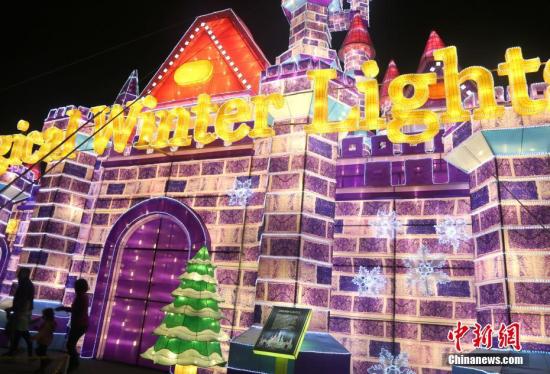 (New Year News) How to light up the world under the epidemic of Oriental lanterns?

China News Agency, Zigong, Sichuan, January 18th: How to light up the world under the epidemic of Oriental lanterns?

The Spring Festival of the Year of the Tiger is approaching, and I have not yet approached the Chinese Lantern World in Zigong, Sichuan.

Thousands of miles away, in Blagnac, France, 40 sets of lanterns also created by Zigong lanterns light up the Rituret Park.

Zigong lanterns started in the Tang and Song Dynasties.

Since the first time abroad in 1990 to hold the "China Zigong Lantern Festival" in Singapore, Zigong lanterns have been exhibited in 80 countries and regions around the world.

Despite the impact of the new crown pneumonia epidemic, Zigong lanterns are still facing difficulties, "lighting on all sides" at home and abroad, and will be exhibited in the United States, Singapore, France, the United Kingdom and other countries in 2021 alone.

"Colored lanterns are delicate work, difficult to design, difficult to assemble, difficult to maintain, and even more difficult to go to sea under the epidemic." In the factory of Zigong Lantern Color Group, Huang Mingshuzheng, a lantern craftsman with more than 30 years of experience in the industry, and his apprentices counted festivals related to the Year of the Tiger light group.

Huang Mingshu recalled that the Spring Festival of 2020 coincided with the early stage of the outbreak. Many lamp craftsmen maintained lamp exhibitions overseas. Colleagues in the United States could only return to China through Ethiopia. Colleagues who were in charge of the exhibition task of “Perceiving China, the World’s Lanterns” in Chile were even more consuming. It took half a year to return home safely.

Beside Huang Mingshu stood more than ten large packages two meters high and covered with shock-proof cotton. These are the lantern sets that will be sent to the American music town of Branson after the Spring Festival.

"Zigong lanterns are all hand-made. We will prepare all parts of the lanterns when they are exhibited abroad, and then assemble them locally. However, considering the inconvenience of transportation and rising costs after the epidemic, our technical team will make the lanterns portable and miniaturized. Huang Ming stated that the innovation of going overseas after the epidemic is also reflected in personnel exchanges. Before, he would go to two or three countries to assemble lanterns every year, but last year, he only went to France, and the lantern exhibitions in other countries were conducted through Internet video. Professional team.

Zigong lanterns have become famous overseas, in addition to the whimsical ideas of lantern craftsmen who make porcelain into dragons, silkworm cocoons make phoenixes, medicine bottles become unicorns, and CD-ROMs turn koi, they also use modern light and shadow, laser imaging, and 5G applications to keep pace with the times.

Huang Mingshu's son, Huang Yuanchao, went to France together last year to participate in the production of the French aircraft "Fengshen" light group.

The light group is 30 meters long and 6 meters high, costing tens of thousands of bulbs and taking 85 days to complete.

At present, the Zigong lantern industry employs about 40,000 people all year round, and even more than 130,000 people in peak seasons.

In order to weave a splendid world of light and shadow better, and to strengthen the exchange between the East and the West using lights as a medium, Zigong also established China's first Chinese Lantern Academy in Sichuan University of Light Chemical Industry.

According to Chen Jiaming, executive dean of the China Lantern Academy, the college is currently trying to use the lantern exhibition as an application scenario with the School of Computer Science, the School of Automation and Information Engineering, the School of Materials, and the Academy of Fine Arts.

By the end of 2021, 15 containers of Zigong lanterns will be shipped to Singapore through the "Rong-Europe +" ASEAN rail-sea combined transport class.