How long can pre-made dishes remain popular in the market?

How long can pre-made dishes stand on the tuyere? Compared with the popularity of the capital market, consumers have mixed opinions on pre-made dishes Text/Biao Yangcheng Evening News reporter Ding Ling   In the past two years, prefabricated dishes have been on the rise. Under the background of the rise of the lazy economy, the epidemic of staying at home and the call for local New Year, the pr 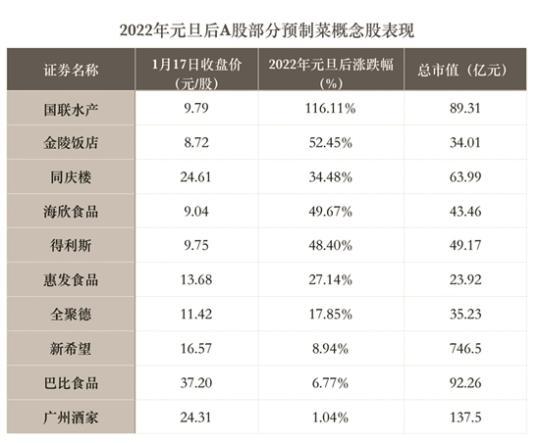 How long can pre-made dishes stand on the tuyere?

Compared with the popularity of the capital market, consumers have mixed opinions on pre-made dishes

In the past two years, prefabricated dishes have been on the rise.

Under the background of the rise of the lazy economy, the epidemic of staying at home and the call for local New Year, the pre-made dishes that "rescue" consumers from a series of tedious steps such as washing vegetables, choosing vegetables, cutting vegetables and ingredients are gradually becoming popular. Not only Entering the daily three meals of consumers, it also occupies a place in the New Year's Eve dinner.

Pre-prepared vegetable companies land in A-shares one after another

It is nothing new that pre-made dishes have become the new favorite of young people.

As early as last year's Spring Festival, young people who "celebrated the New Year on the spot" "scrambled" a handful of pre-made dishes.

According to the data, the sales volume of pre-made vegetables for Chinese New Year on Tmall platform increased by 16 times compared with the previous year.

Under the influence of the epidemic, the "lazy economy" has become popular.

For many young people who pay more and more attention to the concept of health, eating out costs too much time and money, and takeaways always feel unsafe, hygienic and reliable, and it is quite troublesome to cook, buy and prepare food by themselves.

Capital has a keen sense of smell.

In April last year, Weizhixiang, the "first stock of pre-made dishes", landed on the A-share market, and its market value has now reached 9.3 billion yuan; It was listed with an issue price of 15.71 yuan, but within a week, the stock pulled 7 daily limit, and the stock price rose all the way to 40.07 yuan; in November last year, the aquatic product prefabricated vegetable company Xianmeilai also submitted a prospectus, seeking to be in the A-share market. listed.

Most companies do not account for much of their revenue

The Spring Festival is here again, and the potential of the prefabricated vegetable market has once again attracted attention.

On January 11, Guolian Aquatic Products and Hema Xiansheng signed a cooperation agreement. The two parties stated that they would cooperate in the development and marketing of aquatic prefabricated dishes.

On the evening of January 11, Delis said that it is expected that the company's revenue from pre-made vegetables will reach about 1.2 billion yuan this year, which is three times the revenue of 400 million yuan last year.

From January 12, the prefabricated vegetable sector of A shares has been completely ignited, setting off a daily limit.

A number of A-share prepared vegetable concept stocks have risen by more than 30%, far exceeding the performance of the broader market in the same period.

Among them, Guolian Aquatic has the most outstanding performance.

Since New Year's Day, the company's stock has continued to rise as a whole, and the stock price has nearly doubled in 9 trading days. It has gained 3 "20 cm" daily limit in the last three trading days of last week. As of the close on January 17, Guolian Aquatic Products closed at 9.79 yuan. .

In addition, a number of related concept stocks such as Delis, Jinling Hotel, and Haixin Foods also performed well.

However, from the perspective of related concept stocks, although many listed companies have also set foot in the prefabricated food track in recent years, most of the revenue is not high.

Tongqinglou also recently released an announcement on abnormal fluctuations in stock trading, saying that Anhui Tongqinglou Food Co., Ltd., a wholly-owned subsidiary of the company, is involved in the pre-prepared vegetable business, which is the company's key development business segment. At present, this business is still in its infancy. , as of September 30, 2021, the operating income of this business accounted for less than 1% of the company's operating income.

Compared with the popularity of the capital market, consumers have mixed opinions on pre-made dishes.

But there are also consumers who complain that "pre-made dishes are really neither tasty nor nutritious, and some are even tasteless."

In this regard, Zhu Danpeng, a senior researcher at the China Brand Research Institute and a food industry analyst, believes that this reflects that China's pre-made dishes have not really entered the "prosperous production and sales" node.

In response to some consumers who think that pre-made dishes are "not nutritious" and "not good in taste", and even worry about their food safety, Zhu Danpeng said that this shows that consumers do not have a deep enough understanding of pre-made dishes.

To solve this problem, it is necessary not only for the industrial side to carry out more innovation and upgrading and product iteration, but also for the capital side to help the entire industry develop in a healthy, conscientious and orderly direction.

iiMedia Research analysts believe that pre-made dishes are just in their infancy in China, and young and middle-aged people will be the main consumers of pre-made dishes in the future.

With the upgrading of consumption and the layout of cold chain logistics, the prefabricated vegetable market will accelerate its development to the BC side at the same time.