Beijing Railway Bureau: 18.72 million passengers are expected to be sent during the Spring Festival in 2022

Zhongxin Finance, January 17 (Reporter Zhang Ni) At 5:34 a.m. on the 17th, with the G6737 train slowly starting from Beijing West Railway Station, it marked the official start of the 40-day Beijing Bureau Group Corporation's 2022 Railway Spring Festival. Kick off. During the Spring Festival travel this year, Beijing Bureau Group Co. is expected to send 18.72 million passengers, of which 8.986 mi 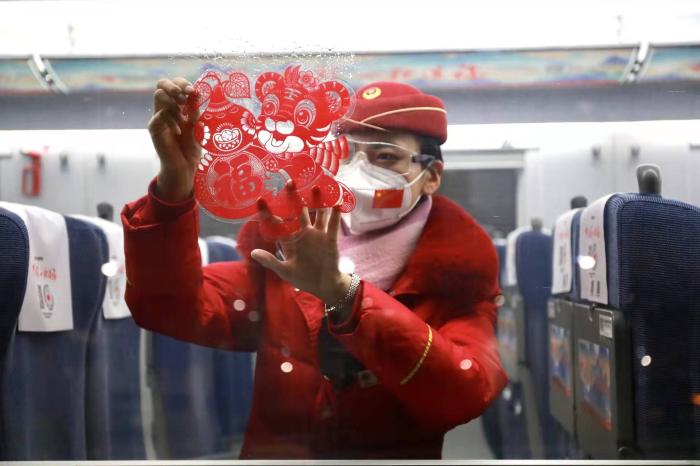 During the Spring Festival travel this year, Beijing Bureau Group Co. is expected to send 18.72 million passengers, of which 8.986 million are expected to be sent to Beijing.

On the 17th, the 2022 Railway Spring Festival officially kicked off.

The 2022 Spring Festival runs from January 17th to February 25th.

On the basis of ensuring the capacity of 800 pairs of trains starting and ending on a daily basis, the Beijing Railway Bureau has recruited 3,510 people from 51 units and departments. On-duty transportation security tasks for driving passenger trains.

In addition, during the Spring Festival travel period, according to the actual situation of passenger flow, 154.5 additional pairs of passenger trains are planned to be opened by adopting the tiered arrangement and precise delivery mode.

In order to ensure the transportation service for the Beijing Winter Olympics during the Spring Festival travel period, the Beijing-Zhangjiakou high-speed railway will implement the Winter Olympics semicolon operation map, and Qinghe, Yanqing, Taizicheng and Chongli Stations will be listed as the Winter Olympics service guarantee stations, and the stations and trains will strictly implement the Winter Olympics. According to the relevant requirements of the Organizing Committee, implement "closed-loop" and "non-closed-loop" management, and organize transportation according to the requirements of epidemic prevention and control, and take necessary measures such as circuit breaker mechanisms in high-risk areas of sudden outbreaks.

On the 17th, the 40-day railway spring festival officially kicked off.

During the Spring Festival travel this year, the Beijing Railway Bureau has introduced a number of measures to facilitate the people and benefit the people in a series of services such as continuous improvement of station and train service quality, innovative ticket sales, and refunds and changes.

In terms of ticket purchase, the time for ticket sales, refund and change services, and receipt of reimbursement vouchers will be extended.

Stations at or above the prefecture-level have set up special ticket windows for ticket refunds and ticket changes.

Make preparations for the implementation of the electronic temporary passenger ID certificate, open the ticket window and provide consulting services.

In addition, each station has opened a caring service window to provide ticket purchase guarantee services for elderly passengers and people who are disconnected from the Internet; online reporting of student group tickets has been launched to centrally handle Spring Festival tickets for students. Currently, the needs of 985,000 students have been met.