Price hikes and the absence of catalysts reduce gold sales

Officials of outlets selling gold and jewelry trade said that the markets recently witnessed a relative calm and a slowdown in the demand for gold jewelry, compared to the previous two weeks, due to the rise in the price of gold and the absence of stimulating occasions for purchase. 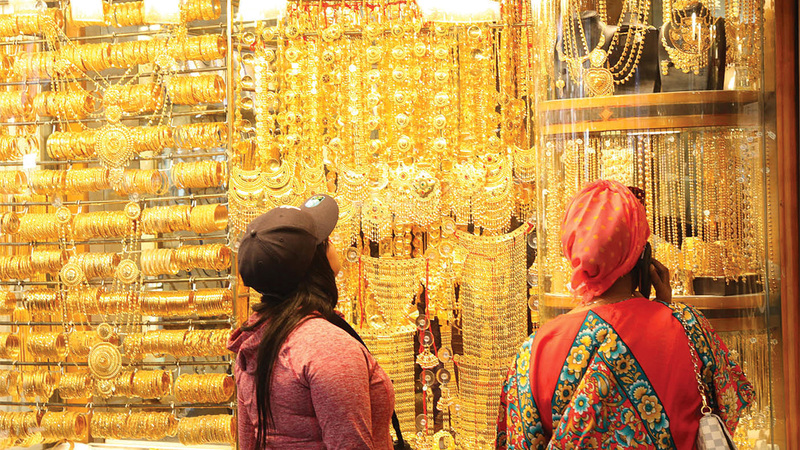 Demand is concentrated on small pieces

Price hikes and the absence of catalysts reduce gold sales

Gold recorded heights ranging between 2 and 2.5 dirhams per gram.

Officials of outlets selling gold and jewelry trade said that the markets have recently witnessed a relative calm, and a slowdown in the demand for gold jewelry, compared to the previous two weeks, due to the rise in the price of gold and the absence of occasions to stimulate purchase.

They explained to "Emirates Today" that most of the sales were concentrated in gold pieces of small weights, especially 18-carat.

Yesterday, gold prices in the Dubai and Sharjah markets recorded increases, whose value ranged between two and 2.5 dirhams per gram of various calibers, compared to their prices at the end of the previous week.

The director of sales at "Anan Jewelry Store", Abdulaziz Al-Khatib, said that the markets are currently witnessing a state of relative calm, and the slow demand for purchase compared to the previous two weeks, as purchases were limited to small gifts and tourist groups.

He stressed that the lack of motivating occasions to buy at the present time, and dealers anticipating significant price drops, contributed to the decline in the demand for purchase, especially since most of them have already bought gifts during the festive season, which may take some time for the markets to return to the state of popularity.

For his part, the director of sales at the "Al-Sarraf Jewelry Store", Muhammad Ali Al-Tohamy, agreed that the recent price increases for gold, and the absence of purchase incentives such as holidays and events, contributed to the relative calm and slowness of sales of goldsmiths, pointing out that the slow state included works, bullion and gold coins. Both.

He explained that the gifts of crafts made of small-weight pieces took up the largest shares of the sales, and were concentrated in 18-carat artifacts, which is preferred by different nationalities because it is the most diverse in shapes, designs and workmanship.

In the same context, the director of "Machoom Jewelery Store", Raj Bahi, said that the end of the festive season has influential repercussions on the movement of demand for gold jewelry, pointing to a state of slowness and calm in the absence of incentives for seasons and occasions, or even price drops that encourage dealers to buy. .

He added that the movement was limited to some sales of tourist groups, and pieces of small weights, expecting the markets to return to a state of recovery in the coming weeks, with expectations of a decline in prices.