Accelerate the formation of green and low-carbon transportation methods 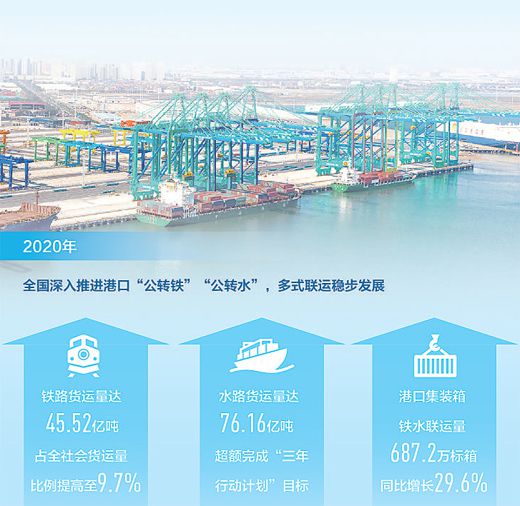 Transportation emissions account for about 10% of my country's total carbon emissions.

The "Carbon Peaking Action Plan before 2030" issued by the State Council proposes to accelerate the formation of green and low-carbon transportation methods.

Transportation emissions account for about 10% of my country's total carbon emissions.

The "Carbon Peaking Action Plan before 2030" issued by the State Council proposes to accelerate the formation of green and low-carbon transportation methods.

Improving the basic conditions of green transportation, optimizing the transportation structure, promoting the application of new energy and clean energy transportation equipment, and advocating green travel... In recent years, the transportation industry has achieved positive results in energy conservation and emission reduction, making a strong contribution to reducing the intensity of carbon emissions.

The basic conditions of green transportation are getting better and better

The Guilin-Yangshuo section of the G65 Baomao Expressway is like a long dragon, strung together with the beautiful scenery of the southern country along the way.

"At the beginning of 2020, the road major repair project in Guiyang section was completed. Not only did the old pavement have a new look, but the construction process was also very green." Wang Wei, deputy manager of the Engineering Technology Department of China Merchants Highway Guilin Company, calculated an account for the reporter: resurfacing with the traditional Compared with the plan, the road overhaul saves 110,000 tons of asphalt mixture, saves energy consumption of 6,300 tons of standard coal, and reduces carbon dioxide emissions by 13,000 tons.

The relevant person in charge of the Highway Bureau of the Ministry of Transport introduced that in the past few years, various regions have actively carried out research on key technologies for recycling waste asphalt pavement and diversified and efficient utilization technologies.

Under the vigorous guidance of the Ministry of Transport, in the construction of highway projects in many places, comprehensive consideration has been given to the selection of line locations, plans for borrowing and spoiling soil, drainage protection, selection of bridge and tunnel structures, interconnection layout, and setting of service facilities. utilize resource.

Not only highway construction, my country has made a lot of positive progress in the construction of green transportation infrastructure in recent years——

In recent years, urban public transport, taxis and freight distribution have become important areas for the application of new energy vehicles in my country, with more than 1.2 million vehicles being used. New energy vehicles account for more than 66% of urban buses. The application of liquefied natural gas (LNG) in the water transportation industry is also In the active promotion, the number of LNG filling stations for inland ships has reached 20.

Promote the construction of green waterways.

Promote the use of shore power for ships in port.

By the end of 2020, there are about 7,500 berths with shore power supply capacity in ports and water service areas across the country, of which more than 4,700 shore power berths have been built in the Yangtze River Economic Belt.

According to preliminary calculations, in 2020, the cumulative saving of vehicle fuel will be about 187,100 tons, and the hydrocarbon emissions will be reduced by about 1,482.16 tons.

The transportation structure is continuously optimized and adjusted

"In the past, there were often long queues of large trucks at the port terminal. In recent years, we have continued to promote the 'revolution of railways' and 'distribution to collection' of bulk commodities, which not only makes the port collection and distribution more orderly, but also greatly reduces vehicle exhaust emissions. ” said Zhang Wenjun, deputy general manager of the business department of Tianjin Port Co., Ltd.

In recent years, my country's ports have achieved remarkable results in "transiting iron" and "transiting water".

By the end of 2020, the coal collection ports of 17 major coastal ports such as the Bohai Rim and the Yangtze River Delta have all been replaced by railway and water transportation; the proportion of ore dredging in major coastal ports using railways, water transportation and belt conveyors has reached 61.3%, compared with 2017. an annual increase of nearly 20 percent.

The proportion of railway freight volume has continued to increase.

In 2020, the national railway freight volume will be 4.552 billion tons, accounting for 9.7% of the total social freight volume from 7.7% in 2017, and the volume of bulk cargo transportation undertaken by railways has increased significantly.

The volume of waterway freight is growing rapidly.

In recent years, my country has accelerated the improvement of the inland waterway network, and the volume of bulk cargo transported by waterways has continued to increase.

In 2020, the freight volume by waterway reached 7.616 billion tons, exceeding the goals set forth in the "Three-Year Action Plan".

In 2020, the national ports completed the container rail-water combined transport volume of 6.872 million TEUs, a year-on-year increase of 29.6%.

Freight is cleaner and passenger traffic is greener.

At present, the national bus operating lines are 1.48 million kilometers long, and the dedicated bus lanes exceed 16,000 kilometers. The service guarantee capability has been significantly improved.

The passenger volume of rail transit in six cities including Beijing and Shanghai accounts for more than 50% of the public transportation.

"The Ministry of Transport will take carbon reduction as the starting point, formulate relevant documents on the green and low-carbon transformation of transportation as soon as possible, and form a green and low-carbon transportation mode." The relevant person in charge of the Comprehensive Planning Department of the Ministry of Transport said that the next step will mainly focus on the following aspects. :

Speed ​​up the electrification process of urban public transport, rental, logistics distribution, and postal express delivery vehicles, and the proportion of new energy vehicles in public areas such as public areas in national ecological civilization pilot zones and key air pollution prevention and control areas shall not be less than or equal to 80%.

Accelerate the application of new and clean energy for coastal and inland ships.

Promoting the use of electric, hybrid and clean energy for new ships.

Promote the application of green and low-carbon highway maintenance technologies and materials.

Accelerate the progress of the construction of the railway project in the collection and distribution ports in an all-round way, and accelerate the use of green transportation methods such as railways, waterways, closed belt corridors, new energy and clean energy vehicles for bulk cargo in coastal and inland river ports.

Improve the green transportation standard system, and continue to publish the promotion catalogue of key energy-saving and low-carbon technologies in the transportation industry.

Deeply participate in global greenhouse gas emission reduction in the field of transportation, and strengthen international exchanges and cooperation in green transportation.

Graphics for this edition: Wang Zheping