China Singapore Finance, January 6 (Reporter Li Jinlei) Since the New Year, the keyword RCEP has been very popular.   RCEP is the "Regional Comprehensive Economic Partnership Agreement", which came into effect in 10 countries including China on January 1, representing the birth of the world's largest free trade zone.   What are the characteristics and advantages of RCEP? What benefits can it b 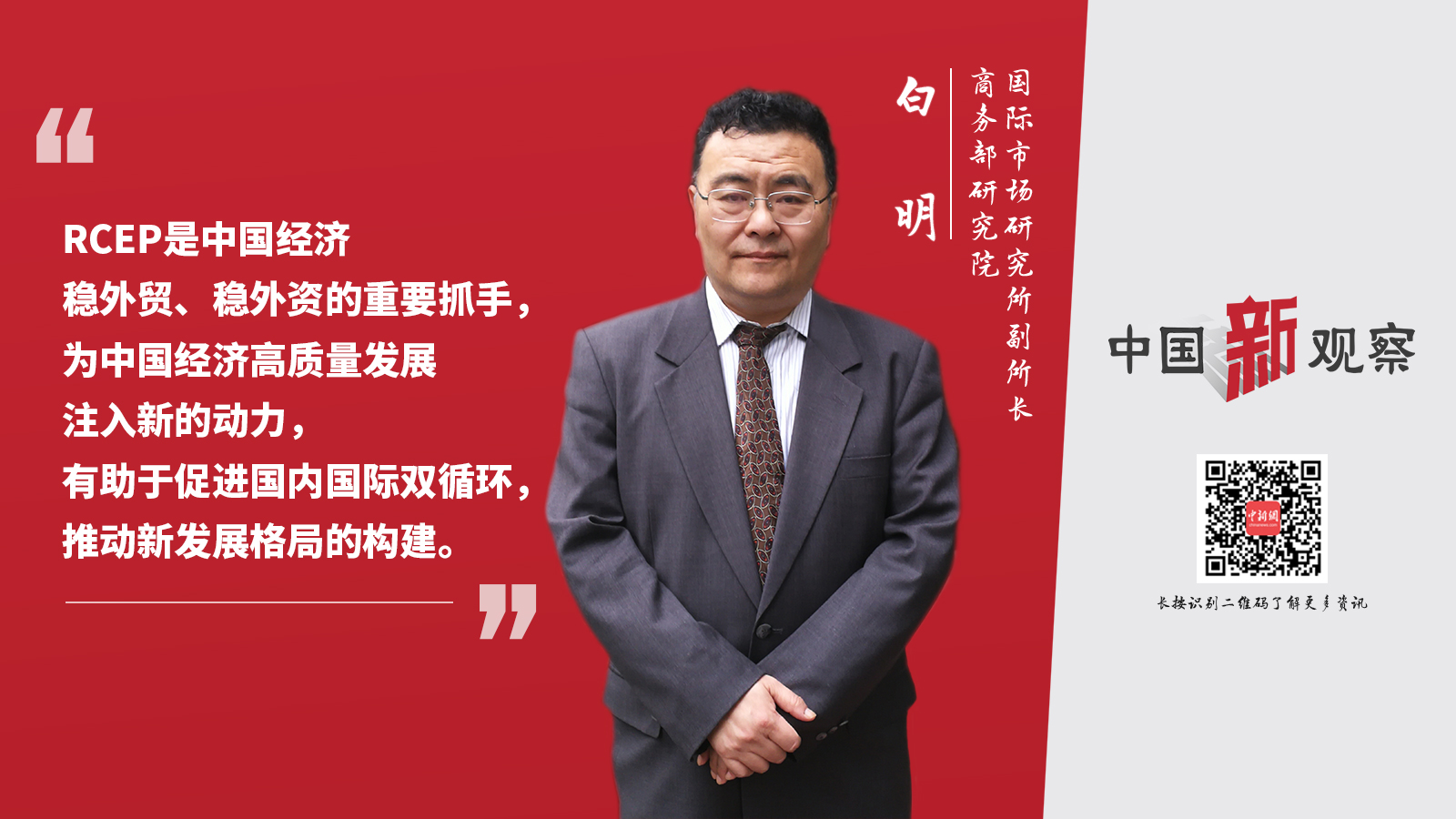 RCEP is the "Regional Comprehensive Economic Partnership Agreement", which came into effect in 10 countries including China on January 1, representing the birth of the world's largest free trade zone.

What are the characteristics and advantages of RCEP?

What benefits can it bring to ordinary people and enterprises?

Under the pressure of anti-globalization, what impact will RCEP have on the Chinese economy and the world economy?

Regarding these focal issues, Bai Ming, deputy director of the International Market Research Institute of the Ministry of Commerce, accepted an exclusive interview with the "China New Observation" column of Chinanews.com, and interpreted.

Excerpts from the interview are as follows:

China News Service: The free trade zone with the largest population, the largest scale of economy and trade, and the most potential for development in the world has officially landed. What are the characteristics and advantages of RCEP?

The characteristics and advantages of RCEP are the

In terms of scale and influence, it is the world's largest free trade zone.

RCEP has 15 member countries (currently 10 countries have taken effect), including China, Japan, South Korea, Australia, New Zealand and 10 ASEAN countries. From the perspective of GDP, population, and total trade, they all account for about 30 of the global total. %.

The second is strong tolerance

RCEP is established in the most economically active place in the world, and China's inclusion makes RCEP more valuable.

In terms of tariff preferences, after the agreement takes effect, more than 90% of the goods trade in the region will gradually achieve zero tariffs, with a relatively high degree of openness.

China News Service: What tangible benefits can RCEP bring to ordinary people in my country?

First, it is cheaper to buy

, zero tariffs will reduce the cost of imported goods, merchants have more room for profit, and consumers will be cheaper and more affordable to buy foreign products.

For example, China's imports of coconut juice, pineapple products, and paper products from ASEAN, induction cookers, electric ovens, and most mechanical equipment, instruments, and auto parts imported from Japan will gradually be exempt from tariffs.

Second, there are more buying options

, more high-quality foreign products will enter the Chinese market, and consumers have a wider range of choices and can shop around.

Third, it is more convenient to buy

The indirect benefit is reflected in the fact that RCEP will further improve China's foreign trade industry chain and supply chain, and drive the development of more foreign trade enterprises, which will create more employment opportunities, more job opportunities, and help increase the income of the people.

The picture shows the first RCEP certificate of origin in Beijing issued by the customs officer of Zhongguancun Customs, affiliated to Beijing Customs.

As a bridge and link that connects domestic and international double cycles, RCEP will also benefit Chinese companies. It is mainly reflected in three aspects.

One is a broader market, the other is a more stable industrial chain, and the third is a better business. Business environment.

First, products of more companies can enter other countries with zero tariffs, thereby gaining more market space and expanding the scope of resource allocation. More Chinese companies can better go out and invest.

At the same time, import costs are reduced and management freedom is also enhanced.

Finally, after the RCEP takes effect, the business environment will be more perfect, the level of trade facilitation will be further improved, the support and services that enterprises will enjoy will be better, and the operating and transaction costs will be further reduced.

For example, copyrights, patents, trademarks, and designs that a company has applied for in a member state can also be protected in other RCEP countries.

Qingdao Customs issues the RCEP certificate of origin after the RCEP is officially effective.

China News Service: How should companies seize the opportunities brought by RCEP?

What to pay attention to?

Such opportunities are the same for companies in other member states. Therefore, for Chinese companies, there are both opportunities and challenges. Companies must clarify their position in international trade and have a clear understanding of their position. At the same time, benchmarking with trading partners or competitors, maximizing strengths and avoiding weaknesses, continuously improve product quality and enhance market competitiveness.

The certificate of origin, known as "paper gold", is a prerequisite for ensuring that companies are eligible for zero tariffs.

In particular, enterprises should make good use of the RCEP region of origin accumulation rules, which means that the materials of other member states used in the production process of RCEP member countries’ enterprises can be regarded as local materials of origin, which can accumulate and increase the value of origin. The proportion of ingredients makes it easier for member countries to reach the threshold for enjoying tariff preferences.

The Ministry of Commerce once cited an example. For example, a Chinese company produces refrigerators and exports them to ASEAN countries, and uses Korean compressors and other parts in the production, which exceeds 60% of the price of the whole machine. If the China-ASEAN Free Trade Agreement applies, because Failure to meet the required regional value component of more than 40% of the origin standard, exports to ASEAN cannot enjoy preferential tariffs.

However, under RCEP, Korean compressors can be regarded as the cumulative value of regionally produced materials, and refrigerators assembled in China that use Korean compressors are exported to ASEAN and can enjoy preferential tariffs.

Therefore, enterprises must thoroughly understand and make good use of the preferential policies and facilitation rules in the agreement to fully tap business opportunities.

China News Service: As a new benchmark for multilateral economic and trade cooperation and opening up, how will RCEP inject new impetus into China's opening up?

What is the important role for China's economic development

Compared with China's existing free trade agreements, RCEP has obvious advantages in both the degree of openness and the open areas.

The entry into force of RCEP will promote China to achieve a higher level of institutional openness, and better participate in the development of regional industrial chain supply chain integration and the construction of an integrated large market. It represents that China's opening to the outside world is opening and the circle of friends is increasing.

This will greatly promote the development of trade, will further stabilize China's basic foreign trade and foreign investment, promote the upgrading of industrial quality, and stimulate market vitality.

RCEP is an important tool for stabilizing foreign trade and foreign investment in China's economy. It injects new impetus into the high-quality development of China's economy, helps China unblock the regional industrial chain and supply chain, promotes the domestic and international dual cycle, and promotes the construction of a new development pattern. .

Reporter from Chinanews.com: Globalization is currently facing a counter-current, and protectionism and unilateralism are on the rise. What significance does the implementation of RCEP have for economic globalization and world economic development?

Under the resistance of anti-globalization, the implementation of RCEP to hedge against the counter-current of globalization and make countries more confident in the face of trade protectionism is an important achievement of multilateralism and free trade.

The Asia-Pacific region is the most active place in the world economy. Through a series of RCEP institutional arrangements, the threshold for international cooperation is lowered, the division of labor is more reasonable, and the cake can be bigger or better.

The UNCTAD research report shows that by 2025, RCEP will bring more than 10% to the export growth of 15 member countries.

RCEP can not only add impetus to the development of the world economy, but also give the world confidence that the international industrial chain and supply chain will not easily collapse under external shocks. The foundation for development and cooperation between related countries will become better and better, and it will be closer and more convenient. Cooperate more freely, thereby enhancing the resilience and stability of the international industrial supply chain.

The establishment of RCEP is also a model for other countries. It will not only benefit all member states, but also benefit the world economy and inject more stable expectations into the uncertain world economy.