2022 to the future together丨people from many countries praise China's economy 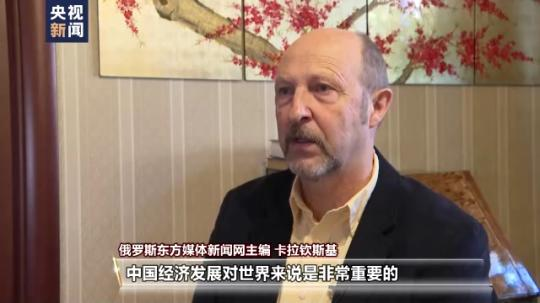 The World Bank recently released a briefing focusing on China's high-quality development, and it is expected that China's economy will grow by 8.0% in 2021.

People from many countries believe that China's high-quality development will also better benefit the people of all countries.

Karaczynski, editor-in-chief of Russian Oriental Media News: China’s economic development is very important to the world, and China occupies an important position in the manufacturing sector, including the production of high-tech products.

The recovery of China's economy has contributed significantly to boosting international trade and logistics, and driving the recovery of other countries' economies.

Lihan Faiz, head of international trade affairs of the Gulf Cooperation Council for Arab States: There is no doubt that China has made great achievements in economic development this year, and it has also provided new ideas for the development of countries in the world.

Regardless of the GCC as a whole or from the perspective of individual member states, the economic and trade cooperation with China in the past year, especially cooperation within the framework of the "Belt and Road", has achieved great development.

The international community continues to be optimistic about China's economic development.

A number of overseas investment institutions have stepped up their efforts to deploy the Chinese market.

The United Nations Conference on Trade and Development pointed out that China is coordinating epidemic prevention and control and economic development, China's manufacturing industry is in a leading position, and China's trade has maintained a high level of growth, providing support for the recovery of the world economy.

Liang Guoyong, senior economist of the United Nations Conference on Trade and Development: First, China has played a leading and exemplary role in responding to the epidemic effectively and its rapid economic recovery.

Second, China's stable production and strong exports have provided support for the recovery of the world economy from the supply side.

Brazilian economist Luis Becstein: China has released the "Carbon Peaking Action Plan by 2030" and other measures to transform the old development model into a more sustainable green development model. We will see China’s efforts in this field. Huge investment.

Osibenko, Executive Manager of the Ukrainian Chinese Chamber of Commerce: China’s economic opportunities and prospects are broad, and the Chinese government is actively promoting the construction of a domestic and international “dual cycle” development pattern to add impetus to development.

China is the world's economic engine, and many countries are learning from China's economic development experience.

Ignacio Martinez, a researcher at the Center for International Relations at the National Autonomous University of Mexico: President Xi Jinping has led China to develop steadily and truly bring benefits to the Chinese people. China is moving towards a better future and also provides support for the recovery of the world economy.