Train tickets for the first day of the Spring Festival Transport in 2022 are on sale today. Collect the ticket timetables!

China-Singapore Jingwei, January 3 (Xiong Jiali) The 2022 Spring Festival Transport will start on January 17 and end on February 25, totaling 40 days. According to regulations, today (January 3), passengers can purchase train tickets for the first day of Spring Festival travel through the Internet and telephone. You can buy tickets for New Year's Eve on January 17   According to the holiday ar 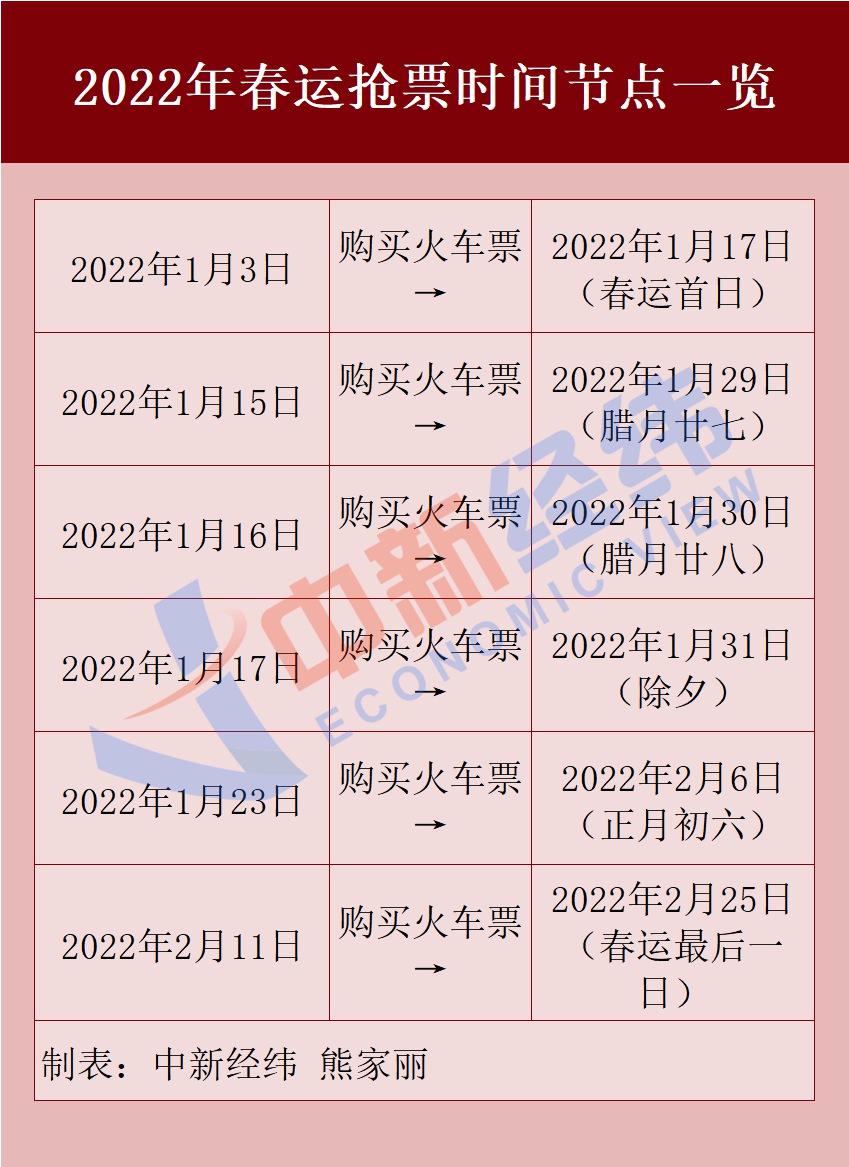 According to regulations, today (January 3), passengers can purchase train tickets for the first day of Spring Festival travel through the Internet and telephone.

You can buy tickets for New Year's Eve on January 17

According to the holiday arrangement, the Spring Festival holiday this year will be from January 31 to February 6, a total of 7 days.

During the Spring Festival transport period in 2022, the national railways are expected to send 280 million passengers, a year-on-year increase of 28.5%.

According to the National Railway Group, the railway transportation during the Spring Festival in 2022 will face multiple challenges such as precise prevention and control of the epidemic and transportation guarantee for the Beijing Winter Olympics. The situation is complex and changeable, and the organization of transportation services will become more difficult.

In this regard, the railway department has extended the ticketing service time of the 12306 website (including the mobile phone client) from 5:00 to 23:30 daily to 5:00 to 1:00 the next morning (except Tuesdays); 24-hour internet is provided For ticket refund service, the deadline for refunds has been extended from 25 minutes before departure at the station to before departure, and the 12306 client-side login-free refund channel has been added; the original ticket change service that can only be processed at the ticket issuing station after driving has been added to the online processing channel , At the same time, the self-service ticketing terminal adds the function of e-ticket change; the latest deadline for standby ticket purchase is adjusted from 6 hours before driving to 2 hours; and temporary electronic identity certificates for passengers are provided.

On January 2nd, China-Singapore Jingwei inquired on the 12306 website and found that the train tickets for the day before the Spring Festival Transport in 2022 (January 16) were sufficient in most areas, but the business special seats were more popular.

Take the departure from Beijing on January 16 as an example. As of 21:00 on January 2, there are very few business tickets left from Beijing to Tianjin, Chengdu, Fuzhou, Kunming, Nanjing and other places.

A screenshot of the remaining tickets for the Beijing-Fuzhou business special seats on January 16.

In addition, there are fewer remaining tickets for business special seats from Beijing to Changsha, Guangzhou, Guiyang, Hohhot, Hefei, Jinan, Shenyang, Wuhan, Zhengzhou and other places.

It should be noted that the online ticket sales times of different railway stations are not the same. Those who have travel needs should set the alarm clock in advance according to the station where they purchased the ticket, so as not to miss the ticket purchase time.

Expert: There is no need to advocate in-situ Chinese New Year in low-risk areas

Regarding the issue of whether to celebrate the Chinese New Year in situ during the Spring Festival, at the State Council’s Joint Prevention and Control Mechanism press conference on December 18, 2021, Liang Wannian, head of the expert group of the Leading Group for Epidemic Response and Handling of the National Health Commission, pointed out that localities must be based on risks. According to research and judgment, the whole country cannot be "one size fits all." It is necessary to conduct comprehensive analysis and evaluation, and introduce relevant policies in accordance with local conditions.

Areas at high risk of the epidemic, special areas such as ports and borders, and areas preparing for major events, should continue to maintain relatively strict control measures; other areas, comprehensively considering the risk level, personal immunity status, and epidemic situation, etc. , Accurate and temperature-controlled customs policies, avoid "one size fits all" and reflect the requirements for precise prevention and control.

Recently, Wu Zunyou, the chief epidemiologist of the Chinese Center for Disease Control and Prevention, also said that in high-risk areas, where the number of cases is large, and where the epidemic is not under control, in order to prevent the spread, it is possible to advocate local Chinese New Year.

In low-risk areas, there are no locally transmitted cases, and there is no need to advocate local Chinese New Year.

At present, Beijing, Shanghai, Chongqing, Guangzhou, Dalian and many other places have successively issued warnings on the prevention and control of the Spring Festival epidemic.

Among them, Shanghai’s "Regulations on Strengthening the Prevention and Control of the Epidemic During the New Year’s Day and Spring Festival" mentioned: In addition to returning home to visit relatives, necessary official duties, etc., it is not necessary to leave Shanghai and not to leave the country if it is not necessary. It is encouraged to spend the holidays in Shanghai and minimize the number of personnel. Flow; personnel from high-risk areas of the domestic epidemic should temporarily postpone coming to Shanghai and returning to Shanghai until the risk level of the area drops to a low risk before returning to Shanghai; for all those who come from or pass through areas with high domestic epidemic risk or the local government declares a closed management area Those who come back to Shanghai will be quarantined for 14 days for health observation, and 4 new coronavirus nucleic acid tests will be carried out.