Rentals in pandemic: supply begins to fall and prices tighten after confinement adjustments

The pandemic broke into the rental market just when its activity was consolidated in Spain. In the land of homeowners par excellence, leasing had ... 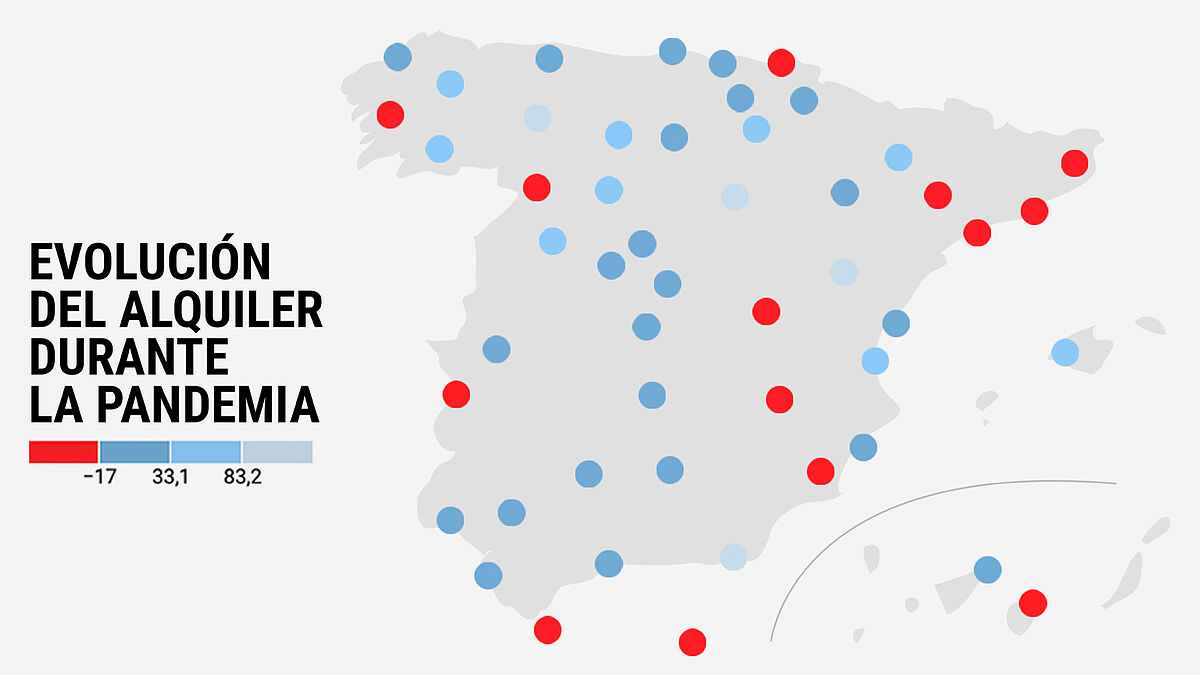 The pandemic broke into the rental market just when its activity was consolidated in Spain. In the land of homeowners par excellence, leasing had managed to gain a foothold in the face of the difficulties faced by more and more people in accessing a mortgage loan. However, the

coronavirus stopped all this expansion

and shook the board of landlords and tenants in such a way that only now, almost two years later, is it beginning to normalize: demand rises, supply begins to decline and approach levels close to the era pre-covid and prices are once again entering areas of tension.

The offer has been one of the keys in the evolution of the market since March 2020 and until the end of 2021. Large cities saw their

transfer of tourist flats to the traditional rental system

and all this resulted in a general drop in prices.

This behavior was especially evident in the larger cities and with more tension in rents.

ended March 2020 with 5,565 available homes and by November of that same year the figure had already more than doubled, to 12,970 that were advertised on the country's main real estate portals, according to data provided to EL MUNDO by

. The trend began to reverse at the beginning of this year, in January, when 10,622 homes were counted, and since then the number has been progressively decreasing to 6,753 in November. In total, 21.35% more than before the outbreak of Covid-19 which, transferred to income, has meant a decrease of 6.17%, from the 16.87 euros per square meter that were paid in the capital in March 2020 up to the 15.83 euros it cost in November.

The graph is similar in large Spanish cities where tensions have increased in recent years. In

the supply has risen 12% since the beginning of the pandemic compared to 7% in the decrease in prices; in

"There are two trends that have caused a general increase in supply. On the one hand, the shift from vacation rental apartments to traditional rental", points out

"Given that liquidity froze in the first months of the pandemic, supply increased dramatically, causing a drop in prices that mainly affected the center of large cities. In fact, in metropolitan areas, rents did not drop in price. And on the other hand, the real estate sector has proven to be one of those that has best withstood the impact of the pandemic, becoming a safe haven for many investors, which has triggered investment and therefore the product available ", he adds.

, which has become one of the real estate points that arouses the most interest in the Spanish residential market, and

, where many experts point out the impact of the law that limits rents, not so much in terms of the rents but in the supply.

have fallen by 6% since the start of the pandemic

"In Barcelona we see the negative effects of the limitation of rental prices and social housing endowments: less investment and less product available. Prices fell due to the increase in supply, although we observe that investment in the city, especially as a result of uncertainty and legislative difficulties, "explains

The regulation in question came into force in September 2020 and requires freezing or lowering the price of rents in areas with residential "tension" in the 60 Catalan cities with more than 20,000 inhabitants. Since its approval, experts have questioned its effectiveness on income and have warned of the uncertainty and legal uncertainty it generates between owners and investors. The law is still pending for the Constitutional Court to resolve the appeal that the government itself and the PP filed against the rule.

, the supply has dropped by 16% since the start of the pandemic, in contrast to the 14% increase in prices, which corroborates that the Andalusian city has become one of the benchmarks of the Spanish real estate scene and in one of the places that arouses the most interest among investors and owners, large and small.

"Malaga is an example of a very resilient market that is showing great vigor. Although it has also suffered the effects of tourist flats, the city is one of the great" beneficiaries "of teleworking and that the population is looking for a new a house to live in. We are seeing in it a very liquid market that is growing faster than that of sister cities like Seville, "says Alejandro Bermúdez.

However, last summer has been a turning point, both for supply and prices, and the

offers some keys to contextualize the reasons for the change. "With the announcement of the return to universities, the end of many of the ERTE, teleworking turned into a hybrid tool and the return of tourism, the offer begins to decrease progressively and this reduction causes prices to slowly go away stressing ", they point out.

In this way, rents face the end of the year recovering part of the lost tensions and point to 2022 in which prices will rise again. The

(ANA) also predicts an increase in prices for next year. "The breeding ground is being created for rents to experience a price increase of around 5%. This rise would affect all those homes offered for rent on the market, to which we should add the rise in the CPI (5.6% rate annual IPCA of November) which is causing that many incomes, in their annual review, are becoming more expensive, "explains

According to his analysis, the increase in taxation, longer rents, the possible freezing of rents and intervention of prices by law, increases in inflation and the increase in the cost of construction materials are the main causes that will reduce the supply of rental housing and increase rents in 2022.

Another phenomenon that the coronavirus pandemic has brought with it as far as the rental market is concerned is the so-called 'oil stain', that is, the displacement of the population from city centers to the outskirts and even , towards the municipalities and cities of the periphery.

This movement has left behind an increase in demand in towns close to large cities and, as a consequence, an increase in prices or a decrease in supply. This is the case of

of available homes between March 2020 and November 2021 decreased by 18.7%, according to data from Fragua by Atlas Real Estate Analytics. And without leaving the Madrid community, in

there has been an increase in rents in the same period of 10.17% and in

has decreased by 23.7% since the first confinement while prices have risen 4.6%.

In the first case, the pandemic has contracted supply by 23.5% but has raised prices by 29.7%, which may be an indicator of the increase in demand in the town.

In the second case, rents have increased by 44.7% since March 2020, compared to an available stock that has been reduced by 58.5%.

HousingHome prices will continue to rise in 2022: is it a good time to become a homeowner?