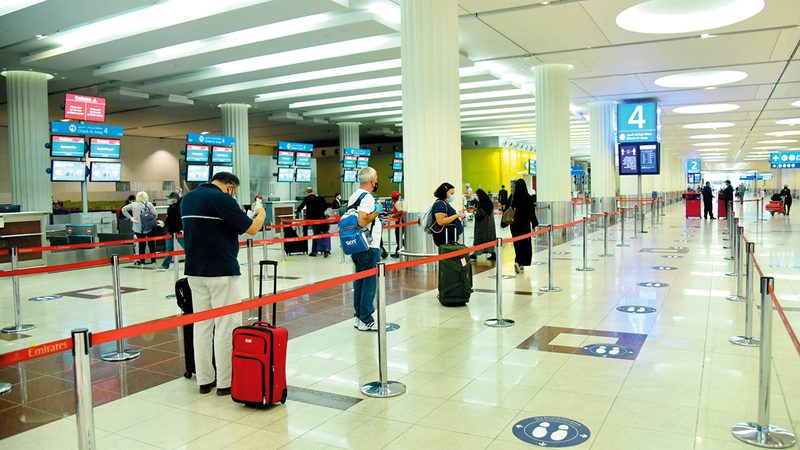 198 destinations are currently served by airlines operating at the airport

According to the data monitored by "Emirates Today", Dubai International Airport has restored 99% of the interconnection network with the countries of the world, 83% of the destinations, and 117% of the number of airlines that were operating their flights through the airport before the "Covid-19" pandemic, where it operates. Dubai International Airport has more airlines compared to pre-pandemic levels.

This data includes airlines designated for passenger operations, with the exception of air freight companies.

"Dubai International" has continued to record continuous growth rates since the resumption of receiving international visitors in Dubai during July 2020, following the "Covid-19" pandemic.

Dubai Airports confirmed that Dubai Airport, the busiest in the world, returned to work at its full operational capacity at 100%, after the opening of the last phase of “Concourse A” in Terminal 3, where the return included all stations, and “Concourse.” , restrooms, restaurants, and retail outlets.

The Corporation had expected, in a statement, that Terminal 3, which is now operating at full operational capacity, would provide its services to more than 1.6 million passengers in the second half of this December, during the travel period and seasonal holidays.

With the increasing demand for travel until the end of this year, the number of passengers is expected to reach 28.9 million passengers by the end of the year, achieving an estimated increase of 2.1 million over the forecast of September 2021.

International air carriers continue to resume their operations through Dubai International Airport, while data issued by Emirates Airlines and Fly Dubai showed a continuous increase in the number of passenger destinations, within the network of the two carriers, with the application of air travel protocols, facilitating the travel of UAE citizens and residents. and tourists, while maintaining the safety of visitors and communities.

The latest data issued by OAG International, a provider of airport and airline data, revealed that Dubai International Airport maintains its position as the largest air transport crossing in the world in terms of seat capacity provided by air carriers on international flights departing at the airport.

According to the corporation, Dubai Airport owns six of the 10 busiest international flight routes, which operate to and from the airport, and flights between Dubai and Riyadh, the busiest among international flight routes in the world, recorded about 285,000 seats during December 2021, then the flight path between Dubai London Heathrow is in third place with 253,000 seats, then the flight path between Dubai and Jeddah is in fifth place with 215,000 seats.