Dubai hosts “LPG Week” for the first time in the region

His Highness Sheikh Ahmed bin Saeed Al Maktoum, President of the Dubai Civil Aviation Authority, President of “Dubai Airports” and Chief Executive Officer of “Emirates Airlines” and the Group, inaugurated the activities of “Liquid Petroleum Gas Week”, which is hosted by Dubai over three days, with its first meeting In the eastern region 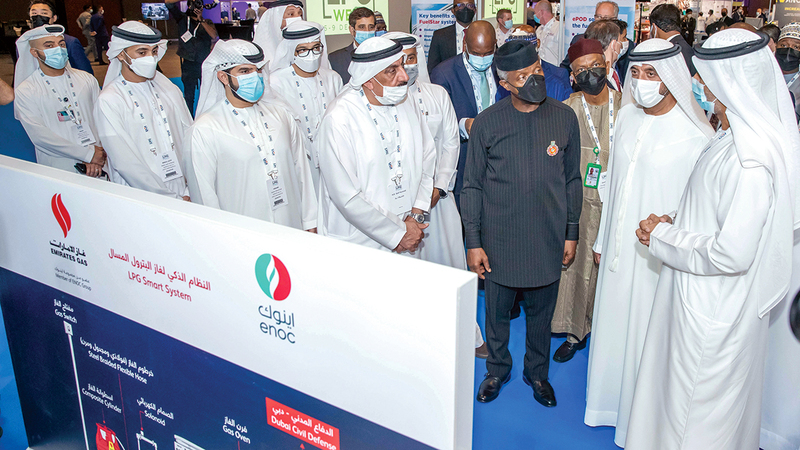 Dubai hosts “LPG Week” for the first time in the region

Ahmed bin Saeed during the opening of the "LPG Week".

His Highness Sheikh Ahmed bin Saeed Al Maktoum, President of the Dubai Civil Aviation Authority, President of “Dubai Airports” and Chief Executive Officer of “Emirates Airlines” and the Group, inaugurated the activities of the “Liquid Petroleum Gas Week”, which is hosted by Dubai over three days, with its first meeting In the Middle East, emphasizing Dubai's leading position as an advanced global center for innovative energy solutions, and in appreciation of its sustainable approach to development.

The "LPG Week 2021" will be held at the Dubai World Trade Center under the slogan "Energy for Tomorrow", organized by the World Association of LPG, and hosted by the "ENOC" Group.

The event, which will run until tomorrow (Thursday), sheds light on the LPG sector and explores its growth potential, while providing the opportunity for new business partnerships in this field.

The opening ceremony was attended by the Vice President of the Republic of Nigeria, Professor Yemi Osinbajo, and the Deputy Director General of the International Renewable Energy Agency (IRENA), Gauri Singh, along with a number of senior officials.

Saif Humaid Al Falasi, CEO of ENOC Group, said: “In line with our vision to be an innovative energy partner that delivers sustainable value and outstanding performance in the sector, we at ENOC Group are committed to supporting the long-term growth and development of the energy sector.

Realizing that building a sustainable future for all requires resorting to alternative technologies, as a pioneering company, we will work to enhance discussions within (LPG Week), in order to advance the transformation of the energy sector, encourage the adoption of sustainable development initiatives, and contribute to building a more sustainable future.”

The opening included a panel discussion in which a group of industry leaders from around the world participated, including: Nader Al Fardan, Senior Director of Gas Marketing and General Manager of Emirates Gas, Satish Kumar Vaduguri, Director of Marketing at Indian Oil Company, and Secretary General and CEO of the Energy Council. Dr. Angela Wilkinson, Director of the Sustainable Energy Division at the United Nations Economic Commission for Europe, Scott Foster, Group Executive Director of the Nigerian National Petroleum Corporation, Yemi Additungi, and CEO of SHV Energy, Bram Greber.

During the dialogue session, the participants discussed the role of liquefied petroleum gas and (renewable) in securing energy in the future, taking into account the main challenges facing the energy sector in the future, including: climate change, air quality, lack of energy, and economic development.

The “LPG Week” is the most important event organized by the World LPG Association, which was launched in Amsterdam during the 32nd session of the World LPG Forum and the European LPG Conference 2019. The week’s events are held in a different city every year Under its umbrella, it brings together many CEOs of the most prominent LPG companies, ministers and government officials, as well as representatives of major international organizations and the media, to explore the prospects for developing the LPG sector, discuss growth opportunities and build new business relationships.