Merchants: The demand for gold crafts with decorations and colors is growing in celebration of the fiftieth anniversary of the Union

Officials of outlets for gold and jewelry trade stated that the markets recently witnessed a remarkable growth in the demand for buying gold crafts, with decorations and colors that celebrate the fiftieth birthday of the UAE, with the support of several companies offering crafts for different products that include colors or symbols that suit their needs. 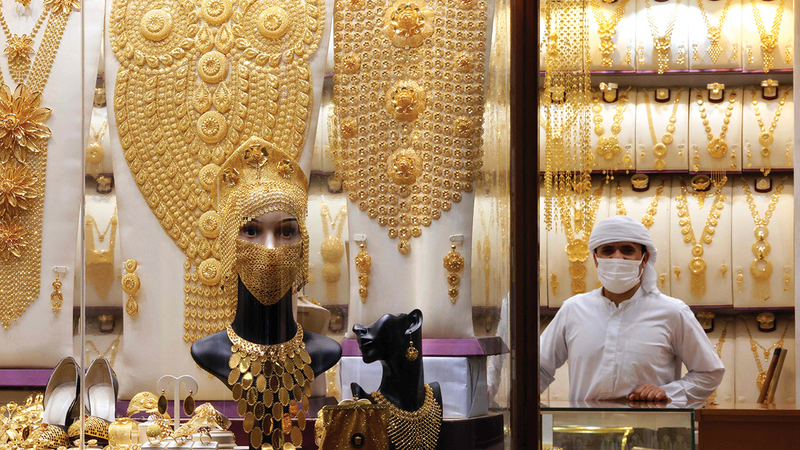 "Holiday" and falling prices support the improvement in sales

Merchants: The demand for gold crafts with decorations and colors is growing in celebration of the fiftieth anniversary of the Union

Officials of outlets for gold and jewelry trade stated that the markets recently witnessed a remarkable growth in demand for the purchase of gold crafts, with decorations and colors celebrating the fiftieth birthday of the UAE, with the support of several companies offering crafts for different products that include colors or symbols commensurate with the celebration of that occasion, two notices To the recent declines in the price of gold, supported the growth of demand.

They pointed out, to "Emirates Today", that the handicraft companies offered larger quantities of products than previous years, to celebrate that occasion, in order to keep pace with the golden jubilee of the founding of the state, explaining that the rates of demand for souvenir products included citizens and tourists, especially with the varying sizes offered. for those things.

And gold prices recently recorded decreases, whose value ranged between 2 and 2.25 dirhams per gram of various carats, according to the price indicators announced in Dubai and Sharjah.

In detail, the director of the "Dahkan Jewelery" company, Jay Dehkan, said that "the markets have recently witnessed a growth in demand for artefacts during the fiftieth Union Day holiday," noting that "the stores recorded remarkable turnout rates for artefacts, which were presented with decorations celebrating the fiftieth anniversary of the union and the golden jubilee." For the state, whether it includes the colors of the state flag or symbols that express the celebration of the occasion, such as the number 50 or the letters of the state’s name in English on different crafts.

He added that "the growth of activity on these handicrafts was not limited to citizens only, but also included some purchases from tourists who came to buy as souvenirs, especially small-sized products."

For his part, the director of Al-Ayyam Jewelry, Galish Saqr, explained that “the growth in the demand for handicrafts, especially products that contain decorations and inscriptions celebrating the 50th Union Day of the State, comes with the support of the decline in prices, in addition to the large-scale offerings from manufacturers and suppliers.” Crafts celebrate this occasion, through different decorations and inscriptions, while keeping pace with the occasion of the country’s celebrations of the golden jubilee, which made the offerings of these types of products larger and more diversified compared to the similar occasion during the past years.”

He pointed out that "the markets, in general, witnessed a state of recovery in demand for handicrafts, which included the growth of sales for tourist groups, which included ordinary crafts with products offered on the occasion of the celebration of the fiftieth anniversary of the Union."

The manager of the "Mashoom Jewelery" store, Raj Bahi, said that "the length of the fiftieth holiday of the Union, reflected positively on the sales of handicrafts in the markets, which witnessed a boom in demand for handicraft sales in general, especially on the products that were presented to celebrate this occasion. Which companies have put on the market this year, in a larger and more diversified and expanded way compared to previous years, with the fact that the occasion during the current year is different from previous years.”

He added that "tourist groups' sales witnessed great activity rates recently, during the holiday period," noting that "most of the sales of handicrafts were concentrated in 18 and 21 carats."

Handicraft companies have increased the volume of products offered to celebrate the golden jubilee of the founding of the state.