China News Service, Ningde, December 3 (Reporter Lv Qiaoqin) Win the battle against poverty and create a window for China to get rid of poverty; focus on building a "one core, two corridors and five axes" development pattern to welcome the arrival of the "trillion-industrial era"... Ningde City, in the coastal area of ​​northeastern Fujian, has continued to rank among the forefront of Fujian in 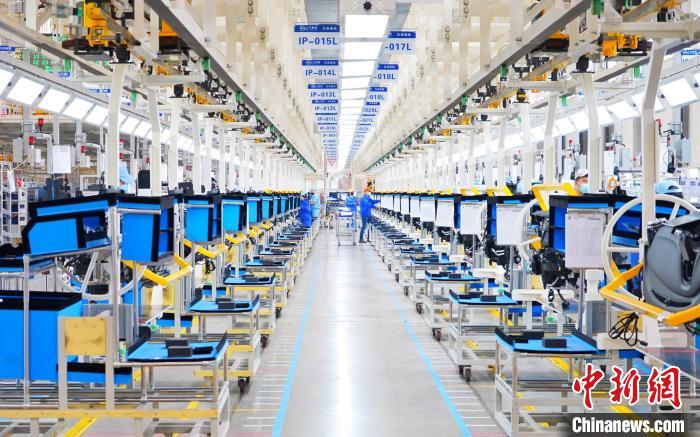 China News Service, Ningde, December 3 (Reporter Lv Qiaoqin) Win the battle against poverty and create a window for China to get rid of poverty; focus on building a "one core, two corridors and five axes" development pattern to welcome the arrival of the "trillion-industrial era"... Ningde City, in the coastal area of ​​northeastern Fujian, has continued to rank among the forefront of Fujian in recent years in terms of economic indicators, showing strong stamina for development.

In the first three quarters of this year, the growth rate of 9 major economic indicators of Ningde City ranked first in Fujian. Among them, GDP, the value added of industries above designated size, total import and export value, and the balance of domestic and foreign currency loans of financial institutions ranked first in Fujian.

The picture shows the automobile instrument panel assembly operation of SAIC Ningde base.

Liang Weixin, secretary of the Ningde Municipal Party Committee, recently said in an interview with a reporter from Chinanews.com that Ningde has entered the "fast lane" of high-quality development through laying the foundation and accumulating energy over the years.

Supporting Ningde's economic development into the "fast lane" is the continued growth of its industry.

The city has formed four leading industrial clusters of lithium battery new energy, new energy automobile, stainless steel new material, and copper material. It has successively introduced more than 200 upstream and downstream enterprises, covering all links of the industrial chain, including stainless steel new material and lithium battery new energy. The industry has grown into an industrial cluster with an annual output value of hundreds of billions (RMB, the same below).

The eleventh congress of the Fujian Province of the Communist Party of China held a few days ago proposed that Ningde will build an important growth pole for high-quality development in the province.

The answer given by Ningde is: to speed up the development and construction of Sandu Australia, and vigorously develop new energy, new materials and advanced manufacturing.

The picture shows a scene of Ningde City.

As one of the leading industries in Ningde City, since the establishment of Ningde Times New Energy Technology Co., Ltd. ("Ningde Times") in 2011, Ningde's lithium new energy industry has developed rapidly and has become the world's largest polymer lithium-ion battery production base.

From 2017 to 2020, CATL ranked first in the world for the total installed capacity of power batteries in electric vehicles for four consecutive years.

Driven by "leading" enterprises, Ningde has introduced more than 80 industrial chain projects such as Zhuogao, Shanshan, Xiamen Tungsten, Qingmei, Bangpu, etc., covering key materials such as positive electrodes, negative electrodes, separators, electrolytes, and battery components. The project has been completed and put into production and has a total battery production capacity of 295GWh under construction.

As of the end of October, Ningde City's lithium new energy industry completed an output value of 114.5 billion yuan that year.

It is worth mentioning that, while Ningde strives to promote the layout of major projects of leading enterprises along the coast, it also guides high-end chain projects to extend to the mountainous areas. Not only are there hundreds of billions of industry leaders in the coast, but also mountainous counties have industrial projects with a scale of tens of billions of output value. .

Looking forward to the future, Ningde proposes that in the next five years, we will focus on building a development pattern of "one core, two corridors and five axes"; strive to build a core area for the global new energy and new materials industry, a pilot area for the modern Bay Area economy, and a model area for rural revitalization across the country. , Green, low-carbon, industrial and livable pioneer area.

Leading by one core, that is, accelerating the construction of a modern ecological bay city with "one city, multiple districts, strong towns and surrounding bays" with Sandu'ao as the core; supporting two corridors, namely the coastal blue economic corridor and the mountain green economic corridor; five-axis linkage , That is, relying on rapid transportation networks such as railways, expressways and arterial highways, connecting various industrial parks and industrial platforms to build five development axes from Sanduao to Gutian County, Pingnan County, Zhouning County, Shouning County, and Zherong County.

The picture shows the marine fish rafts in the Sandu waters of Jiaocheng District, Ningde, after the technology has been upgraded.

Observers believe that Ningde's development pattern of "one core, two corridors and five axes" is intended to promote the efficient flow of coastal and mountain resource elements, the organic connection of the industrial chain, and the realization of the simultaneous development of mountains and seas and a win-win situation.

Mindong was once a "fault zone" for economic development along the southeast coast of China.

Nowadays, after getting rid of poverty, Ningde's economy is bursting with vitality.

Ningde plans to develop the layout and strive to build an important growth pole for high-quality development in Fujian Province, with a clear path and promising prospects.

News/Politics 2022-03-21T09:07:10.173Z
General Secretary Xi Jinping's important speech at the meeting of the Standing Committee of the Political Bureau of the CPC Central Committee pointed out the direction and boosted motivation for coordinating epidemic prevention and control and economic and social development
Life/Entertain 2022-02-27T05:14:38.814Z
"Ink" the modernized new Lishui: lucid waters and lush mountains complement each other with common prosperity
Business 2022-05-10T03:09:50.314Z
Fujian accelerates the development of the whole industry chain of electric ships
ADS
Business 2022-05-04T07:11:28.050Z
Fu'an, a tea town with unique advantages, builds a demonstration area of ​​"Three Tea Integration"
News/Politics 2022-04-22T09:37:53.050Z
Fujian promotes the integrated development of Fujian and Taiwan biopharmaceutical industries to support Taiwanese physicians to work in Fujian
Business 2022-03-15T07:11:10.197Z
China's civil aviation accelerates the creation of a world-class airport cluster in Chongqing
Business 2022-05-04T03:29:39.831Z
[Ten years @every struggle for you] Gutian, Fujian: "Photovoltaic +" and "digitalization" empower the development of the edible fungus industry
News/Politics 2022-02-25T02:49:39.449Z
The State Council agrees in principle with the "14th Five-Year Plan for the Development of Urban Clusters in the Middle Reaches of the Yangtze River"
News/Politics 2022-02-26T16:08:36.047Z
[Voice of the Two Sessions] Liu Zhiren, deputy to the National People's Congress: Optimizing the business environment is the liberation of productivity-Chinanews.com video