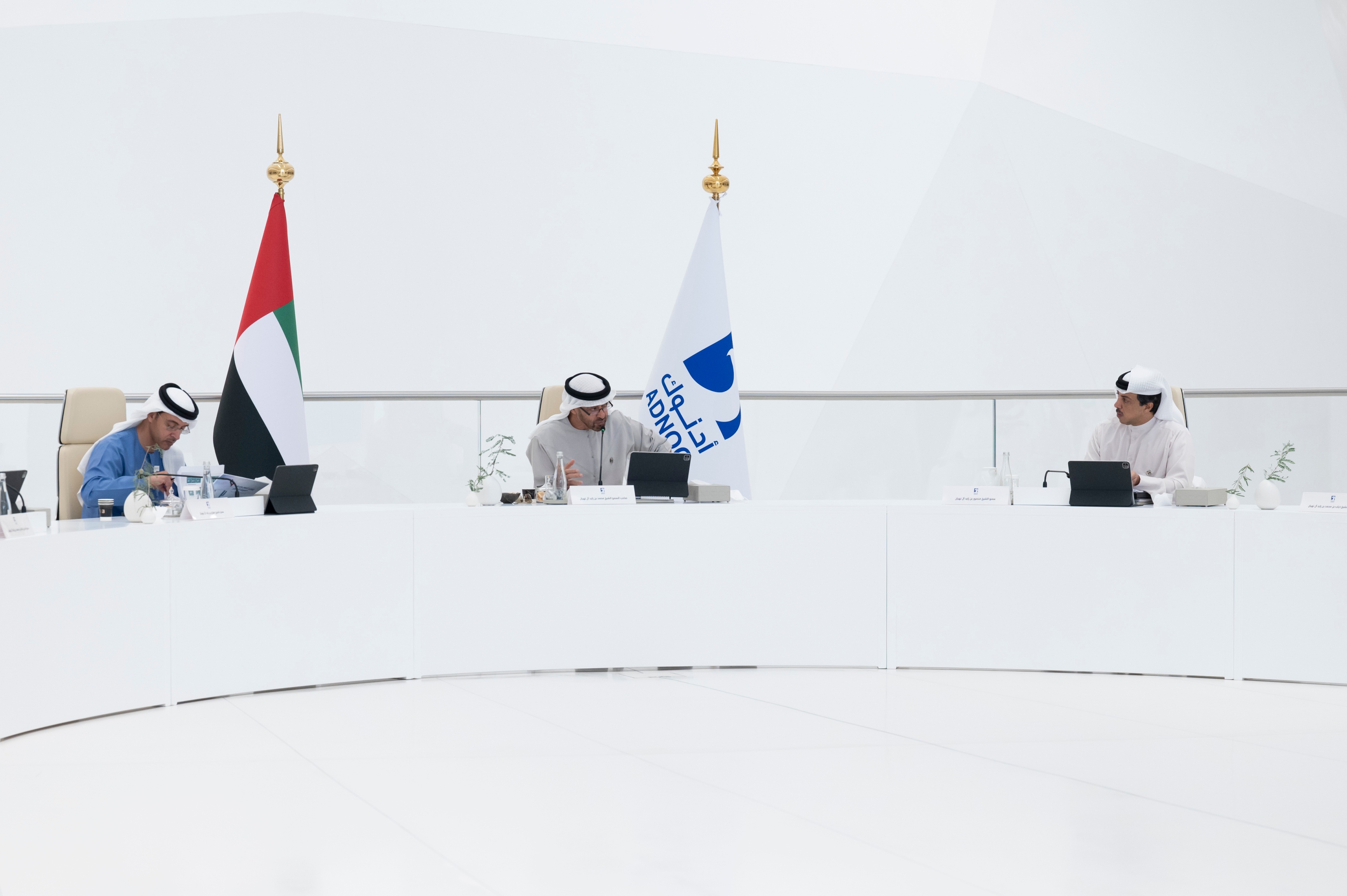 His Highness Sheikh Mohamed bin Zayed Al Nahyan, Crown Prince of Abu Dhabi and Deputy Supreme Commander of the Armed Forces, launched a strategic partnership between the Abu Dhabi National Energy Company "TAQA", the Mubadala Investment Company "Mubadala" and the Abu Dhabi National Oil Company "ADNOC" to own each of these companies. A stake in the Abu Dhabi Future Energy Company “Masdar”, with the aim of developing a leading global portfolio of clean energy in addition to strengthening efforts in the field of renewable energy and green hydrogen in pursuit of climate neutrality by 2050.

His Highness stressed that the UAE is continuing to consolidate its capabilities and its leading role in the energy sector, and that it continues to transform challenges into opportunities and find practical and innovative solutions to secure a low-carbon future.

This partnership brings together three of the largest leading national companies in the energy sector, with a current and exclusive production capacity of more than 23 gigawatts of renewable energy.

The company's total production capacity is expected to reach 50 gigawatts by 2030, which means that Masdar will become one of the largest clean energy companies in the world, placing it at the leading position in this sector globally.

The new partnership in "Masdar" is an extension of the "Abu Dhabi Hydrogen Consortium" initiative that was launched in January 2021, and included under its umbrella "Mubadala", "ADNOC" and "ADQ" (the parent company of TAQA), in addition to the strategic green energy partnership that It was launched on November 17 between ADNOC and TAQA, and the presence of the three partner companies in "Masdar" contributes to the growth and expansion of the company.

As the UAE prepares to host the twenty-eighth session of the United Nations Conference of the Parties to the United Nations Framework Convention on Climate Change “COP 28” in 2023, this strategic partnership will contribute to enhancing the position and efforts of the UAE and Abu Dhabi to keep pace with the transformation in the energy sector by enhancing capabilities in The field of clean energy and emission reduction.

This strategic partnership will have a major role in reducing carbon emissions locally and globally, accelerating the UAE's march towards achieving climate neutrality by 2050, and enhancing the country's leading role in the field of green hydrogen production.

"In line with the vision of the wise leadership to join forces and enhance cooperation to take advantage of partnership opportunities, this coalition brings together three of the largest companies in Abu Dhabi to allow us to keep pace with the transformation in the energy sector with strong momentum. This partnership, which coincides with the country's celebrations of its golden jubilee, marks the start of a new phase entirely to Masdar’s work in the global clean energy field..and we are confident that this strategic partnership will create many opportunities for growth and development in the field of renewable energy and hydrogen locally and internationally.”

His Excellency added: "After the wise leadership directed the establishment of "Masdar" fifteen years ago, the company has succeeded in establishing an advanced position for itself as a multi-faceted initiative in the field of renewable energy and sustainability. After this strategic partnership, "Masdar" will enhance its role locally and globally, and for all of us We are confident that through ADNOC’s direct stake in Masdar and in close cooperation with our partners, we will present a new model through smart and innovative projects and initiatives in the energy sector to achieve additional value and drive sustainable growth in the UAE.”

ADNOC is one of the leaders in the emerging hydrogen market and has ambitious plans to develop hydrogen value chains at the local and global levels, utilizing its commercial capabilities, infrastructure and logistical network.

For his part, His Excellency Khaldoon Khalifa Al Mubarak, Managing Director and CEO of Mubadala Group, said: “Today marks the beginning of a new chapter in the path of Masdar, our world-leading company in the field of renewable energy, which we initiated 15 years ago due to our conviction in the ability of innovation to drive growth. "Masdar" today represents a successful example for the industries of the UAE, and reflects the future vision of our wise leadership."

His Excellency added, "The increasing climate challenges require us to continue searching for innovative ways to produce clean energy, and this strategic partnership comes in line with Mubadala's approach and its constant endeavor to enhance joint action, and also supports the vision of the UAE and its efforts as a leading country in addressing climate change."

We look forward to working with our partners ADNOC and TAQA to support the growth of Masdar and its path to finding new solutions to climate challenges.”

His Excellency Mohammed Al-Suwaidi, Chairman of TAQA’s Board of Directors, said: “Taqa’s strategy is based on achieving leadership in reducing the carbon footprint in the electricity and water sector. And “Mubadala” in the fields of renewable energy and hydrogen, allows us to raise our production capacity of clean energy to more than 50 gigawatts by 2030, which qualifies us to become one of the largest contributors to the production of renewable energy worldwide. The opportunity to benefit from the distinguished expertise in this partnership will enable us to occupy a leading position in the green hydrogen sector globally, and we look forward to being the leading national company in the development of clean energy solutions in the UAE and globally.”

His Excellency Dr. Sultan Ahmed Al Jaber will continue in his role as Chairman of the Board of Directors of Masdar, overseeing its new strategy in the field of renewable energy and green hydrogen.

Under the agreement, "TAQA" will assume the leading role in the renewable energy project, Masdar, as it will acquire 43% of the share, while Mubadala will retain 33%.

ADNOC will own 24%. As for the Masdar Green Hydrogen Project, ADNOC will take the leading role by acquiring 43%, while Mubadala will acquire 33% and Taqa 24%.

It is noteworthy that more details and governance structures for the new partnership are subject to the completion of the requirements for the deal, including obtaining approvals from regulators and related parties.

Mubadala established Masdar in 2006 with the aim of strengthening the UAE’s leading role in the global energy sector, advancing the country’s economic diversification and promoting the climate agenda. Today, Masdar operates in more than 33 countries across six continents, and has developed and invested in Various projects around the world worth nearly $20 billion... Masdar City, a model for pioneering sustainable urban development in Abu Dhabi, will remain under the ownership of Mubadala.