Don't use e-cigarettes as cigarettes! A variety of toxic substances will be produced when used

There are 18 e-cigarette specialty stores in the pedestrian street of Optics Valley World City. Photo by Tian Qiaoping, reporter from Changjiang Daily   □ Intern Zhao Xinyu of Changjiang Daily, correspondent Tian Juan and reporter Tian Qiaoping   On November 26, the "Decision of the State Council on Amending the Implementation Regulations of the Tobacco Monopoly Law of the People's Republic of C 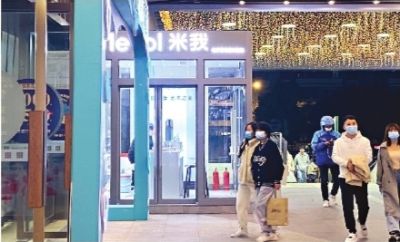 There are 18 e-cigarette specialty stores in the pedestrian street of Optics Valley World City.

On November 26, the "Decision of the State Council on Amending the Implementation Regulations of the Tobacco Monopoly Law of the People's Republic of China" was announced. Professor Liu Huiguo from the Department of Respiratory and Critical Care Medicine, Tongji Hospital, Tongji Medical College, Huazhong University of Science and Technology paid attention to this news for the first time. He paid special attention to the regulations that "e-cigarettes and other new tobacco products shall be implemented with reference to the relevant regulations of cigarettes in this Regulation."

The first time I saw this news was Liu Huiguo's colleague-Associate Professor Wang Minghuan of the Department of Neurology of Tongji Hospital.

Wang Minghuan participated in a large-scale study of "China's smoking trend and its impact on chronic diseases: a continuous national cross-sectional survey from 2003 to 2013", and has maintained continuous attention to new types of tobacco such as e-cigarettes.

The "Regulations for the Implementation of the Tobacco Monopoly Law of the People's Republic of China" has been revised three times since its promulgation in 1997.

In the third revision, more than 10 places were revised.

Among them, Article 65 "E-cigarettes and other new tobacco products shall be implemented with reference to the relevant regulations on cigarettes in this Regulation" is the newly added content and the content that has received the most attention.

The first supervision of e-cigarettes in my country was in 2019.

On the eve of Double Eleven this year, the State Administration for Market Regulation and the State Tobacco Monopoly Administration issued the "Notice on Further Protecting Minors from E-cigarettes", urging e-cigarette companies to close online sales platforms and stop all For online marketing, all online platforms no longer sell e-cigarettes.

The newly revised "Regulations for the Implementation of the Tobacco Monopoly Law of the People's Republic of China" equate the management of new types of tobacco such as e-cigarettes with traditional cigarettes, ending the window period for e-cigarette supervision.

The Pedestrian Street of Optics Valley World City in Luxiang is an important place for young people from nearby colleges and universities to shop and relax on weekends.

On November 20 and November 27, two Saturdays, Changjiang Daily reporters went to the pedestrian street of Optics Valley World City to see who would buy e-cigarettes.

In the pedestrian street with a length of more than 1,300 meters, 14 brands of e-cigarettes, including Magic Di, RELX, and Yuzi, have opened 18 specialty stores, and each specialty store has an experience area.

The reporter observed that those who entered the e-cigarette store in the past two days were fashionable and young-faced people, and basically no people over 30 years old were seen.

After a semester, Xiao Liu felt the pressure from his studies. A friend took him to an e-cigarette store here.

In the past six months, Xiao Liu has been completely accustomed to e-cigarettes, has a fixed taste, business, and will pay attention to brand points activities.

Xiao Liu explained that although a cigarette stick can be replaced with a different cartridge, he still can't help but buy it when other brands have beautiful colors and novel flavors. This has become one of his life burdens.

As a sophomore this year, he will spend 1/5 of the monthly fixed living expenses to buy new e-cigarette products, the amount is about 300 yuan.

Unlike Xiao Liu's process from trial to love, Xiao Li's starting point for smoking e-cigarettes is to "quit smoking."

Xiao Li subjectively believes that e-cigarette smoking is not easy to become addicted, easier to control, and more difficult to become dependent on it.

When the reporter asked "what is your understanding of the actual ingredients and specific hazards of e-cigarettes", he could not answer at all.

"The original intention of e-cigarettes was to make a smoking cessation product to help people who smoke for a long time and who are relatively addicted to cigarettes. But now e-cigarettes go to another extreme." Liu Huiguo said.

Liu Huiguo has been concerned about tobacco for a long time.

More than 90% of the COPD patients he manages have a history of long-term smoking.

He said that few long-term smokers use e-cigarettes to quit smoking, and more people are early adopters and become a fashion for young people. This is a new problem.

The side effects of e-cigarette smoking have not yet been clinically reflected. Liu Huiguo explained: This is because e-cigarettes have only risen and become popular for a few years. Some hazards like smoking cause COPD to accumulate for a certain amount of time, and at present There is very little research on e-cigarettes.

In July of this year, the World Health Organization released the "WHO Global Tobacco Epidemic Report 2021" that e-cigarettes are harmful.

The evidence is that the aerosol generated during the use of e-cigarettes usually contains known toxic substances such as ethylene glycol, aldehydes, volatile organic compounds (VOC), and metals.

It is worth noting that many young people who are new to e-cigarettes think: "It doesn't matter if you taste it, it's harmless anyway."

Wang Minghuan began to study the relationship between smoking and chronic diseases in 2016.

This study brought Wang Minghuan "three shocks": First, Chinese smokers do not quit smoking actively, and the rate of quitting is very low; second, adolescent smoking is more harmful than adult smoking. Animal studies have found that the nicotine in tobacco is harmful to minors. The cognitive impairment of mice is very obvious. Starting from smoking in adolescence, respiratory diseases and cardiovascular and cerebrovascular diseases increase significantly in adulthood. Third, most of the smokers in my country start smoking before the age of 24.

The main ingredient of e-cigarettes is nicotine, which is an addictive substance.

This makes it more difficult for my country to control tobacco.

Liu Huiguo reminded that from the perspective of epidemics, when the economy develops to a certain extent, tobacco consumption will decrease and the prevalence of COPD will decline, but my country has not decreased but increased.

The generation that is currently entering the peak of COPD incidence was young smokers in the 1980s, when tobacco advertisements were rampant.

Wang Minghuan believes that the vast majority of smokers in my country now have an initial smoking age before 24, which suggests that if this peak can be suppressed, the overall smoking rate in my country will decline.

But now, this group is most vulnerable to the temptation of e-cigarettes.

It is time for new tobacco products such as e-cigarettes to be included in cigarette management.

Both experts Liu Huiguo and Wang Minghuan hope that the control of young people's consumption of electronic cigarettes should be stricter.