The UAE government launches the "Virtual Market for Software Interfaces"

Embodying the directives of His Highness Sheikh Mohammed bin Rashid Al Maktoum, Vice President and Prime Minister of the UAE and Ruler of Dubai, to provide the best government services globally, the UAE government launched the "Virtual Market for Software Interfaces", which provides software interfaces (APIs), to connect government systems 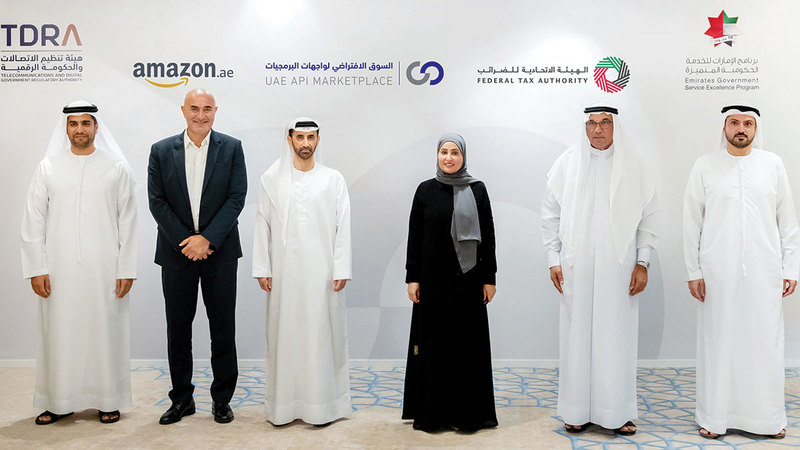 It enhances the government's digital transformation efforts, speeding up procedures and facilitating the customer's journey

The UAE government launches the "Virtual Market for Software Interfaces"

Embodying the directives of His Highness Sheikh Mohammed bin Rashid Al Maktoum, Vice President and Prime Minister of the UAE and Ruler of Dubai, to provide the best government services globally, the UAE government launched the "Virtual Market for Software Interfaces", which provides software interfaces (APIs), to link government systems with other systems. And private sector applications in an automated manner, facilitating the process of developing applications, creating interconnected digital solutions and services with added value by programmers, developers and innovators in the private sector, including designing government services, and providing them through their channels to automate business, simplify procedures and facilitate people’s lives, which represents a model A new digital cooperation between the public and private sectors, which enhances investment opportunities and the growth of the digital economy, through a system for exchanging services and systems data between government agencies and the private sector.

Minister of State for Government Development and the Future, Ohoud bint Khalfan Al Roumi, stressed that the "virtual market for software interfaces" translates the government's role as a platform to stimulate cooperation and partnerships with the private sector in creating and providing advanced and fast digital government services, and reflects the government's directions to accelerate digital transformation in services, and achieve integration. and interconnection in systems, to provide a smooth, efficient and fast customer experience at every time and place.

She said that the market will provide an environment that enables programmers and application developers to take advantage of government software interfaces, inventing new solutions and services, and launching start-up companies that benefit from these interfaces in providing and developing interconnected and seamless digital government services, calling on companies, entrepreneurs, application developers and programmers to take advantage of this initiative. And expanding it through new partnerships with government agencies, in a way that enhances the digital transformation of the country.

The UAE government launched the first partnership within the “Virtual Market for Software Interfaces”, which included the Federal Tax Authority, the Communications Regulatory Authority and the Digital Government, and the “Amazon International Company”, according to which the services of the Federal Tax Authority are linked with the company’s systems, thus contributing to the automation of operations. And speeding up the process of registering suppliers on Amazon in the UAE.

The market was launched in cooperation between the Emirates Program for Excellence in Government Service, the Telecommunications Regulatory Authority and the Digital Government, as part of the government's initiatives to accelerate digital transformation in the country.

Vice President of Amazon Middle East and North Africa, Ronaldo Mouchawar, said: “We are proud to be the first company in the UAE to integrate the scope of its work with the (Virtual Marketplace for Software Interfaces), which is a pioneering government application that establishes the position of the UAE government at the forefront of government innovation and leadership. intellectual world wide.

The partnership with Amazon is the first fruit of the success of the virtual market for software interfaces, and represents a starting point that opens the way for the launch of new partnerships. It contributes to keeping pace with the developments of the digital economy through partnership and integration between government agencies and the pioneers of the private sector.

• Providing a smooth, efficient and fast customer experience at every time and place.

The screw: a step forward on the road to digital life

The Director General of the Communications Regulatory Authority and Digital Government, Majed Al-Mismar, said that the "virtual market for software interfaces" is an advanced step on the path of digital life that achieves prosperity and happiness for all, by providing proactive services from everywhere, around the clock, and in a streamlined environment in which efforts are combined. Governmental and private agencies to serve customers.

He added that digital transformation in today's world is no longer the task of governments alone, but rather the result of cooperation and partnership between various sectors, and hence the launch of the "marketplace" is an important station on the path of a comprehensive digital government that meets the expectations of digital dealers.

The gardener: more ease and efficiency in performance

The Director General of the Federal Tax Authority, Khaled Ali Al Bustani, stressed that the launch of the "Virtual Market for Software Interfaces" is an important step in enhancing the digital transformation process pursued by the UAE at rapid rates in all sectors.

He added that the "market" platform through the government services application programming interface "API" will contribute to enhancing the efficiency of services provided by government agencies, to achieve more ease, speed and efficiency in performance, noting that "Federal Taxes" has been keen since its establishment to provide an advanced digital infrastructure, And providing all its services through an integrated electronic system without paperwork.

The General Inspector of the Ministry of Interior and Chairman of the Higher Committee for the Development of Judicial Electronic Systems in the Ministry, Major General Dr. Ahmed Nasser Al Raisi, said that the launch of the virtual market for software interfaces confirms the importance of partnership and cooperation between the government sector and innovative companies, and coordinating efforts aimed at simplifying business procedures, and unifying the experience of customers as an integrated digital interface. for services.

He added that this platform will facilitate business and e-commerce procedures, and will be a qualitative leap towards building a new generation of future services, and will effectively contribute to achieving the state's vision in providing the best government services, and launching creative initiatives and innovative projects, in line with the policies, directions and plans it adopts. our leadership.

Al Khaili: The UAE is the best in providing government services

The Director General of the Federal Authority for Identity, Citizenship, Customs and Ports Security, Major General Suhail Al Khaili, confirmed that the UAE government is working to achieve the leadership's visions and directions for the next fifty years, to become the best country in providing government services.

He added: "In order to achieve this vision, the authority is working to launch a set of its vital services through (the virtual market platform for software interfaces), such as the Emirates ID card services for all customers, both citizens and residents, in addition to passport services for citizens, to provide the opportunity for programmers and private companies to provide these services. services through its platforms, to facilitate its procedures, and provide a seamless government services experience.”

The head of government services in the UAE government, Mohammed bin Taliah, said that the launch of the (Virtual Market for Software Interfaces) represents an initiative aimed at strengthening cooperation and partnerships between government agencies, and between the government and the private sector, to provide interconnected digital services that are easy, fast and available to the customer around the clock, as well as Facilitating the provision of data and information digitally in a safe and reliable manner, and translates the directions of the UAE government to focus on building effective partnerships with society, the private sector and innovators, to provide advanced services.