Consumers in Abu Dhabi reported that several shops offered offers and early price reductions, at rates of up to 75%, on a wide range of goods and products on the occasion of the celebrations of the 50th National Day of the UAE. 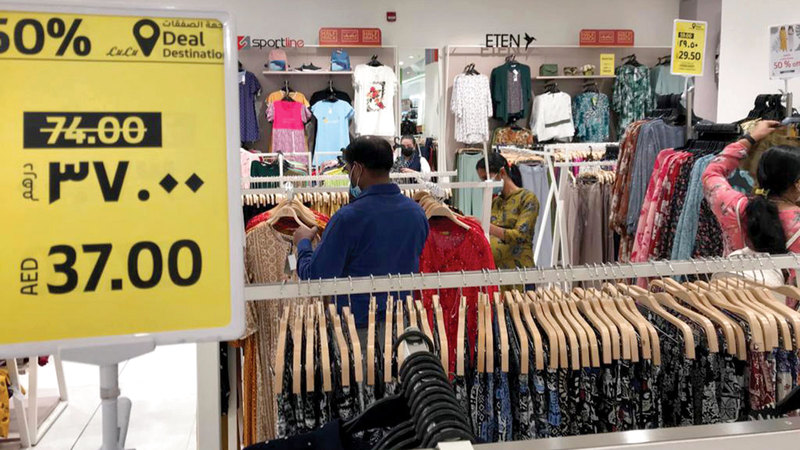 Discounts of up to 75%..and cashback..and sale at half price

Consumers in Abu Dhabi reported that several shops offered offers and early price reductions, with rates of up to 75%, on a wide range of goods and products on the occasion of the celebrations of the 50th National Day of the UAE.

They explained to "Emirates Today" that the discounts include various goods, including clothes, bags, shoes and electronics, in addition to furniture and household items.

A tour of "Emirates Today" showed that the offers, which will last until the fourth of next December, also included, in addition to direct discounts, cashback offers of up to 50% in the event of spending certain amounts, starting from 50 dirhams or more, in addition to half-sale offers. Price, buy one product and get the second for free, or buy two products and get the third for free.

The tour also showed that restaurants and cafes offered discounts of up to 50% on some of their products, in addition to the companies offering various goods with a new cover, reflecting the 50th National Day of the country.

In detail, the consumer, Ahmed Abdel Qader, said that many stores in Abu Dhabi started early discounts on the occasion of the country’s National Day, with rates reaching 75%, as well as special offers for cash back by 50% in the event of spending 50 dirhams or more on purchases.

He explained that the discounts and offers include many commodities, most notably clothes, bags, phones and their accessories, electronics and others, calling for tighter oversight to verify the validity of the discounts, and imposing strict penalties on violators.

And the consumer, Maryam Abdullah, said that shops have already started offering price reductions at different rates, most notably 50% or half-price reductions, in the context of the celebrations of the 50th National Day of the state, indicating that there are also offers related to cash recovery, and buy one commodity and get another for free. Or buy two and get the third free.

She added that the discounts and offers include many goods, most notably clothes, furniture, decoration, shoes, household items, children's toys, cosmetics, etc., calling on the concerned authorities to tighten control to verify the validity of the discounts and their proportions, and to impose strict penalties on violators.

The consumer, Amjad Samir, stated that in addition to the discounts of shops in Abu Dhabi, which ranged between 20 and 75%, a number of restaurants and cafes also joined in offering discounts of up to 50% on some of their products.

He added that companies presented their products with new covers, painted in golden color and the UAE flag, with prizes being offered in the event of entering into raffles.

For his part, an official in one of the major commercial centers in Abu Dhabi (ME), said that the reduction campaigns started early in the emirate, in cooperation and coordination with the Department of Tourism and Culture and the Department of Economic Development, noting that the reductions will continue until the fourth of next December, with opportunities To extend it for the shops participating in the solution so desired.

He added that the departments of the centers provide special facilities for shops, to quickly obtain licenses for discounts, pointing out that the coming period will witness the joining of more shops, after obtaining the necessary licenses.

In turn, the sales official in one of the chains of commercial stores in Abu Dhabi, Rina Chu, said that there is a great demand from stores to participate in the 50th National Day sale, especially since the National Day season has become one of the most important annual shopping seasons in Abu Dhabi.

Retail trade expert Davey Nagpal said that the National Day and the accompanying holiday have become a major season for shopping, especially that a large number of stores are keen to participate in it, in addition to that it lasts for a long period of up to two weeks during the current year.