LPR "Stay in Place" for 19 consecutive months: 3.85% for 1-year periods: 4.65% for 5-year periods or more   China-Singapore Jingwei, November 22. According to the news on the China Foreign Exchange Trading Center’s website on the 22nd, the People’s Bank of China authorized the National Interbank Funding Center to announce that on November 22, 2021, the loan market quoted interest rate (LPR) is: 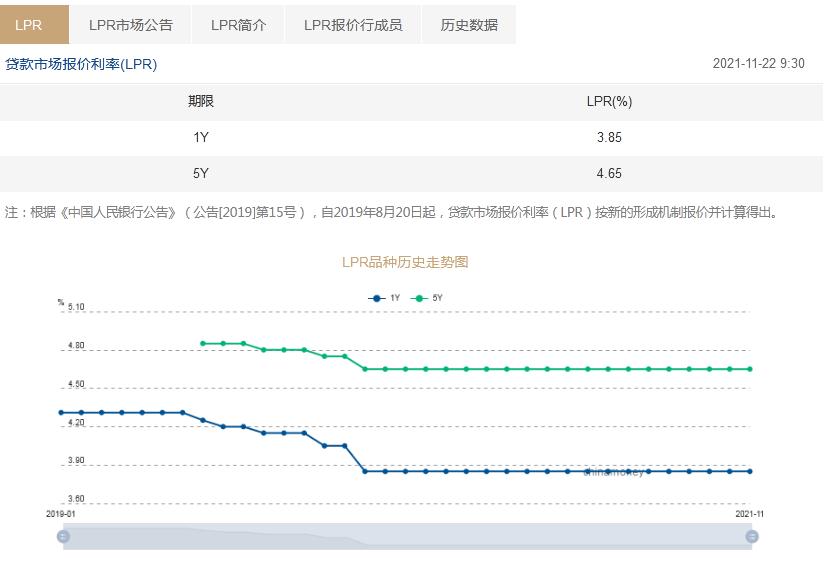 China-Singapore Jingwei, November 22. According to the news on the China Foreign Exchange Trading Center’s website on the 22nd, the People’s Bank of China authorized the National Interbank Funding Center to announce that on November 22, 2021, the loan market quoted interest rate (LPR) is: 1-year LPR is 3.85%, LPR over 5 years is 4.65%.

The above LPR is valid until the next LPR is issued.

LPR has "stayed in place" for 19 consecutive months

On the same day, the central bank announced that in order to maintain a reasonable and sufficient liquidity in the banking system, on November 22, 2021, the People's Bank of China launched a 50 billion yuan reverse repurchase operation by way of interest rate bidding.

A week ago, the central bank "equal parity" renewed the medium-term lending facility (MLF), and some institutions expect the LPR to remain stable in November.

On November 15, in order to maintain reasonable and sufficient liquidity in the banking system, the central bank carried out a 100 billion yuan MLF operation (including the renewal of the two MLF maturities on November 16 and 30) and a 10 billion yuan reverse repurchase operation. Meet the needs of financial institutions.

Among them, the MLF operating interest rate is 2.95%, which continues to remain unchanged.

At that time, Oriental Jincheng analyzed that the 1-year MLF operating interest rate was the reference basis for 1-year LPR quotations.

Since September 2019, the two have been adjusted simultaneously, and the spread is fixed at 90 basis points.

The MLF interest rate did not change in November, which means that the basis of the LPR quotation in the current month has not changed.

Taking into account the recent changes in the bank's marginal cost of funds and the trend of the credit market, the LPR quotation in November may continue to remain unchanged.

Under the background of the lack of RRR cuts and interest rate cuts, stable inter-bank liquidity, and no significant decline in debt-side costs, asymmetric LPR rate cuts will compress banks’ net interest margins. In an environment where economic expectations are relatively pessimistic, banks are not willing to increase credit In terms of investment intensity, the effect of lowering LPR may be very limited, and banks have no incentive to lower LPR proactively.

It is worth noting that Oriental Jincheng reminded that, considering that the one-year LPR price reduction momentum is accumulating after the central bank’s RRR cut in July,

if the central bank implements the RRR

again before the end of the year, the reduction will not be scheduled while the MLF interest rate remains unchanged. The possibility of one-year LPR quotes being lowered separately-The RRR cut in September 2019 led to a separate lowering of the 1-year LPR quotes.

On November 12, the latest one-year LPR interest rate swap (IRS) was 3.8749%, which was about 9 basis points lower than before the RRR cut in July, and was approaching the current value level (3.85%). The expectation of LPR downgrade is increasing.