A few days ago, Xu Zhilei, an academician of the Chinese Academy of Engineering and a weapon expert, was a guest on Douyin's "Science Innovation China · Academician Lecture" column, sharing ideas and opinions related to innovative design to netizens in the form of short videos. The academician, who is over 90 years old, said that his "worry" is that he has too little contact with new things. 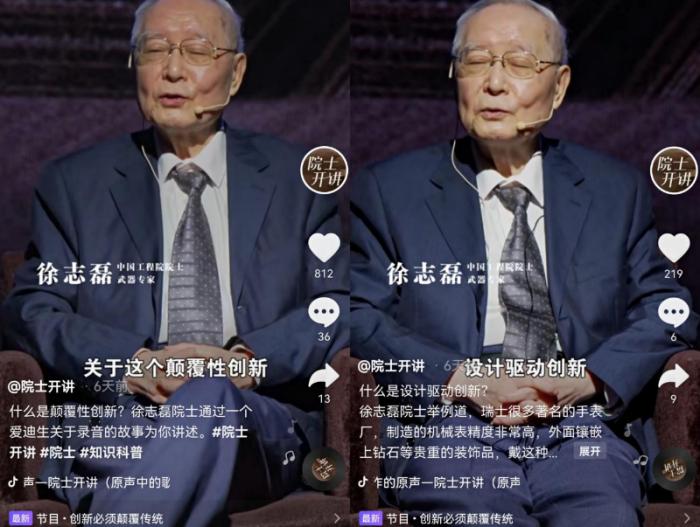 A few days ago, Xu Zhilei, an academician of the Chinese Academy of Engineering and a weapon expert, was a guest on Douyin's "Science Innovation China · Academician Lecture" column, sharing ideas and opinions related to innovative design to netizens in the form of short videos.

The academician, who is over 90 years old, said that his "worry" is that he has too little contact with new things.

Academician Xu Zhilei is 92 years old this year. He has been involved in the work of "Two Bombs and One Star" since 1963. He has a glorious past and honors.

He believes that innovation is to subvert tradition. This kind of "subversion" lies not only in the replacement of technology, but also in "emphasizing the value of people."

Within a week, this sharing has been played online more than 5 million times and won more than 200,000 likes.

In the sharing, Xu Zhilei first started from the story of Edison inventing the electric light bulb, explaining the difference between creativity, technological invention and innovative design.

He said that Edison wanted to turn a gas lamp into an electric light, "using electricity to illuminate is an idea."

Then came the technological invention process. After experimenting with more than 600 kinds of fibers, Edison successfully found tungsten filaments, extending the filament life to 1,200 hours.

Third, to make the product a business, a power supply system is also needed.

In 1880, Edison established the Edison Lighting Company in New York, and successfully found 50,000 users, and finally realized the power system to replace the gas lamp.

In Xu Zhilei's view, creativity is a separate idea, and invention is a concrete creation.

Edison invented the electric light bulb and promoted the birth of the electric power system, "subverting" the gas lamp system, which is what we call "disruptive" innovation.

The same process also appeared in another invention, "recording."

Xu Zhilei introduced that Edison was originally on a bakelite disc and used a vibrating sensor to run on the track to produce sound, which later evolved into a bakelite record.

Bakelite records have been popular for a long time, and there are many precious music, operas, songs, etc., which are used to record.

Later, wire recorders, tape recording, laser discs, and recording software came out one after another.

The faster the high-speed rail, the more security is a problem.

Therefore, my country has established a complete safety monitoring system on a single high-speed railway, and deployed more than 2500 monitoring points. Sensors are used to monitor the operating status, temperature and other parameters of each part of the train to ensure safety.

In addition to sharing his professional field, Xu Zhilei also talked about his life and work status after retirement in the column of "Academician Talk".

Although he is over ninety years old, Xu Zhilei still has his own "worries"-he feels that he has "too little understanding" of the outside world.

He often said to people around him, “Don’t always think that I am old and have something new. Tell me more and talk to me about innovation.”

He believes that everyone should always go forward instead of lying down when it comes to academicians.

Therefore, at the age of 92, he still maintains a high degree of enthusiasm for work.

And his secret to maintaining enthusiasm is to ensure that he eats well and sleeps well in his daily life.

It is understood that the column "Academician's Talk" is jointly produced by "Technology China" created by the China Association for Science and Technology and Douyin.

Academician Xu Zhilei's sharing is the second phase of the column.

Prior to this, the first program "Innovative Design Achieves the Fastest Chariot" brought by Mao Ming, an academician of the Chinese Academy of Sciences and weapons expert, was launched on October 26.

In the future, the column will be published on Douyin and other platforms at a frequency of two issues a month. Users can search for "Academician Talk" on Douyin to watch the column.