The Ministry of Agriculture and Rural Affairs responds to the recent panic buying of grain, oil, rice and noodles in some areas

China News Service, November 4th. In response to the recent panic buying of grain, oil, rice and noodles in some areas, Liu Lihua, deputy director of the Planting Management Department of the Ministry of Agriculture and Rural Affairs, responded on the 4th, saying that our country’s grain production is abundant and stocks are sufficient, even in the country last year. When the epidemic was at its 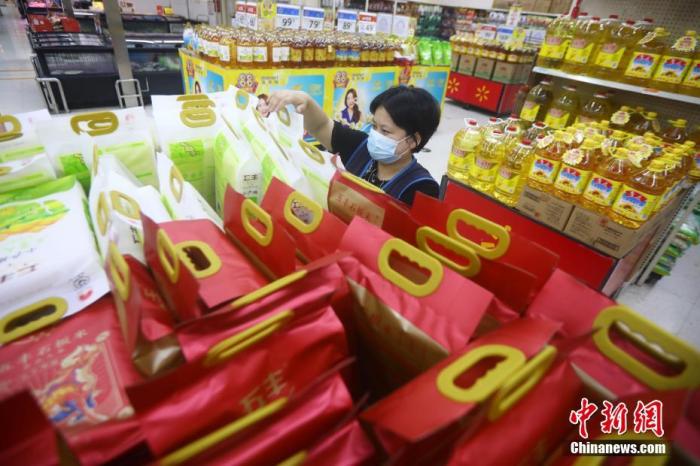 China News Service, November 4th. In response to the recent panic buying of grain, oil, rice and noodles in some areas, Liu Lihua, deputy director of the Planting Management Department of the Ministry of Agriculture and Rural Affairs, responded on the 4th, saying that our country’s grain production is abundant and stocks are sufficient, even in the country last year. When the epidemic was at its worst, the food varieties in the supermarket were also abundant in supply. The common people had no worries about rice and noodles at home. It can be said that you can buy whatever you want, and you can buy whatever you want. The basis for ensuring supply and stable prices is very good. firm.

At the press conference of the Ministry of Agriculture and Rural Affairs held on the afternoon of the 4th, a reporter asked: The executive meeting of the State Council on November 2 pointed out that in order to stabilize grain production, grain output should be maintained at more than 1.3 trillion catties. What is the current situation of the autumn grain harvest? What kind of influence did the continuous rainy weather in the early stage have on the autumn and winter planting?

In addition, there has been a recent panic buying of grain, oil, rice and noodles in some areas. How does the Ministry of Agriculture and Rural Affairs respond to this?

Liu Lihua responded that your question can be summarized in two aspects.

First, how is the guaranteed supply of grain production this year?

Second, how is the start of grain production next year.

First, regarding the situation of food production guarantee this year.

At present, the national autumn grain harvest has exceeded 90%. Judging from the actual harvest, although Henan, Shanxi, and Shaanxi have reduced the output of autumn grain due to severe floods and droughts, most of the other main producing areas have increased production, especially in the Northeast. The increase in production is relatively large.

Still the same sentence, the country has increased and decreased, and the increase is more than the decrease. If you calculate the general ledger, the increase in autumn grain production across the country is a foregone conclusion.

This year's grain output will hit a record high, stabilizing at more than 1.3 trillion catties for seven consecutive years.

Year after year bumper harvests, abundant stocks, and no problems with supply.

Let me report to you a few more aspects:

First, the output of rice and wheat has been increased, and the rations are absolutely guaranteed.

Our country’s two major ration crops of rice and wheat have increased production year after year. In the past few years, basically, the output exceeded demand or the production demand had a slight surplus. This year’s rice output will continue to increase steadily. This year’s output has hit a record high. The output is higher than the consumption of food. Coupled with the abundant inventory of the two major rations, it has also imported some modified varieties. In this way, the supply of the two major rations is absolutely guaranteed.

Second, the corn output has increased significantly, which can effectively increase market supply.

Corn is the largest food crop in our country. It is also a high-yield crop and an important feed grain.

This year’s corn area has increased by more than 20 million mu. The northeast’s main producing areas have a better matching of light, temperature and water, and the yield has increased. The national corn output has increased more. Together with imports and stocks, it can meet the needs of domestic consumption, and the supply is tight. The situation will improve.

Third, the current total grain stocks are abundant and are at a historical high.

Yesterday the State Bureau of Grain and Material Reserves also said that the two major rations of wheat and rice accounted for more than 70% of the total inventory. For example, wheat inventory can meet consumer demand for one and a half years.

At the same time, our country's grain and oil processing capacity is also very strong, and the rice noodles processed in one day are enough for the people of the whole country to eat for two days.

Liu Lihua said, in short, our country has ample grain production and sufficient stocks. Even when the domestic new crown epidemic was the most severe last year, there was ample supply of food in supermarkets. The people at home are worried about rice and noodles. You can buy it whenever you want. When you buy it, you can buy what you want, and the foundation for ensuring supply and price stability is very solid.

Second, about the start of next year's grain production.

Planting in autumn and winter is the first battle of grain production in the coming year. We often say that summer grain is harvested and we take the initiative throughout the year.

When the wheat is planted in autumn and winter, the summer grain harvest will have a foundation.

The continuous rainfall from September to early October of this year caused the soil to be too wet in parts of the northern winter wheat area, making it difficult to stubble and prepare the ground, and wheat planting was blocked.

However, after mid-October, the weather in most of the winter wheat areas turned fine, and many unconventional measures were taken to rush to harvest autumn crops and winter wheat. The planting progress was significantly accelerated.

As of November 3, 83% of the country’s wheat has been sown, and the progress is slightly slower than normal by 3.4 percentage points, but the slowness has narrowed by 25 percentage points compared with the slowest period in the previous period.

Among them, Hebei, Shandong, Henan, Shaanxi, and Shanxi, which are more affected by the autumn rains, have planted more than 14 million mu per day during the peak period. At present, 94% of the wheat has been planted, and it has entered the stage of autumn planting. The progress is better than our previous expected.

Liu Lihua pointed out that the main problem at present is that the proportion of late sowing wheat this year is relatively large.

However, experts say that the growth period of winter wheat is relatively long, with a full growth period of more than 230 days, with a relatively large leeway. In the past, there were also times when the sowing date was postponed. As long as the sowing is continued before winter, management measures should keep up after the beginning of spring and increase water and fertilizer input. There is hope for increasing pest control and reaping a bumper harvest.

Liu Lihua said that in the next step, the Ministry of Agriculture and Rural Affairs will follow the decisions and deployments of the Party Central Committee and the State Council, with the attitude of fighting against the water, with the greatest determination and strength, tightly linked, precise guidance, and will not relax the current wheat production.

The second is to do a good job of field management before winter to prevent freezing damage and pests, diseases, and weeds to ensure the safe overwintering of wheat.

The third is to plan early next year's wheat field management in the early spring of next year, early application of wheat tillering fertilizer to promote weak wheat seedlings to grow stronger, and lay the foundation for a bumper summer grain harvest next year.