Yesterday, Union Coop announced the launch of new initiatives on the occasion of the celebrations of the fiftieth year and the golden jubilee of the founding of the state, explaining that the initiatives include allocating 50 million dirhams to reduce the prices of 20,000 food and consumer goods by rates exceeding 50% and for a period of 100 days. 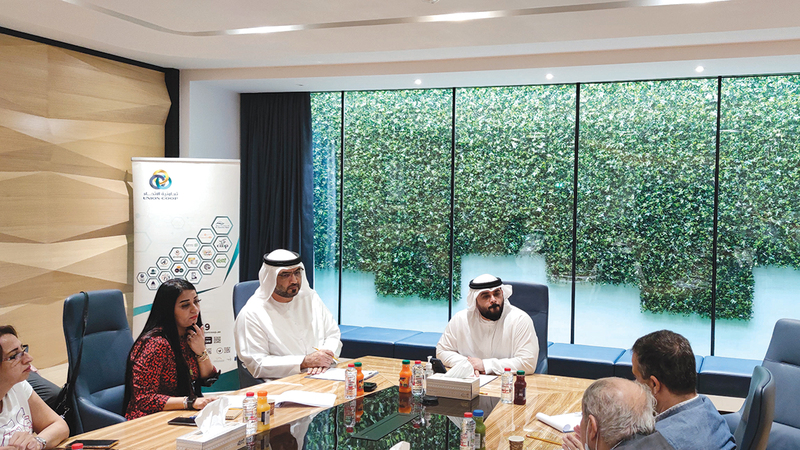 During the press conference held by the cooperative to reveal the offers.

The Union Coop announced yesterday the launch of new initiatives on the occasion of the celebrations of the fiftieth year and the golden jubilee of the founding of the state, explaining that the initiatives include allocating 50 million dirhams to reduce the prices of 20,000 food and consumer goods by rates exceeding 50% for a period of 100 days.

During a press conference to reveal the initiatives, Coop CEO Khalid Humaid bin Dhiban Al Falasi said that the new discount offers will be launched on the tenth of this month, with raffles on daily prizes that include 50 winners of smart phones, 50 winners of gold bars, in addition to 50,000 points. Distinguished, 50 mountain bikes, in addition to an initiative dedicated to those born in 1971 by giving them a “best” purchase card with an amount of up to 500 dirhams for free shopping, in addition to raffles and other prizes allocated to shoppers through the Tawuniya smart store.

He added that the initiatives also include discounts of up to 50% on more than a thousand items on the cooperative e-commerce platform, in addition to an initiative related to providing free delivery of all orders that will be ordered through the smart store during the National Day of the State.

Al Falasi indicated that the offers include basic food and consumer goods, most notably rice, meat, poultry, canned food, vegetables, fruits and other products, pointing out that the promotional campaigns take into account the diversity and cultural and population diversity in the country, so as to meet the needs of all communities.

Al-Falasi stated that the cooperative will release, with the discount offers, data for consumers showing the quantities of goods available for each of those included in the discounts, which will provide clearer criteria for the available discounts for all goods in warehouses.

He stressed that the cooperative contracts with suppliers, approved agents and owners of approved agencies for products within strict conditions and procedures, pointing out that the health certificates of products are checked daily, in addition to certificates of origin, customs and regulatory authorities in the country or abroad.

The CEO of Union Coop, Khalid Humaid bin Dhiban Al Falasi, said that the cooperative is preparing to launch a commercial and residential complex that will be managed by Umm Al Quwain Society during the beginning of next year, at an investment cost of 50 million dirhams.

He added that the new complex in Umm Al Quwain will be built according to modern advanced concepts for the retail trade sector, noting that the localization rates in it will reach 30% when it is launched.