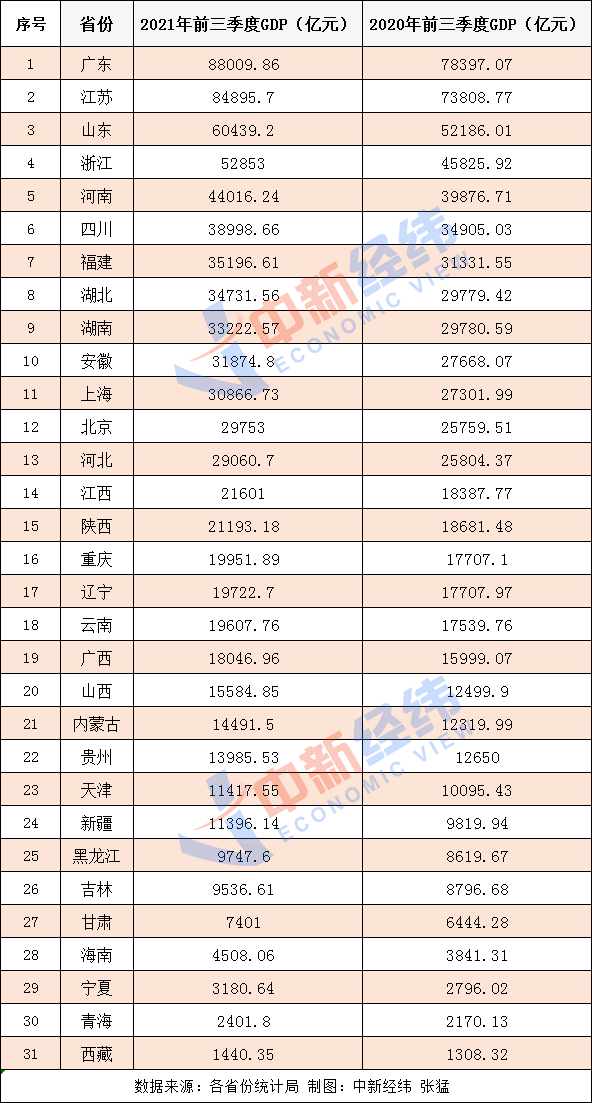 So far, 31 provinces' "report cards" for the first three quarters of 2021 have all been released.

Observations found that although the names of the top ten provinces have not changed, in the first three quarters of 2021, Hubei's GDP exceeded Hunan and ranked eighth.

Specifically, in the first three quarters of 2021, the GDP of Guangdong and Jiangsu exceeded RMB 8 trillion for the first time, making them the “8 trillion club”.

The economic aggregates of Shandong, Zhejiang, and Henan have all increased further, exceeding RMB 6 trillion, RMB 5 trillion, and RMB 4 trillion for the first time, respectively.

Guangdong and Jiangsu are firmly on the top and second place, with GDP in the first three quarters of 880.986 billion yuan and 848.957 billion yuan respectively.

It is worth noting that, comparing the data for the same period in 2020, it is found that the gap between Guangdong and Jiangsu's economic aggregates has decreased.

In an interview with China-Singapore Jingwei reporters, Su Jian, director of the National Economic Research Center of Peking University, pointed out that Guangdong and Jiangsu have always been in the first echelon of China's economic aggregate.

In the context of normalized epidemic prevention and control, the eastern coastal economic provinces have performed well in terms of recovery and development, while other provinces pose little threat to Guangdong and Jiangsu.

Speaking of the narrowing of the total GDP gap between Jiangsu and Guangdong in the first three quarters, Su Jian believes that Jiangsu's regional economic development is relatively balanced, the manufacturing industry is strong, and the development is rapid.

Relying on the Yangtze River Delta city circle, Jiangsu has strengthened its industrial complementarity with Shanghai and Zhejiang. Its industrial structure has been upgraded rapidly and its economy has achieved steady growth.

The growth rate of 10 provinces outperformed the whole country

According to data from the National Bureau of Statistics, preliminary calculations show that the GDP of the first three quarters was 8,23131 billion yuan, a year-on-year increase of 9.8% at comparable prices, and an average growth of 5.2% over the two years.

From the perspective of GDP growth rate, among the 31 provinces, the GDP growth rate of Hubei, Hainan, Beijing, Zhejiang, Shanxi, Jiangsu, Anhui, Jiangxi, Shandong, Chongqing and other 10 provinces in the first three quarters exceeded the national growth rate. The country is flat.

Su Jian pointed out that in the first three quarters of this year, Hubei's annual GDP growth rate ranked first, mainly due to the severe impact of the epidemic in 2020 and a relatively low base.

Hainan has benefited from the continuous release of policy dividends from the Hainan Free Trade Port and the strong support of the tax-free economy for consumption.

Beijing mainly relies on key industries and the new economy to focus its efforts. Beijing’s industrial production has maintained rapid growth, and the value added of industries above designated size has increased by 38.7% year-on-year.

It is worth noting that in the first three quarters, Henan Province, which ranked among the top five in terms of GDP, was close to the inverse in terms of growth rate.

In this regard, the Henan Provincial Bureau of Statistics explained that since the third quarter, factors such as severe floods and the new crown pneumonia epidemic have had a greater impact on the economy. The province’s economic operation has encountered unprecedented severe challenges and tests, and it has been gradually affected by the base of the previous year. As a result, the growth rate of main indicators has declined to varying degrees.

According to the Henan Provincial Statistics Bureau, whether it is a flood or an epidemic, the impact on economic operations is short-term and external. The comparative advantages accumulated over the long term remain unchanged, the long-term economic trend remains unchanged, and the development resilience, motivation, and vitality Still strong.