Who does "Li Ziqi" belong to? Li Ziqi and the major shareholders in court

China News Service, Beijing, October 28 (Zuo Yuqing) From July 14 to now, Li Ziqi's account has fallen into silence after updating his "Chai Rice, Oil, Salt, Sauce, Vinegar and Tea".   "Why did Li Ziqi stop changing for so long?" Outsiders have speculated on this, and many of them believe that Li Ziqi has a disagreement with Hangzhou Weinian Brand Management Co., Ltd., which he cooperated with. 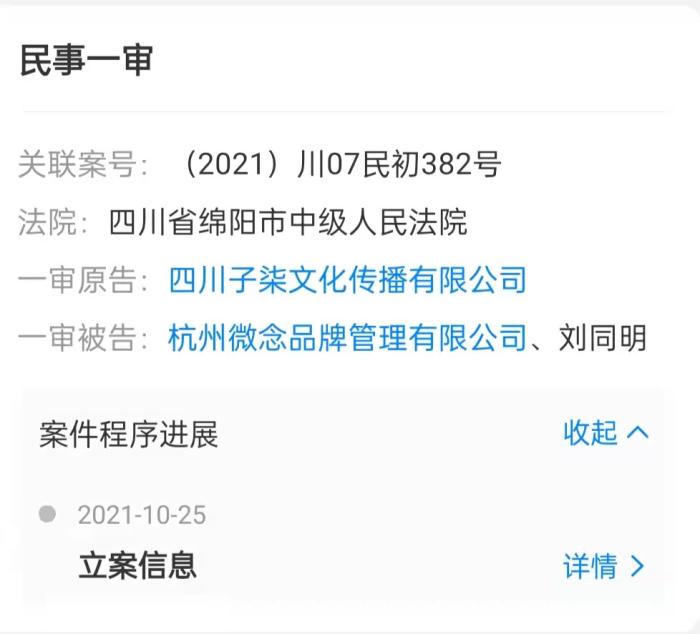 "Why did Li Ziqi stop changing for so long?" Outsiders have speculated on this, and many of them believe that Li Ziqi has a disagreement with Hangzhou Weinian Brand Management Co., Ltd., which he cooperated with.

At this time, it has been 3 months since Li Ziqi stopped.

The capital behind "poetic"

What role did Hangzhou Weinian play in Li Ziqi's activities?

For most people who are immersed in Li Ziqi's pastoral life, the capital behind the "poetry" seems very strange.

Li Ziqi, formerly known as Li Jiajia, has been shooting short videos on food themes since 2015.

In September 2016, the two parties began to cooperate; in November of that year, Li Ziqi entered Weibo and became popular on Weibo with the short video "Lanzhou Beef Noodle".

The rapid development of Li Ziqi's brand started from this. Not only did she become the top-stream IP for short videos in China, she was also welcomed overseas.

But the "curse" of contradiction is also caused by this.

"Li Ziqi" does not belong to Li Ziqi

Although Hangzhou Wei Nian also confirmed that Li Ziqi’s filming team has no more than four people so far, and the video content and shooting are still dominated by Ziqi himself.

But for the "Li Ziqi" brand, its actual operation is controlled by a company. This company is not the "Ziqi Culture" of Li Ziqi Holdings, but its major shareholder Hangzhou Weinian.

Take the popular Li Ziqi Liuzhou snail noodles as an example. The packaging of the product clearly states that the consignor of the product is Hangzhou Weinian, not "Ziqi Culture."

Chinanews.com noticed that according to Tianyan Check, "Ziqi Culture" did not have any foreign investment, but Hangzhou Weinian had financed two snail powder production companies, and there was no Li Ziqi among the shareholders of these two companies.

The screenshot is from Li Ziqi's Weibo.

After Li Ziqi became the top IP on the short video track, financing from major investors was also invested in Hangzhou Weinian.

There is no doubt that what these capitals favor is not Hangzhou Weinian itself, but the "Li Ziqi" brand it masters.

So, how much does Li Ziqi benefit from?

"Li Ziqi's income is mainly from YouTube abroad, such as post ads; domestically, it is mainly e-commerce." An industry insider told Chinanews.com.

The fact is that there is no name of Li Jiajia (Li Ziqi) in the shareholder information of Hangzhou Weinian.

This also means that Li Ziqi has no right to speak in the company operating the "Li Ziqi" brand.

Even related brand trademarks such as "Li Ziqi", "Ziqi" and "Qi" are registered by Hangzhou Weinian, not Li Ziqi himself.

The relationship between "Li Ziqi" and Li Jiajia may only be the founder.

After the dispute can "leisurely to see the mountain

Although there has never been an official voice, there have been many rumors about the equity dispute between Li Ziqi and Hangzhou Weinian.

On August 30th, Li Ziqi posted a dynamic in Oasis: "Report to the police early in the morning." In the comments, he replied to netizens that "capital is really a good method" (this comment has now been deleted).

On September 13, his assistant stated on Weibo that Li Ziqi had recently been sorting out problems between the company and third-party companies.

On the WeChat public account of Hangzhou Weinian, there has been no publicity about Li Ziqi since August.

Now, behind the complaint, many netizens are worried: "Can I see Li Ziqi again in the future?"

On October 22, Li Ziqi, who had been on duty for three months, walked into CCTV and talked about her plans for future life. She said that she hoped to help rural revitalization and the spread of intangible cultural heritage. Be an internet celebrity".

And under Li Ziqi's top Weibo, many netizens left messages expressing their support for Li Ziqi.

On October 27, it was reported that Hangzhou Weinian’s shareholder Bytedance had started the exit process on October 16, and the investment was less than half a year.

According to a person close to the transaction, ByteDance originally invested in Hangzhou Weinian mainly because it was optimistic about Li Ziqi.

Now that Li Ziqi and Hangzhou Weinian are in disagreement, Bytedance decided to withdraw.