Vegetables are a bit expensive these days! Industry: Production capacity recovery prices have begun to fall

Since October, vegetable prices everywhere have entered an "rising mode", which has aroused the attention of countless citizens. On October 26, the reporter visited some farmer's markets and supermarkets in Weifang and found that vegetables in the range of 5 yuan occupy the absolute mainstream of the market, and the price of spinach has exceeded the 7 yuan mark. It is understood that the continu 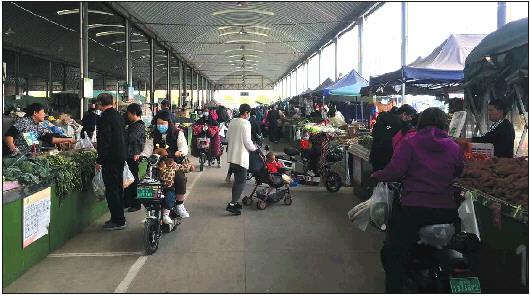 Since October, vegetable prices everywhere have entered an "rising mode", which has aroused the attention of countless citizens.

On October 26, the reporter visited some farmer's markets and supermarkets in Weifang and found that vegetables in the range of 5 yuan occupy the absolute mainstream of the market, and the price of spinach has exceeded the 7 yuan mark.

It is understood that the continuous rainy days at the end of September and early October were the main reason for this round of vegetable price increases.

On October 26, citizens were buying vegetables at a farmer’s market in Weifang.

How expensive are the dishes?

At least double that of the same period in previous years

"Spinach has risen to 7 yuan a catty. In the past, this price could buy three catties and still have surplus." At the Shijia Farmers Market in Weifang High-tech Zone, Ms. Zhao who wanted to buy some spinach asked about the price and chose to give up. "Recently, the price of this dish is getting more and more expensive, and it changes every day."

The stall owner Lao Fang told reporters that since the end of September, the prices of various vegetables have started to increase.

Then the reporter went to the vegetable area of ​​a large supermarket on Xinhua Road in Weifang. The price of most of the vegetables in the market was above 4 yuan.

In the past month, the rising vegetable prices have caused many citizens to call "unbearable".

Citizen Mr. Wang lives in the Nanhu community. Every few days he goes to this supermarket on Xinhua Road to purchase. This time he bought a few potatoes and a cabbage. "Now the prices of potatoes and cabbage are slightly cheaper. The price of green leafy vegetables is very expensive. I feel that the money for buying vegetables this month is a lot more than in the past."

Why the price of vegetables continues to rise

Continuous rain in the previous period is the main cause

What caused the continuous increase in vegetable prices this time?

What is the trend of vegetable prices in the future?

With these questions, the reporter went to Shouguang, Weifang, the largest "vegetable basket" in Jiangbei, to explore the secrets behind this round of price increases.

In an agricultural cooperative in Jitai Town, Shouguang City, the person in charge, Meng Lingxin, is organizing everyone to pack the eggplants and peppers that have just been picked.

Lao Meng’s cooperative mainly grows eggplants, cucumbers and other eggplants. He was deeply touched by the price increase. “In previous years, when the price was the lowest at this time, the wholesale price of eggplants was at most 1 yuan/jin. It’s almost November this year, and it can actually sell for more than 3 yuan."

What are the reasons for the high prices of vegetables?

Lao Meng said that the continuous rainy weather in the early period was one of the main reasons for the "surging" of the price of vegetables in this round. The continuous rain on cloudy days caused the fruit set of solanaceous fruit crops to be generally affected. The eggplants in our greenhouse started to go on the market at the end of September of the previous year, but this year due to continuous rain, the crop production was reduced, and the time to market was also delayed by nearly a month, so the price was also higher than in previous years. few."

In China Shouguang Agricultural Products Logistics Park, He Xiaojie, a price index analyst, is conducting statistical analysis on the trading prices of vegetables that day.

She told reporters that since the end of September and the beginning of October, many leafy vegetables grown in the open air suffered waterlogging disasters, rotten roots and stems, resulting in a significant reduction in production; although solanaceous vegetables grown in greenhouses suffered Waterlogging disasters are minor, but continuous cloudy days have led to unsatisfactory fruit setting, which is also one of the reasons for the increase in vegetable prices.

This point is consistent with Meng Lingxin's analysis.

In addition, since the beginning of this year, the prices of seeds, fertilizers, pesticides, etc. have generally risen, driving up the cost of vegetable cultivation; international oil prices have recently hit a record high in the past seven years. In September, domestic gasoline and diesel prices rose by 23.4% and 25.7%, respectively, driving an increase in transportation costs. And so on, also boosted the price of vegetables.

He Xiaojie told reporters, "The original 6.8-meter car made a trip to Shanghai, and the price was between 2,800 yuan and 3,200 yuan. The current price has generally risen by about 500 yuan over the past."

When will the price of vegetables drop

As the prices of leafy vegetables and solanaceous vegetables remain high, vegetables such as cabbage, potatoes, and onions that are resistant to transportation and easy to store have gradually become new choices for many citizens.

"According to our statistics, this year's sales of potatoes, onions, and cabbage are much higher than in previous years. Because these vegetables are relatively cheap and easy to store, they are very popular with consumers." He Xiaojie said.

When will the rising vegetable prices last?

He Xiaojie said that according to the overall situation of the current market, the price of vegetables will gradually stabilize in early November.