Chinanews client, Beijing, October 28 (Reporter Zhang Xu) A few years ago, I am afraid that no one would have thought that the world's first car company to exceed a trillion dollars in market value was not General Volkswagen, but Tesla. On October 25th, Tesla became the first auto company with a market value of over one trillion US dollars. Trillion dollar market value, Musk: crazy   The mark 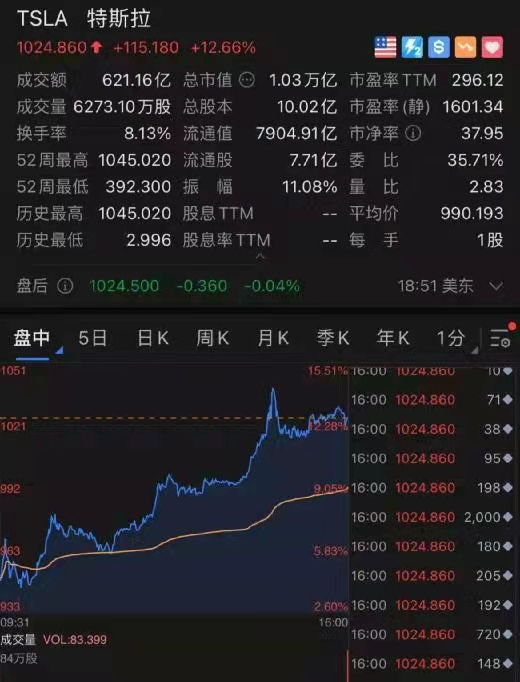 Chinanews client, Beijing, October 28 (Reporter Zhang Xu) A few years ago, I am afraid that no one would have thought that the world's first car company to exceed a trillion dollars in market value was not General Volkswagen, but Tesla.

On October 25th, Tesla became the first auto company with a market value of over one trillion US dollars.

This means that Tesla has become a new member of the trillion-dollar club after Apple, Amazon, Google and Microsoft.

At the same time, Tesla's market value has surpassed the sum of 11 established auto companies such as Toyota, Volkswagen, and General Motors.

After all, Musk’s net assets are linked to Tesla’s stocks and options, and his personal wealth soars by US$36 billion a day to nearly US$289 billion, making him the richest man in the world.

Musk sent a message with emotion.

On October 25th, as one of the largest car rental companies in the United States, Hertz announced that it will purchase 100,000 electric vehicles Tesla Model 3 from Tesla before the end of 2022, with a total value of up to 4.2 billion US dollars.

Why did one order push Tesla into the $1 trillion club?

This is a record order, which directly locks in about 10% of Tesla's annual production capacity, and also created the largest single transaction in the history of electric vehicles.

Zhang Xiang, a researcher at the Automotive Innovation Center of North China University of Technology, told Chinanews.com that car leasing companies generally only purchase reliable and durable models, and Hertz is a giant in this industry. On the one hand, it has increased Tesla’s sales, on the other hand, it is also an endorsement of Tesla’s quality.

As an industry leader, Hertz's move may lead more peers to follow suit and further drive the electric vehicle market.

Tesla cannot do without China

Tesla is advancing all the way, and China has become more important to it.

In the third quarter, Tesla delivered a total of 241,300 vehicles worldwide, a year-on-year increase of 64%.

According to data from the Federation of Passengers, Tesla’s Shanghai plant delivered a total of 133,000 vehicles during the same period, accounting for 55.3% of Tesla’s deliveries.

One factory has contributed more than half of the production capacity, and its status can be said to be very important.

And this factory originally planned to produce 450,000 vehicles, its annual production capacity has exceeded 500,000 vehicles.

According to data from the Travel Federation, from January to September this year, Tesla's cumulative sales in China have exceeded 300,000 vehicles, of which more than 100,000 were exported.

In addition to production bases, China is also one of Tesla's largest markets.

The financial report shows that Tesla’s revenue in China in the first three quarters was US$9.015 billion, accounting for about 25% of Tesla’s global revenue; in the third quarter, the revenue in the Chinese market was US$3.113 billion, a year-on-year increase of 78.5%, the second only The second largest market in the United States.

Because of this, Tesla chose to continue to bet on China.

On October 25, Tesla announced that the Shanghai R&D and Innovation Center and the Shanghai Super Factory Data Center have been completed and will be put into use in the near future.

This means that Tesla has not only realized localized production in China, but also further realized research and development in China.

Tesla China said that in the future, the Shanghai R&D and Innovation Center will carry out more original development work around complete vehicles, charging equipment and energy products, and develop into a comprehensive R&D center on the same scale as the US R&D center.

Zhu Xiaotong, President of Tesla Greater China, said: “Tesla has always fulfilled its commitment to deepening the Chinese market. The completion of the R&D and Innovation Center not only promotes Tesla into a new process of localization in China, but also provides localized talents for the industry. Cultivate a paradigm to further accelerate the prosperity of China's smart car research and development system."

Can Tesla's price be lowered?

Tesla is a firm implementer of the "price for volume" strategy, relying on strict supply chain management, on the one hand to ensure profits, on the other hand to achieve rapid expansion.

The data comes from Guohai Securities.

In this regard, Tesla said that as the product sales mix continued to shift to lower-priced models, the profitability level was achieved on the basis of a 6% year-on-year decline in average selling prices in the third quarter.

Continue to reduce costs and the decline is greater than the decline in average selling prices, achieving a record high in operating profit margins.

Tesla's China R&D Center has landed, and there is a view that a low-priced Tesla model priced at $25,000 will be born here, which will help to increase Tesla's sales and gross profit margin again.

However, it is worth noting that on the one hand, major auto companies have accelerated the pace of electrification transformation, on the other hand, they have also set up R&D centers in China.

For example, traditional car companies such as Hyundai Motor and Mercedes-Benz have set up their R&D centers in China.

Industry insiders believe that with the sales volume of China's new energy vehicle market surpassing that of the European and American markets, the effects of product and technology launches in China can directly reflect the success of the transformation of auto companies.

The introduction of R&D centers in China, the formation of a Chinese team to participate in R&D and design, and the launch of corresponding models according to the preferences of Chinese consumers are the key to the competition of new energy vehicles.

Despite the rapid momentum, in an increasingly fierce market environment, Musk's goal of "achieving sales of 20 million vehicles by 2030" is still full of uncertainty.