The 2.8 billion deposits were inexplicably pledged. Who moved the depositors' money? 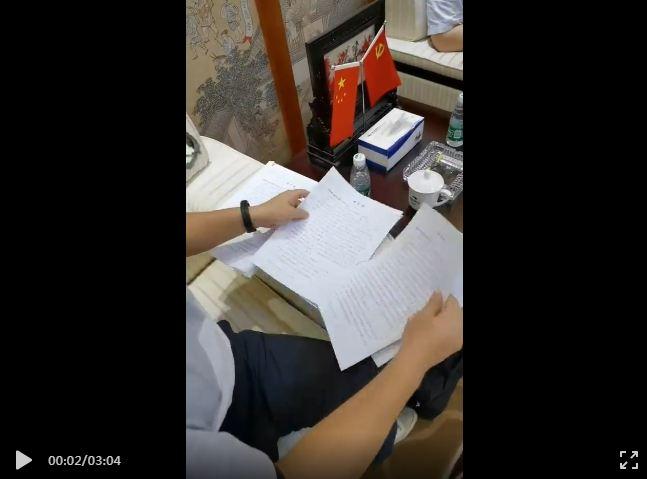 Chinanews.com, Beijing, October 26 (Zuo Yuqing) The 2.8 billion deposits in the bank are "missing"?

Recently, Jimin Trust Group discovered that 2.8 billion of its 3.3 billion deposits in Bohai Bank were used to provide loan pledge guarantees for Huaye Petrochemical without knowing it.

How did this happen?

It was a phone call from the staff of the business department of the Nanjing branch of Bohai Bank to "stoke" the whole matter out.

According to media reports, on August 19, Shanhe Pharmaceutical, a subsidiary of Jimincred Group, received a call from a staff member of the business department of the Nanjing branch of Bohai Bank.

The staff member said on the phone that someone was converting electronic deposits into paper certificates of deposit at the counter and used them to pledge 500 million yuan of deposit certificates for loans from others (ie Huaye Petrochemical).

Upon receiving this news, Jimin Credential immediately negotiated with the Nanjing Branch of Bohai Bank, stating that the company has never allowed anyone to handle deposit pledge matters and requested the bank to call the police immediately.

At this time, the two subsidiaries of Jimin Trust, Shanhe Pharmaceutical and Hang Seng Pharmaceutical, have pledged a total of 2.8 billion yuan in deposits.

Subsequently, the solution proposed by the Nanjing Branch of Bohai Bank to Jimin Credential was to allow Jimin Credible to "borrow the new and repay the old": allow the bank to continue to use Shanhe Pharmaceutical’s 500 million yuan deposit for Huaye Petrochemical Provide deposit certificate pledge for loans from Bohai Bank.

"If you don't continue to do (pledge) here, (Huaye Petrochemical) will not pay after the deadline, then our bank will pay on your behalf, and your deposit certificate will be deducted as soon as possible." On the evening of August 21, Bohai Bank Nanjing Guan Pengcheng, assistant general manager of the branch business department, said in a phone call with Jimintong that if Jimintong reports to the police, all of its 2.8 billion deposit receipts will be frozen.

In desperation, Jimin Credible reported to the Wuxi police on September 3.

Can the official seal be more than 80% similar to be confused?

In the early morning of October 24, in response to media reports, Bohai Bank issued a statement stating: "During the daily business handling with related companies, our branch found abnormal behavior among companies and has reported the case to the public security organs to seek judicial solutions in accordance with the law."

Bohai Bank classifies the pledge incident as "abnormal inter-enterprise behavior". Then, is the bank not responsible?

In the phone recording provided by Jimin Credible, Guan Pengcheng, assistant to the general manager of the business department of the Nanjing branch of Bohai Bank, admitted that the bank had loopholes in the process: “As long as the (official seal) reaches 80%, 85% or more (similarity), it will pass. I did not call the legal person to verify. This may be a loophole in our line."

On October 24, Bohai Bank issued a statement saying that it had called the police.

According to Jimin Credible’s statement, in March 2021, when Wuxi Fangsheng Certified Public Accountants conducted a routine investigation of Shanhe Pharmaceutical, it issued a letter of inquiry to Bohai Bank, and Bohai Bank responded to “Shanhe Pharmaceutical in Bohai”. The bank’s seven deposits totaling 1.01 billion have no freezing, guarantees or other restrictions on use,” said, “After verification by the bank, the letter-certified items are consistent with the information recorded by the bank.”

However, on August 21, Hu Zhaofeng, general manager of the business department of Bohai Bank, admitted to Jimintong that every deposit of Jimintong was pledged within a few days after it was deposited.

Who is Huaye Petrochemical?

In this pledge dispute, Jiminxin also questioned the relationship between Bohai Bank and Huaye Petrochemical.

Jimintong said that during the negotiation process, Dong Mou, the director of the capital department of Huaye Petrochemical, admitted that he had never had any contact with any person at Jimintong, but he had communicated with Bohai Bank for a long time and described how to work with Jimin. The details of the pledge of their deposits without their knowledge.

Chinanews noted that on September 13, Huaye Petrochemical pledged a total of 3,350 shares to Bohai Bank.

In just two years since its establishment, Huaye Petrochemical, whose shareholders have changed four times, has also lost its identity.

There have been media reports that the Huazhiye Energy, which was established on July 9 this year, is 100% controlled by Beijing Huachang Real Estate Co., Ltd., a subsidiary of PetroChina.

So, what kind of enterprise is Huaye Petrochemical?

What role did it play in the whole incident?

In this regard, Chinanews once called Huaye Petrochemical, but the call was never answered.