Commodity prices fall, experts predict that a sharp decline will be difficult to see during the year

Commodity prices fall, experts predict that a sharp decline will be difficult to see during the year Our reporter Liu Qi   Trainee reporter Yang Jie   Since the beginning of this year, affected by multiple factors, the prices of bulk commodities have risen significantly, and the prices of many products represented by non-ferrous metals, energy and chemical industries have reached new highs. T 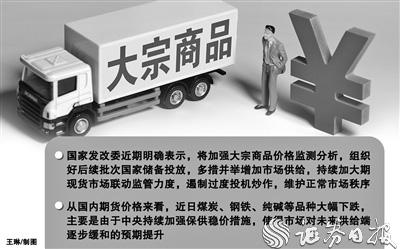 Commodity prices fall, experts predict that a sharp decline will be difficult to see during the year

Since the beginning of this year, affected by multiple factors, the prices of bulk commodities have risen significantly, and the prices of many products represented by non-ferrous metals, energy and chemical industries have reached new highs.

Therefore, the topic of whether commodities will enter the "super cycle" is gradually heating up.

The chief IFCC analyst of CITIC Securities clearly told the "Securities Daily" reporter that the continuous increase in commodity prices is caused by a combination of many factors.

First of all, global liquidity is proliferating, driving up commodity prices; secondly, global demand is repairing faster than supply, leading to a shortage of upstream bulk commodities; at the same time, global demand is picking up, and China has become a global manufacturer and supplier due to timely control of the epidemic. Center, leading to a large increase in domestic upstream bulk commodity demand, while domestic supply capacity is limited, and further constraints such as dual control of energy consumption, safety and environmental inspections, etc., have led to the expansion of domestic bulk commodity supply and demand gaps; finally, there is speculation in the market under the expectation of price increases. This has further led to a rapid rise in commodities.

At the same time, the relevant departments attach great importance to the work of maintaining the price and stabilizing the supply of bulk commodities.

From October 19th to October 22nd, the National Development and Reform Commission issued a document ten times emphasizing the work of ensuring coal supply and stabilizing prices, and put in multiple batches of national reserves such as copper, aluminum, zinc, and crude oil. Recently, it also made it clear that it will strengthen commodity prices. Monitor and analyze, organize subsequent batches of national reserves, take multiple measures to increase market supply, continue to increase the supervision of the futures spot market, curb excessive speculation, and maintain normal market order.

With the development of a series of policy combinations, prices of major commodities have recently adjusted.

In the black industry chain, rebar broke from the October high, with the biggest drop of over 19%.

"From the perspective of domestic futures prices, the recent sharp drop in coal, steel, soda ash and other products is mainly due to the central government's continuous strengthening of measures to ensure supply and price stabilization. The specific measures to intervene in coal prices have increased the market’s expectations for the gradual easing of the supply side in the future.” Dong Zhongyun, chief economist of AVIC Securities, told a reporter from the Securities Daily.

Looking forward to the later trend of bulk commodities, Dong Zhongyun believes that due to the domestic system advantages such as high administrative efficiency and strong policy implementation, the probability that the prices of domestic-led industrial products will continue to rise sharply is low, and the contradiction between supply and demand tends to gradually ease in the future.

For some major internationally-led commodity prices, upward pressure is still relatively high. Taking crude oil as an example, changes in supply and demand will depend on the increase in production by major oil-producing countries and the withdrawal of stimulus policies from major developed countries. There is still room for upside.

"In the short term, the introduction and implementation of the policy of guaranteeing supply and stabilizing prices will, to a certain extent, restrain the disorderly rise in commodity prices. However, from a fundamental point of view, the supply and demand gap of upstream commodities still exists, although with the expansion of upstream production capacity and The release can alleviate to a certain extent the expectation that the prices of bulk commodities will continue to rise, but it is still difficult to see a sharp decline.” It is clearly expected that next year, bulk commodities will face a gradual decline in demand and a gradual expansion in supply, and prices will likely fall gradually.

Obviously, the effects of supply-side policies such as maintaining supply and stabilizing prices have appeared. After commodity prices have fallen, inflationary pressures on the economy will be alleviated and room for macroeconomic policy adjustments and controls will be made.

"Whether it is rising or falling, excessive fluctuations in commodity prices in the short term will disrupt business expectations and production arrangements." Dong Zhongyun suggested that at the policy level, mid-to-long-term industrial planning should be done to achieve mid-to-long-term matching of supply and demand, and at the same time actively guide Market price expectations, through strict supervision measures, curb unreasonable price fluctuations in the short term.