Wang Luodan was executed more than 300,000 yuan in arrears for the project? The studio responded

Sino-Singapore Jingwei October 23rd, the Tianyan Check App showed that Wang Luodan was recently listed as a person to be executed by the People's Court of Changping District, Beijing. The case number is (2021) Jing 0114 Zhi 12123, the subject of execution is 309,605 yuan, and the time for filing the case is 2021. October 20th.   China Executive Information Disclosure Network publicized this inf 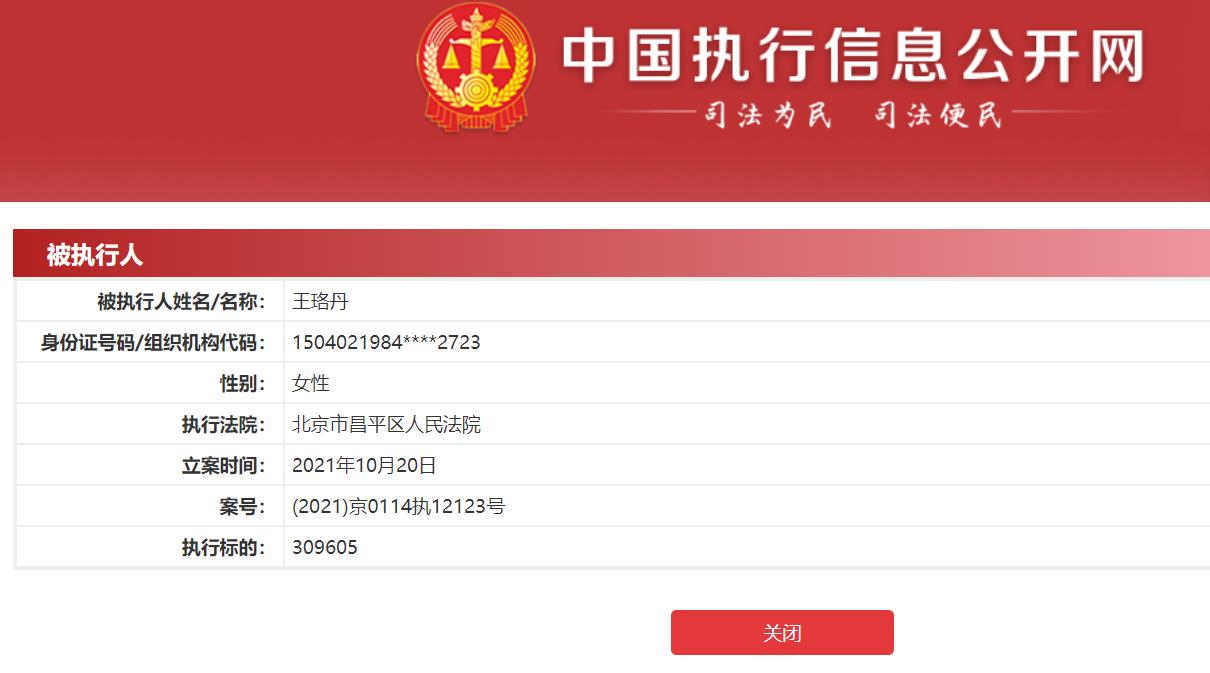 Sino-Singapore Jingwei October 23rd, the Tianyan Check App showed that Wang Luodan was recently listed as a person to be executed by the People's Court of Changping District, Beijing. The case number is (2021) Jing 0114 Zhi 12123, the subject of execution is 309,605 yuan, and the time for filing the case is 2021. October 20th.

According to Tianyancha APP, the related case of the above-mentioned case is a construction contract dispute. In addition to Wang Luodan, the person being enforced also includes his father Wang Weixing.

On November 18, 2019, the first-instance judgment revealed that the plaintiff Hoya (Beijing) Construction Engineering Co., Ltd. (hereinafter referred to as "Hoya Company") alleged that a villa in Changping District purchased by Wang Luodan was renovated, and that it had not obtained a state-owned land use certificate and construction In the case of land use planning permits and construction project permits, his father, Wang Weixing, on behalf of Wang Luodan, contracted the project to the plaintiff, and the two parties signed the "Construction Contract" on December 5, 2012.

After the completion of the project, the defendant failed to organize the acceptance and was in arrears with part of the project price.

The court finally ruled that the "Construction Contract" signed by TAG Heuer and Wang Weixing on December 5, 2012 was invalid; Wang Luodan and Wang Weixing should jointly pay TAG Heuer RMB 309605.1 for the project within ten days after the judgment took effect.

After that, Wang Luodan appealed.

On August 24, 2020, the court of second instance ruled: dismissed the appeal and upheld the original judgment.

The case acceptance fee of the second instance was 8,987 yuan, which was borne by Wang Luodan and Wang Weixing (paid).

This decision is final.

On the evening of October 22, Wang Luodan’s studio issued a statement on this matter, stating that the case was a general civil dispute. It was caused by TAG Heuer’s failure to meet the acceptance criteria due to multiple serious quality problems (such as multiple water leaks) in the house decoration. As a result, there is no such thing as arrears of wages for “migrant workers”.

The statement stated that after the judgment came into effect, Wang Luodan's father contacted TAG Heuer to negotiate a settlement, but failed to contact him many times. Because TAG Heuer had its business license revoked and was listed as a dishonest person, he has not been able to reach an agreement on the method of debt performance.

Wang Luodan's father has remitted the amount to the court account in accordance with the effective judgment document and fulfilled his due obligations.

The court ruled that the two parties have a debt relationship with each other.

Up to now, Ms. Wang Luodan and her family have not received the payment due from the other party, and will apply to the court for enforcement to protect their rights and interests.

The statement also stated that Wang Luodan and his family have not received the court's execution ruling, nor have they been included as a dishonest person for execution on the Internet.