Without "the lowest price on the whole network", Li Jiaqi and Wei Ya can't carry the goods?

Chinanews.com, Beijing, October 22 (Zuo Yuqing) More than 200 million people watched online, and the cumulative sales in the live broadcast room reached tens of billions... After the pre-sale battle on the 20th, the major anchors’ "Double 11" live pre-sales Data is also released one after another. Facing the cumulative transaction volume of Li Jiaqi's 10.7 billion and Wei Ya's 8.3 billion live b 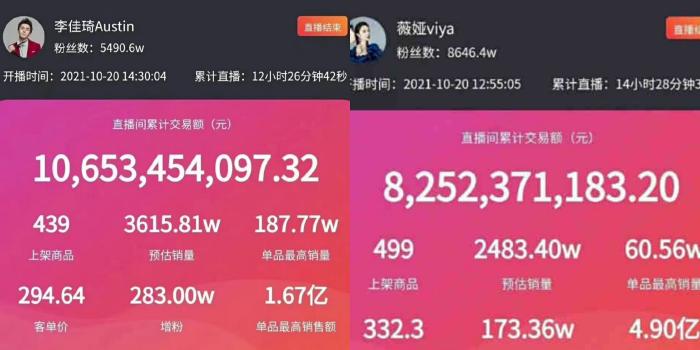 Chinanews.com, Beijing, October 22 (Zuo Yuqing) More than 200 million people watched online, and the cumulative sales in the live broadcast room reached tens of billions... After the pre-sale battle on the 20th, the major anchors’ "Double 11" live pre-sales Data is also released one after another.

Facing the cumulative transaction volume of Li Jiaqi's 10.7 billion and Wei Ya's 8.3 billion live broadcast rooms, many netizens called out: "It's a bit dizzy." "I accidentally participated in two tens of billions of projects."

However, in the pre-sale of live broadcasts in full swing, many consumers said that they only became the "atmosphere group" for a simple reason: "It's not as cheap as before."

"The lowest price of the whole network" disappeared?

The detailed strategy documents, various new gameplays, and the pre-sale time that no longer stays up all night make this year's "Double 11" live broadcast even more internal.

Chinanews found that in the live broadcast room of the head anchor, it is no longer difficult to call out the "lowest price on the entire network".

Compared with the live broadcast rooms of the head anchors, the price discounts, package combinations, and discounts of gift programs are almost the same for many brands of store self-broadcasting rooms.

This also means that the price advantage of head anchors with goods and brand self-broadcasting is shrinking.

On the evening of October 20, the number of viewers in the self-broadcasting rooms of some brands' stores.

Xiao Hulu data shows that in the brand sales of Estee Lauder, the Estee Lauder flagship store ranks second in the contribution of Taobao platform, surpassing the top anchors such as Wei Ya and Sydney.

It is not difficult to see that the popularity of self-broadcasting rooms in brand stores is "catching up" with Internet celebrity anchors.

"The implementation of the'lowest price on the whole network' is only to attract consumers who have not been exposed to live broadcast in the early stage of the development of live broadcast. Long-term low price strategy may affect the brand image." Chen Tao, senior analyst of Analysys circulation industry, told Chinanews.com Now, the "lowest price on the entire network" is being replaced by product portfolios and discounts.

Li Jiaqi, who is broadcasting live.

The screenshot is from Taobao Li Jiaqi's live broadcast room.

Compared with the large fan base of the head anchor, the advantage of the brand's store self-broadcasting room is that the target audience is clearer and users can be accurately reached.

So, leaving the "lowest price on the whole network", do the top anchors still have an advantage over the branded private broadcast rooms?

Chen Tao said that in recent years, brands have become more flexible in their choice of live broadcast methods.

"Anchor + self-broadcast" is the method adopted by many brands now.

In the choice of external anchors, if it is for brand promotion and promotion of new products, brands are usually more likely to choose head anchors or anchors with greater influence; while digesting inventory, brands may be more inclined to choose waist anchors .

In the end, the sales performance of the product still depends on the brand's own image.

Chinanews noticed that even in the live broadcast rooms of the head anchors, the sales performance of various brands is uneven. Some brands are still seckilled, and some have been released for a long time and have not been sold out for a long time.

However, for some consumers, the once "simple and rude" low-price strategy may be even more nostalgic.

"The utilization rate of many gifts is not high, and the demand for combo sets is not high. Although I looked at the discounts, I actually felt that it cost more."

This year’s "Double 11" pre-sale, have you cut your hands?