Will pork prices continue to fall? How about autumn harvest and autumn planting? Authoritative response is coming

Chinanews client, Beijing, October 20th (Reporter Xie Yiguan) How has the continuous rainy weather affected the autumn harvest and planting? What is the trend of pork prices? How to protect the enthusiasm of farms (households) in the face of large losses? How to solve the increase in the cost of growing crops caused by the increase in the price of chemical fertilizers?   On the 20th, the releva 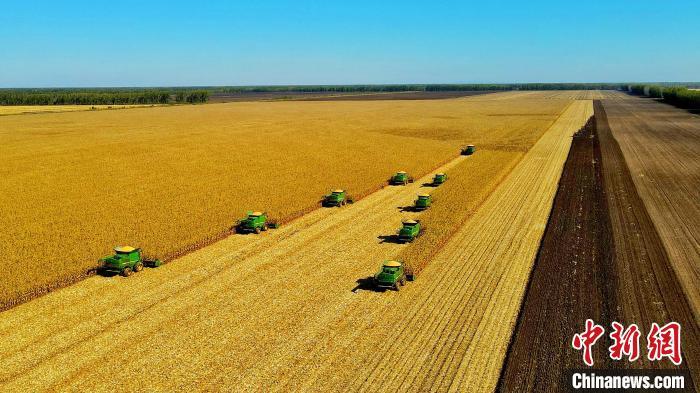 What is the trend of pork prices?

How to protect the enthusiasm of farms (households) in the face of large losses?

On the 20th, the relevant person in charge of the Ministry of Agriculture and Rural Affairs responded to many hot topics at the press conference of the State Council Information Office.

The increase in autumn grain production is a foregone conclusion, and the annual grain output will hit a new high

The corn harvest site of the Hongxinglong Branch of Beidahuang Group.

Regarding the continuous rainy weather in many places recently, Zeng Yande said that the overall impact on autumn grain production is limited.

"From the perspective of the actual harvest and agricultural conditions in various regions, Henan, Shanxi, and Shaanxi have indeed reduced the output of autumn grain due to severe floods and droughts. However, most of the autumn grain production in other main producing areas has increased. In general, the agricultural disasters across the country are less severe than Perennial." Pan Wenbo, director of the Planting Management Department of the Ministry of Agriculture and Rural Affairs, said that the data showed that the area affected by crops this year was about 100 million mu. The average annual crop damage in the past 10 years was 360 million mu. From the area and extent of the damage, the agricultural disasters this year It should be the lightest year in the past 10 years.

In response to the adverse effects and severe challenges of autumn rain on autumn harvest and planting, Pan Wenbo said that in the next step, the Ministry of Agriculture and Rural Affairs will focus on three things: one is to grasp the autumn harvest and to ensure that the particles are returned to the warehouse; the second is to grasp the autumn planting. For autumn planting, we will strive to keep the area of ​​winter wheat from or less reduced; the third is to do a good job in the management of wheat fields before winter and early spring to lay a solid foundation for a bumper summer grain harvest next year.

Pork prices continue to fall, and efforts will be made to stabilize the order of live pig production

At present, pork prices continue to fall, and large-scale losses in farms (households) have become the focus of attention.

"According to the monitoring of the Ministry of Agriculture and Rural Affairs, the slaughtered pigs of designated hog slaughter companies above designated size from January to September increased by 60.9% year-on-year, of which September increased by 95.2% year-on-year. Since late January this year, pork prices have fallen for eight consecutive months.", Ministry of Agriculture and Rural Affairs Kong Liang, the head of the Bureau of Animal Husbandry and Veterinary Medicine, introduced at the meeting that in the second week of October, the average price of pork in the bazaar was 21.03 yuan per kilogram, a decrease of 60.8% from January this year. Reached 76.7%.

What will happen to the pig market in the future?

Kong Liang said that it is expected that the fat pigs listed in the fourth quarter of this year to the first quarter of next year will increase significantly year-on-year, and the relative oversupply of live pigs will continue for some time. If the production capacity is not substantially reduced, the pig price downturn will be difficult to reverse, especially In the off-season for consumption after the Spring Festival next year, pig prices may continue to fall and cause heavy losses in pig breeding.

Kong Liang introduced that starting from June, the Ministry of Agriculture and Rural Affairs has intensively issued early warning information for signs of overcapacity in live pigs, and in conjunction with relevant departments issued the "Opinions on Promoting the Sustainable and Healthy Development of the Pig Industry", and issued the "Implementation Plan for Pig Production Capacity Regulation" (Temporary)", strive to stabilize the order of live pig production.

Since July, the number of reproductive sows in the country has ended its growth momentum and has decreased from the previous month for three consecutive months.

High fertilizer prices, one-off subsidies make up for the increase in the cost of growing grain

In this regard, Tang Ke, director of the Department of Market and Information Technology of the Ministry of Agriculture and Rural Affairs, said at the meeting that the reason for the continuous increase in fertilizer prices is mainly due to the superimposed influence of various external factors.

First, the price of raw materials has risen significantly.

The prices of coal, natural gas, sulfur and other chemical fertilizer raw materials have increased significantly.

Second, the price of international chemical fertilizers has risen sharply.

As a result, China's fertilizer exports have increased significantly.

Third, social inventories are at a low level.

After the end of spring ploughing, fertilizer prices run at a high level, and the willingness to store fertilizer in the circulation link is low.

"Fertilizers are a special commodity related to national food security." Tang Ke said that relevant departments have taken effective measures in time to ensure the supply of chemical fertilizers and compensated for the increase in the cost of growing grain through one-off subsidies to protect farmers' enthusiasm for growing grain.

The first is to ensure the supply and stable prices; the second is to implement subsidies; the third is to fight counterfeiting of agricultural materials; the fourth is to fertilize scientifically.

On the 20th, the National Development and Reform Commission stated that domestic fertilizer prices have risen rapidly this year, reaching a new high in the past decade.

In order to do a good job in ensuring supply and price stabilization in the chemical fertilizer market, on the afternoon of October 20, the National Development and Reform Commission plans to organize the first batch of potash fertilizer reserve releases through low-price auctions.