(Economic Observation) The strong performance of foreign trade supports China's economy to hand over a good answer   China News Service, Beijing, October 18 (Reporter Liu Liang) The National Bureau of Statistics of China disclosed on the 18th the national economic performance data for the first three quarters of this year. Against the background of the current complex situation at home and abroad 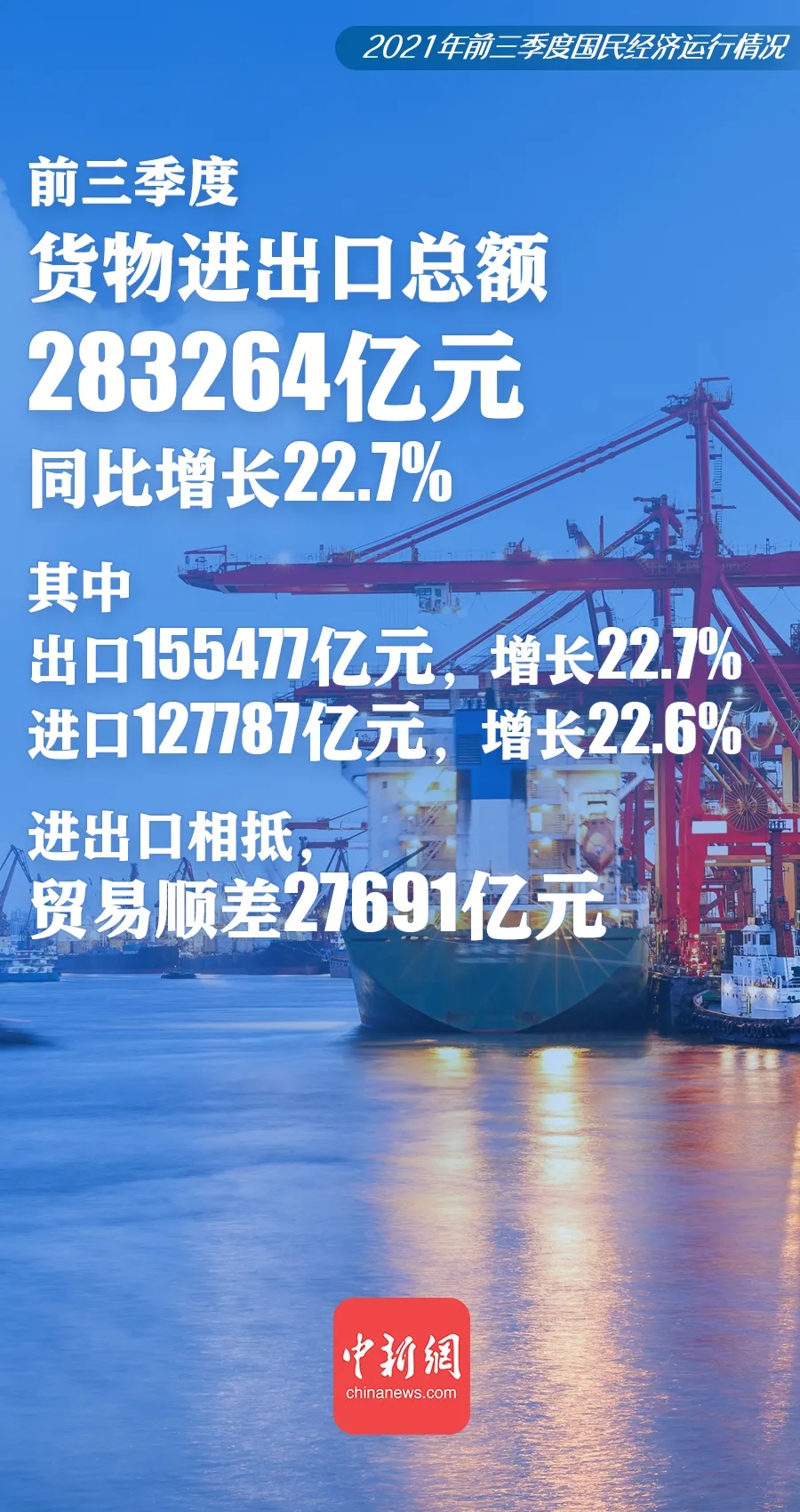 China News Service, Beijing, October 18 (Reporter Liu Liang) The National Bureau of Statistics of China disclosed on the 18th the national economic performance data for the first three quarters of this year.

Against the background of the current complex situation at home and abroad, the strong performance of foreign trade supports China's economy to hand over a good answer.

According to official data, in the first three quarters, the total value of imports and exports of goods was 2,83264 billion yuan (RMB, the same below), a year-on-year increase of 22.7%.

According to statistics, in the first half of this year, the international market shares of China's imports and exports, exports and imports were approximately 13.2%, 14.5%, and 12%, respectively, up 0.8, 0.9, and 0.8 percentage points year-on-year.

China continues to maintain its status as the largest country in trade in goods.

Data show that China's GDP (gross domestic product) increased by 9.8% year-on-year in the first three quarters, of which, in the third quarter, it increased by 4.9% year-on-year, and the overall national economy maintained a recovery trend.

Bai Ming, deputy director of the International Market Research Institute of the Chinese Ministry of Commerce, said that in the third quarter of the national economic pressure, the growth of foreign trade has played an important role in supporting the overall growth of the economy. This is not only due to China’s The series of official measures to stabilize foreign trade are also mainly due to the spread of the external epidemic situation, especially the strong demand for Chinese orders in Southeast Asia.

This is also confirmed in the data.

Statistics show that in the first three quarters, China’s imports and exports to ASEAN were 4.08 trillion yuan, an increase of 21.1%.

Talking about the main reason for the rapid growth of China's trade with ASEAN, the official analysis stated that the bilateral anti-epidemic cooperation continues to deepen to ensure the smooth flow of bilateral economic and trade exchanges.

China continues to provide support and assistance to relevant ASEAN countries in combating the epidemic in the supply of medical supplies, vaccine production, research and development, and to increase cooperation with ASEAN’s economic areas related to the framework for comprehensive recovery.

Bai Ming added that, compared with trading partners in other regions, China and ASEAN are geographically similar, and the degree of inter-industry integration is relatively close. ASEAN has rigid demand for China in many areas, so bilateral trade is more resilient.

As the policy dividends of the China-ASEAN Free Trade Agreement and its upgrading protocol continue to be released, the level of trade and investment liberalization and facilitation continues to increase, and bilateral economic and trade will also be further strengthened.

During the same period, China's major trading partners such as the European Union, the United States, Japan and South Korea also achieved rapid growth, increasing by 20.5%, 24.9%, 11.2% and 17.3% respectively.

In addition, China's imports and exports to countries along the “Belt and Road” and RCEP trading partners increased by 23.4% and 19.3% respectively.

These also add vitality to the overall foreign trade situation.

In addition to external demand, domestic factors have also laid a solid foundation for the continued growth of foreign trade.

Li Yong, deputy director of the Expert Committee of the China Institute of International Trade, said that the volume of foreign trade has steadily increased. In addition to the rebound in external demand, it is important to reflect the continuous improvement of China's foreign trade business environment under the overall high level of openness.

The increased vitality of foreign trade business entities is not only a manifestation of the confidence of various foreign trade entities, but also reflects the background support for optimizing the business environment, especially the recent official emphasis on private enterprises.

It is reported that in the first three quarters, the import and export of private enterprises increased by 28.5% year-on-year, accounting for 48.2% of China's total foreign trade value.

The end of the year is coming soon, what is the future situation of foreign trade?

The official department emphasized that from the perspective of import and export, the world economy is recovering in general, China's industrial system is complete, supporting capabilities are strong, enterprises can flexibly adapt to changes in international market demand, and exports are still expected to maintain rapid growth.

At the same time, the recovery of the domestic economy will also lead to an increase in imports.

In addition, taking into account the impact of the high base of foreign trade in 2020, the growth rate of imports and exports may fall in the fourth quarter of this year, but the overall trend of China's foreign trade will not change, and rapid growth throughout the year is still expected.

Zhang Jianping, director of the Research Center for Regional Economic Cooperation of the Ministry of Commerce of China, reminded that in the face of the current skyrocketing prices of energy and raw materials, as well as high shipping prices, some foreign trade companies may find it difficult to absorb costs.

At the same time, due to the uncertainty of the epidemic and the downward trend in global market demand, China needs to prepare for it.